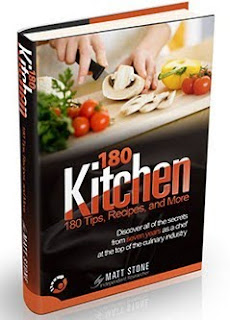 Okay, I’ve slacked a little bit, relatively speaking, but the updated version of 180 Kitchen:?180 Tips, Recipes, and More is complete.

Nearly half a year has passed while I have been left mortified at some of the low-carb one-liners lingering in 180 Kitchen. Well, no more “golfball-sized” portions of starch, dumb recipes for things like a “cream shake” to drink with meals as a fat supplement, and so on.

That’s not to say that I went all low-fat on you guys. Actually, most of the recipes and fundamentals?remain with little to no alteration. At the end of the day, what I feel is by far the most important factor in maintaining good health long-term is being able to make satisfying whole foods-based dishes in your own home – without the addition of ingredients that inevitably turn up when dinner turns all commercial (like vegetable oil, chemical flavor enhancers, refined sugar, and who knows what else).

I still believe, with unshakable solidarity, that the ultimate long-term key to success with any health pursuit?is making enjoyable food in your own home from unadulterated ingredients in the most quick, simple, and time-efficient way possible. This is even more true for those that are in charge of feeding not just themselves, but an entire family of hungry mouths of all shapes and sizes.

For that reason, 180 Kitchen didn’t get the type of major overhaul that 180 Metabolism did earlier this year.

But there were some changes, most notably with the?menu plans.?The most major changes are:

*Original 180 Members can login to the Members area HERE to receive discounts on the new 180 Kitchen and other 180DegreeHealth products.

*To receive?a $5 discount‘towards the purchase of the entire 180 Collection, which includes all the latest versions of the eBooks including the New 180 Kitchen and more, add the Collection to your cart HERE,?enter the discount code “blogdork” and press “update cart.”? This discount code will be good through this Friday.

Those that have already purchased the eBook as is or part of the 180 Collection can use the same 180 Kitchen url to access the new version.