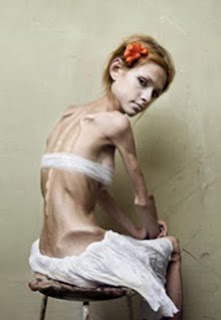 Over the weekend I was asked a question about anorexia, and since my thoughts and feelings about the disease are so vast, I saved my reply to this anonymous poster for its very own blog post (note, that is NOT a photo of the person who wrote the following)?

I have had anorexia for 6-7 years now and I need and want out. I have gone from ?conventional? treatment where people shove ice cream and subs in your face to LC because it helped me mentally calm down and distress, then to VLC and then ZC then back up the ladder to VLC and LC now. I eat a shitload of protein and fat and slowly and upping my carbs. My blood sugar is shot. My adrenals are shit. My cortisol is well, shit as well. I have some incredible hypoglycemia problems. Like another person who commented on your blog, ANY form of exercise sends my blood sugar through the roof. My waking blood sugar is over 100 and stays there until I eat and usually post meal is anywhere from 60-90. I played around with Martin’s intermittent fasting because, yeah I am a dumbass. I am starting your book now, thank you.


I guess my question is this? you have read Ancel Keys ENTIRE starvation study and experiment. Well, I am like the prime candidate for overcoming what those people went through and getting my body out of starvation. Any steps, help, ideas are more than welcome.

To begin with, anorexia is a lot more complex than most people give it credit for. It’s also a lot more dangerous and debilitating than many give it credit for as well. In the words of Furious Pete, former anorexic that nearly died from it ? ?it’s a bitch of an illness.

Most assume that anorexia is purely psychological, stemming from body image issues and a desire to appear like supermodels or something like that. While this mentality can certainly instigate undereating and lead to the powerful physical and psychological addiction that best describes anorexia, once the disease has set in, to say that it is purely psychological is a huge error.

I liken anorexia to addiction. From what I suspect, most cases of anorexia begin with a desire to lose weight. When someone loses weight as we have been discussing at length over the past month, this is accompanied by a large rise in catecholamines ? the adrenal hormones that break down both fat and muscle tissue to be used as fuel. This breaking down of body tissues is referred to as ?catabolism. Catabolism? catecholamines. Coincidence?

Along with the rise in catecholamines comes a rise in neurotransmitters dopamine and beta-endorphin. These are energizing. Pain goes away. A state of subtle euphoria sets in, and we get a little ?high? from it. We are talking about opiate substances here, and they are very addictive ? as addictive if not more addictive than actual opiate drugs. Dopamine? dope. Coincidence?

Anything that causes a big rise in catecholamines typically triggers a rise in beta endorphin and dopamine. That’s why you hear so much ?buzz? from those who practice intermittent fasting for example, on how good they feel, how much energy they have, how clear and focused their thinking is, etc. They are getting a natural high, just like vigorous exercisers get. Very low carbohydrate eating often has the same impact, and while an anorexic can self-medicate by keeping carbs low enough to trigger dopamine and beta endorphin release, it is counterproductive to recovery for reasons explained below.

The problem is when a person with susceptible physiology meets activities and substances that spike these neurotransmitters to great highs. This is what makes the difference between a person that gets addicted and one that does not. What is susceptible physiology? Susceptible physiology is someone who naturally produces LOW amounts of these neurotransmitters for whatever reason ? typically poor nutritional history on behalf of themselves and their parents I suspect, as nutrition needs to be excellent in order to have sound production of these neurochemicals (naturally weak adrenals may in part be responsible as well ? and there’s no doubt that adrenal stressors heighten a person’s susceptibility to addiction).

When levels are naturally low, substances or activities that spike these neurotransmitters are particularly alluring. That’s because a person that naturally has low levels of these neurotransmitters correspondingly has a lot of receptor sites wide open to capture this small amount of dopamine and beta endorphin. Anything that causes a surge of these chemicals causes quite a thrill ride.

At the same time, spiking these neurotransmitters results in what is called ?downregulation? in which some of those wide open receptor sites close down. This is precisely what makes anything that spikes feel good brain chemicals habit forming and addictive. With a low production of dopamine and lots of wide open receptor sites, life feels good, balanced, stable, and normal. But with a low dopamine production and closed receptor sites life feels slow, sluggish, depressing, painful, and so on ? the opposite of a dopamine high.

Once dopamine has been spiked enough, and enough receptor sites shut down ? even if dopamine production is still the exact same as it was to begin with, the person feels nothing but withdrawals and has the experience of insufficient dopamine, beta endorphin, or whatever. They need increasingly larger spikes of these neurotransmitters just to feel normal, much less good, just like any true long-term drug addict or alcoholic.

This is exactly the pathology of anorexia. A susceptible person starves him or herself. When that happens, beta endorphin and dopamine levels rise ? making the person feel VERY good at first. If a person manages to fight their hunger signals hard enough, and long enough with a large motivating factor such as body image issues to override natural physical feedback?

Then receptor sites start to shut down. Undereating, at this point, then becomes self-perpetuating and the normal hunger feedback loop is broken. Resuming eating once again induces instant withdrawals for which abstaining from eating is the medicine. Undereating, from a functional standpoint, becomes a drug to get a dopamine and beta endorphin feel-good fix. Without it, a person feels miserable physically, and depressed, lethargic, and dark psychologically. At this point, anorexia is not something that can be cured with a Club sandwich any more than a heroin addiction can be cured with a Club sandwich.

Before I go indefinitely on this addiction/anorexia tangent, let me get into specifics in terms of the questions that were asked in the email I received above?

I imagine a typical anorexic seeking recovery is at odds with themselves, frustrated as to why they can’t just eat when they know they need to, and confused at all the terrible physical and emotional trauma they experience when eating. To get to the other side, it really takes full recognition of the problem, how to fix it, and a whole lotta self compassion. Otherwise you’ll just beat yourself up for not eating instead of realizing exactly why you don’t want to, taking it easy on yourself because of it, and taking the proper steps knowing fully that it is going to be a major hellish battle that every cell in your body will try to resist.

To recover, I believe that there is no way around achieving ?upregulation? in which the receptor sites for beta endorphin and dopamine open back up again ? allowing you to feel normal with your naturally low production of those neurotransmitters instead of experiencing too little and having an unquenchable thirst for anything and everything that spikes it.

A very low carbohydrate diet, in the short-term, could very well make for a substitute for anorexia, as could very strenuous exercise, as could various psyche meds and stimulants. However, that is ultimately trading one form of addiction for another, and is not genuine recovery. However, it can make for a great stepping stone.

But ultimately upregulation must occur. For this to happen, it is essential to focus on doing everything possible to keep beta endorphin and dopamine levels as low as possible. This, ladies and gents, is brutal for someone with downregulated receptor sites for these chemicals. The withdrawals can be major.

For someone seeking to keep these levels as low as possible, major tactics include:

1) Eating frequent, starch-based, whole food meals at above-maintenance calorie levels. The food should actually be somewhat bland, in whole food format, with some, but not too much added fat or protein (protein raises adrenal hormones and associated neurotransmitters, and really good food, especially sweets mixed with fat, triggers a big release of opiates that you are looking to avoid). A non-vegetarian macrobiotic-ish diet would actually be decent for recovery. This will also help in fixing reactive hypoglycemia, which I would guess nearly all anorexics suffer from to some degree (although it too will exacerbate hypoglycemic symptoms in the short-term).
2) Sleep a lot, including regular naps.
3) Perform various relaxation techniques, from gentle yoga and breathing exercises to meditation.
4) Avoid stress as much as possible.
5) Avoid strenuous exercise.
6) Avoid stimulants.
7) Avoid drugs ? recreational and psychoactive.
8) Avoid sweets.
9) Avoid anything overly pleasurable. The more miserable you are, the faster you are upregulating.

This is obviously a lot to ask for, and would require tremendous support from family members, loved ones, and potentially demand professional assistance like that required for a drug addict attempting rehabilitation. Unfortunately, I’d venture to guess that most professional eating disorder rehab joints, just like most drug rehab joints, provide many forms of self-medication from candy to cigarettes that lessen withdrawals and limit true fundamental healing of the core problem.

Once you have upregulated, be very cautious about meal-skipping, drugs, stimulants, stress, and other adrenal stressors that can cause a relapse, as your sensitivity to such things is greatly heightened in an upregulated state.

Bulimia shares a similar pathology. Know how miserable you feel right before puking and how euphoric and instantly healed you feel immediately after vomiting? That’s some endorphins for you. Addictive as hell if you do it enough to start shutting down your receptor sites.

More on reactive hypoglycemia in a blog post this Thursday ? something many chronic dieters, hypometabolics, and adrenal gland punishers experience given sufficient time.