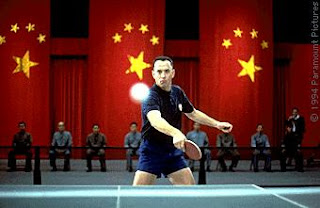 Okey dokey, so maybe I haven’t quite had the opportunity to post videos like I had planned. The trip has been a mega whirlwind, and totally fun. The best part was giving Rob A. the schooling of a lifetime in ping pong. Yeah, I totally brutalized the poor kid. I went totally Forest Gump on him. Only the exact opposite. Yes, sadly, I learned a very hard lesson. Never take on someone in ping pong that is living in a desolate lodge in the middle of nowhere with nothing to do other than play ping pong in the basement.
I’m looking foward to my meeting with another 180 follower later this morning. He has requested that I hang upside down from his little batman device and “do some Mercola tapping” as he put it – followed by cleaning out his garage. No respect I tell ya. No respect.
To top it all off I’m meeting someone for lunch who answered his phone by asking me if I have ever seen a grown man naked. Should be interesting.
Anyway, here is another video clip of Challen talking about some of the interplay between vitamin C, pH, sugar, and cancer in response to a cancer question I posed to him (that he slightly dodged because of the liabilities involved with talking about cancer). But his response was perplexing, and put the focus more on some simple fundamentals of healing.
Also, someone apparently captured’some video footage of Pippa and I in our travels. You can see in the video’that I have gotten quite lean and my hair?is really growing fast!!! But I’ve maintained my strength as you can see when I arm wrestle JT in the opening scene. Only problem is that my voice has gotten very high-pitched and Pippa is looking somewhat masculine – almost like Paul McCartney. Haven’t figured that out yet, but we are working on it…
How to RAISE YOUR METABOLISM.