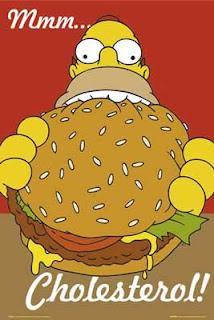 ?Norm! Do you have a good article on your blog about cholesterol? My co-worker is afraid of cheese because of it??
~Text message received Wednesday from my buddy from high school (we call each other Norm, which we used to shout at each other depending on who was more late to first period ? like the show Cheers ? no, we weren’t really the cool kids).

In honor of Norm, and continuing with our discussion of the work of Ray Peat, today we discuss the evil and villainous cholesterol!!! How do we keep this villain from jumping all up in our arteries, clogging them off, shutting down the flow of blood, and giving us heart disease, stroke, and heart attacks?

Ah yes, about that. Well, that’s what we hear about how heart disease works. It’s like a clog in a drain. It makes sense. We can visualize it. We’ve also been told that saturated fat, which is solid at room temperature (but liquid at body temperature), makes our arteries clogged like that, with a bunch of white, grisly fat. We can visualize that too. This has all been very powerful propaganda against cholesterol and saturated fat. But in actuality, cholesterol and saturated fat have nothing significant to do with heart disease. In fact, in the right context, saturated fat can have a protective role against it. Cholesterol in food has basically nothing to do with anything, unless you are one of those that are phobic about oxidized cholesterol from cooked foods and powdered milk (which I can’t imagine having much significance).

Hell, even clogged arteries in the traditional sense aren’t the cause of heart disease. In fact, it’s been reported that arteries that are more occluded (blocked) tend to have more stable plaques than arteries that aren’t as clogged, that instead tend to have raised lesions that break free more easily (causing actual coronary thrombosis, which is a sudden, acute event). And yes, in coronary thrombosis (blood clot ? one of the most common types of fatal heart disease), the blood clot blocks the artery ? not cholesterol!

Anyway, I could go off on that tangent for days.

What I like about Ray Peat’s work is that it takes an intelligent look into human physiology. Even the most basic glance into it reveals how dumbed down the heart disease/cholesterol story that we are spoon-fed really is. I mean, good cholesterol and bad cholesterol aren’t even cholesterol! They are lipoproteins! That right there should send shivers down your spine (Oh, they don’t need to know that. Let’s not confuse them. Let’s just tell them that the type of lipoprotein this medication lowers (LDL) without increasing life expectancy by a single day ? even in studies funded by drug companies, is ?bad? cholesterol. That’ll work great. They already think cholesterol is bad. Bad cholesterol is like, whoa man, totally EVIL!).

In terms of diet and lifestyle, cutting saturated fat and cholesterol out of your diet, doing lots of ?cardio,? and taking cholesterol-lowering medications is akin to stopping the bleeding on a head laceration (from say, head-butting your physician like Johnny Lawrence recently did during one of his volleyball games with Jimmy) by having a bowl of Cheerios with low-fat milk, distorting your genitals into an animal-like shape with your hands, and doing an Acai berry fiber-smoothie belly blast cleanse (This cleanse is fictional. Any likeness to an actual product or program is purely coincidental). This is actually a bad analogy, as there aren’t billions of dollars worth of studies already showing that those lifestyle modification don’t work ? in the case of genital distortion there is actually a chance it could have a pro-thrombotic effect, we just haven’t studied that yet to find out.

Billions of dollars spent unsuccessfully trying to establish saturated fat and cholesterol?ingestion as the cause of heart disease?? Epic Fail.

The biggest study of course, the Framingham Massachusetts study, didn’t necessarily come to the conclusion that we should be a bunch of salad-slaying cheese phobes?

Actually, let’s look at that quote in terms of Ray Peat, as this allows us to explain how such findings are plausible, and tell the real physiological story of cholesterol.

If Ray Peat, a wealth of knowledge about human physiology is correct ? and I have no reason to think he is not because it ties lots of pieces of the puzzle together for me, cholesterol is a precursor to our steroid class of hormones. According to Peat, the LDL molecule, which contains cholesterol, is first converted into pregnenolone. The hormone pregnenolone is then converted into hormones like DHEA, testosterone, and progesterone for example, as well as others.

Of course, DHEA, testosterone, and progesterone are some of the most well-known anti-aging, anti-heart disease substances in the human body. These hormones all decline as we age, which is one of the reasons why we become increasingly susceptible to heart disease as we age (and diabetes, stroke, cancer, Alzheimer’s, yada yada) ? not to mention sex drive falls, ability to reproduce plummets, muscle mass evaporates, body fat is stored more readily, the skin loses its elasticity, and we cannot run and jump and lift like we can in our youth when these hormones are peaking.

What controls the rate of conversion of LDL into these youthful hormones? The metabolic rate does ? or more precisely, the level of active thyroid hormone production and utilization. When we are young, metabolic rate tends to be higher ? and we produce more of the youth hormones. As it falls, we produce less of the youth hormones. This is a bummer. In fact, progesterone, produced in much larger quantities in women than in men, is so powerful that pre-menopausal women, unlike men, are almost completely protected from this disease during middle-age.

So when you see someone eating more cholesterol, more saturated fat, and more calories (like a young person vs. the elderly), you see a correlation to greater leanness, more physical activity, lower cholesterol levels, and less heart disease. And this is NOT because cholesterol levels are lowered because cholesterol has no causative role in heart disease. Rather, those who eat more and move more have HIGHER METABOLIC RATES per pound of body weight. The cause for the reduction in heart disease incidence is the same as the cause for lowered cholesterol ? a higher metabolic rate yields greater production of the protective hormones of youth (age is always the top risk factor for almost any degenerative disease). This clears the LDL, turning it into something else.

This is why, still to this day, by far the most successful physician in preventing heart disease was Broda Barnes. He reduced heart disease incidence by over 90% compared to the heart disease rate seen in the famous Framingham study. His success came as a result of keeping the metabolic rate of his patients elevated. His conclusions about diet weren’t necessarily on par with today’s saturated fat paranoia?

Looking further into Peat, with a desire to keep the metabolic rate elevated, you see two diverging effects of the unsaturated fats recommended for ?heart health? and the saturated fats labeled as ?bad fats. The polyunsaturated fats, like those found in peanut butter and vegetable oil (grapeseed, canola, soy, corn, cottonseed, sunflower, safflower) lower thyroid/metabolism, primarily through interfering with the conversion of active thyroid hormone T3 and entry of T3 into the mitochondrion where it stimulates metabolic activity at the cellular level.

On the other hand, many saturated fats perform the opposite service. Butyric acid, a short-chain fatty acid found in greatest abundance in butter, whole milk, full-fat cheeses, and cream ? is the most metabolically-stimulating fatty acid of ?em all?

?The active fraction of the thyroid hormone, triiodothyronine, or liothyronine (T3), is essential for the conversion of cholesterol to pregnenolone, as is the retinol form of vitamin A. Butyric acid is known to facilitate the entry of T3 into the mitochondrion.
~Ray Peat

The best source of this fat is not ingested at all, but manufactured from the fermentation of starches and indigestible fibers in the digestive tract. I’m talking about fiber of course. Fiber typically performs very well in clinical study, with many studies showing far-reaching pro-metabolic effects of fiber. The question is why would fiber do that? It’s not even digested. It’s obvious it has nothing to do with slowing down glucose absorption or some of the common supposed virtues of fiber. The irony is that the reason that fiber is healthy ? the stuff all those people are telling you to eat while reducing your saturated fat intake, is the fact that it is converted to saturated fat! (Although, this isn’t just any saturated fat ? there are dozens of types of saturated fat, and butyric acid is just one of them).

Still, there’s no question that saturated fat is not the enemy. It does not raise cholesterol on a long-term basis. I mean sure, if you have a low metabolic rate and you throw a bunch of saturated fat into it, you might see a temporary rise in cholesterol levels. But over the long-haul the metabolic stimulation it provides (although I’d say carbs do it better, generally-speaking) is likely to cancel that out and maybe even lower your cholesterol as you convert more of it into powerful anti-aging hormones like Martin did.

In some respects, stress (the broader definition ? as in, anything that can induce stress hormone production and inflammatory processes? from allergies to chemical pollutants to nutrient deficiency to being poor) is the unified cause of disease, especially heart disease. Eating well ? plenty of calories, plenty of carbohydrates, and favoring saturated over unsaturated fats, sleeping well, moderate exercise with ample recovery, ?meaningful work? ? those are the keys to keeping metabolism high and stress hormones low. It’s not rocket science. And it’s certainly not what is masquerading as science to make a buck off of the erroneous cholesterol scare. Health enhancement and preservation comes from small but significant changes, not drastic and dangerous ones.

Don’t fear the cheese. The only way it could increase your risk of heart disease would be if you were allergic to it and ate tons of it on a daily basis ? a potent form of stress (but even that is not a root cause, as you can most likely overcome such allergies by restoring the health of your metabolism as a whole).

Oh and dietary cholesterol? Ha. That doesn’t have any significant effect on your cholesterol levels or heart disease risk at all. That can certainly be removed from the ?Nutrition Facts? labels on all the food-like products we buy.

To live the longest and most disease-free life you are capable of living, restore, maximize, and defend your metabolic rate. You can learn some great tips on how to do that with diet and lifestyle manipulation alone by reading this book on how to raise your metabolism.

?To my mind, the true underlying cause of heart disease is ‘stress? and it’s standing right in front of everyone, jumping up and down, going ?Hello, look here, it’s me!… Will you please ignore LDL levels? I SAID LOOK OVER HERE! Oh forget it???


?Wherever you look, you will find that hundreds, even thousands of studies have been done. They all show exactly the same thing. Stress causes heart disease. It can be long term, it can be short term, it can be physical or psychological. It doesn’t matter, the HPA-axis converts all types of stress into the same deadly mix.
~Malcolm Kendrick; The Great Cholesterol Con (a must-read for anyone with cholesterophobia)

?Stress is the greatest accelerator of atherosclerosis, have respect for it.
~Broda Barnes; Solved: The Riddle of Heart Attacks

P.P.S. – Welcome to Jessie, the newest member of the 180 Hot Chicks Club, who sent me the following photo. She likes 80’s references, so be thinking of alternate lyrics to “I wish that I had Jessie’s girl…”? Like, I don’t know, I with that I had Jessie’s pits, or temps, or glands or something. 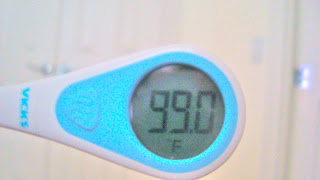