If you’re looking for a way to gain body fat in proportion to lean body mass, let it be known that the most efficient means of achieving that lofty goal has been known since 1950. Cut calories.

In 1950, an experiment was performed by Ancel Keys on a group of 32 young men in relatively healthy condition. The idea behind the experiment was to study what happens under situations of famine. These brave young men were thus put on a 1,500 calorie diet (more than some weight loss authors recommend) that was continued for a period of 24 weeks. What happened to them was breathtaking – and the 1300-page monster of information that Keys and his colleagues managed to produce detailing the study makes it, quite possibly, the most well-controlled,’superbly-documented,?and irrefutable study that has ever been conducted on the human response to a low-calorie diet.

But they didn’t just track how they did during the 24 weeks of starvation. As interesting as that is, in and of itself, what I find to be more pertinent in today’s day and age of caloric abundance is what happened to them after going down to 1,500 calories for 24 weeks.

Here?are some snapshots of the data graph piece by piece. What the?first graph shows is changes in?overall body weight (dark circles)?and fat levels (hollow circles) during the 24-week starvation period. As you can see, starving on a low-calorie diet made them lose overall body weight, and a substantial amount more body fat than overall weight. In fact, you can see that they lost?nearly 70% of their starting body fat by the 24th week. 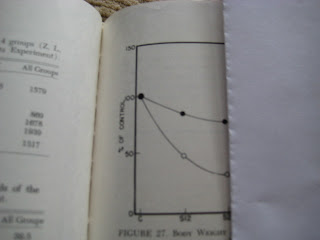 Next you can see what happened to them in the first 33 weeks of refeeding. This is almost 8 months of eating as much food as they desired. Initially, caloric consumption reached a level of nearly 6,000 calories per day. Even when men were physically incapable of ingesting more food they mentioned a persisting sensation of hunger – even right after eating. Sound familiar dieters?? This phenomenon in response to caloric deprivation is a well-understood fact that obesity researchers refer to as “rebound hyperphagia.”? At week 33 of refeeding, body weight and body fat levels peaked. You can see that even though weight didn’t go much higher than starting levels during this phase, body fat levels were substantially higher – peaking at 40% higher than they were at the start of the starvation experiment. Unfortunately, it’s at this point that most dieters get disgusted with their “lack of willpower” and take the plunge into another restricted diet of some sort that triggers this same infinitely counterproductive phenomenon again. 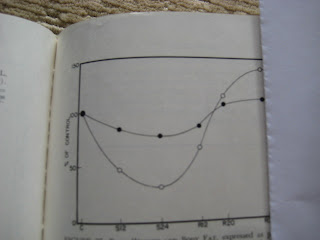 After 33 weeks of refeeding the men start to achieve what I would call “metabolic healing.”? An ambiguous term perhaps, but what else would you call it?? You can see that fat stores drop much faster coming down the home stretch than body weight, suggesting that muscle, bone, organ, blood, and other tissue losses are being replaced between week 33 and week 58 of refeeding. Even so, at the end of 58 weeks – more than an entire year of refeeding, the men still have more body fat and weigh more overall than they did at the beginning of the experiment, although you can clearly see that they are well on their way to once again becoming healthy young men in automatic, willpower-free energy balance. Total weight gains were a few kilograms, 5-10 pounds overall. 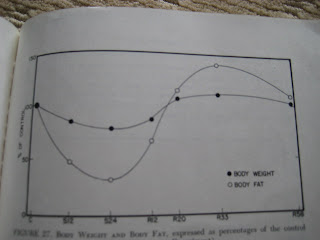 There are two important lessons to be learned here. The first, is that cutting calories is a doomed strategy for improving your ratio of body fat to lean body mass. There is no suggestion that being overweight will make this work any differently as any overweight person with a history of yo-yo dieting can tell you. Sadly, the person often blames his or herself for lack of will to keep weight off, when it is an almost physiological certainty that it will lead to increased body fat. Using exercise or a calorie deficit seems to make little difference in how this scenario plays out. Having access to such irrefutable and concise knowledge since 1950 makes what the Weight Watchers and Jenny Craig’s of the world peddle for weight loss a criminal act. Rest assured that if 180DegreeHealth becomes the powerful, pervasive entity that I envision it one day becoming, I vow to file huge lawsuits against these companies and stir up a full-blown media debacle over it.
The 2nd lesson to be learned is that it takes time and patience to eat as much food as your body demands before muscle, bone, organs, blood, and tissues are restored to optimal levels and accumulated body fat begins to disappear. Although the starvation that these men endured was extreme, keep in mind it was for only 24 weeks. Many dieters have gone decades before ever coming to their senses and finding an intelligent source of information like this. But all we can do?is nourish ourselves well, enjoy life, and be patient. That is the only path’to recovering our metabolic health from years of dieting suicide, but it can happen, and will happen, if you stick with it.
I also believe that?insulin and blood sugar levels, if you are?a type 2 diabetic, will also follow?a similar trajectory. We all know that cutting calories and overexercising provides temporary improvement to blood sugar and insulin levels – just as it provides temporary weight loss. But the aftermath is a bitch. To?overcome insulin resistance and type 2 diabetes, assuming your pancreas still produces sufficient insulin, eating to appetite – and even beyond your appetite?(which I believe jumpstarts the healing process), is the solution. Gobbling starch and all.
Read more about this in my eBook on How To Raise Your Metabolism.