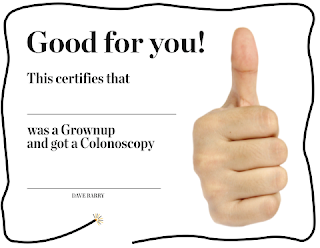 Last night, it was announced by my brother-in-law during dinner (ALWAYS while we are eating – is my family the only family like this?), that he will be going in for a colonoscopy later this week. Then, to my horror, other family members chimed in and started talking about their colonoscopies. I decided to eat in peace, and not get into it.

With many things in mainstream medicine, people have begun systematically going in for routine check-ups on certain things as if it is some rite of passage somehow – like twice annual fluoride treatments. This is good business, but going in for a?colorectal screening?is typically unnecessary, can be dangerous due to bowel injury (perforation), sedative side effects, and side effects from bowel preparation (with colonoscopy), and in the case of barium enemas and CT colonography, it exposes you to massive amounts of radiation. And, at the end of the day, it doesn’t do much for you even if they do find cancer while they’re snooping around.

Having perfect digestion is the best preventative step one can’take to prevent colorectal cancer. I would describe that as being able to eat a wide variety of foods without bloating, indigestion, painful or excessive gas, foul fecal odor, foul gas odor, hard stools, overly loose stools with the typical pain, burning, and discomfort?of diarrhea, and little or no need for wiping. Movements should come twice daily, be soft, and pass in seconds without straining. Anything less than that?and you should keep searching and experimenting for a way to achieve that. That is how you prevent colon cancer.?Standard colorectal screening?is not the answer, and can do tremendous collateral damage while giving you?limited protection even if there is early detection.

Just like many medical screenings, such as mammograms,?colorectal cancer screening is a false safety net that is often served with a baked potato of radiation with all the fixins, and makes a lot more cents than sense. It may?come as a’shock, but the American Cancer Society and the American College of Radiology endorse the kind of’screening that gives you a massive dose of radiation!

Sure, if you are 73 years old, both parents died of colorectal cancer, you’ve had IBS your whole life, and your ass is now mysteriously bleeding?- by all means go get screened. But this is not some test that the mainstream public in the low-risk category, like my brother-in-law,?needs to be getting routinely.