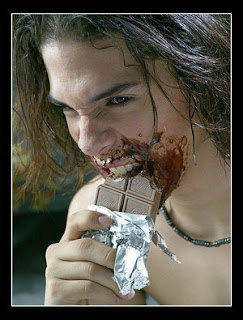 First of all, man am I glad to be back home. New York City was awesome this trip, and I’ll be writing about my food adventures there at http://180kitchen.wordpress.com/ very soon. But all in all it felt like a competition to see how much caffeine, alcohol, sugar, nitrates, and vegetable oil I could get into my system. I’m more than ready for a breather from that. I’ve never been so glad to see ground beef, coconut oil, sweet potatoes, and spinach. In fact, the burger I ate for breakfast this morning was so large I started singing ?Everybody Wants Some. I actually filmed it below. Any resemblance to a young John Cusack is purely coincidental.

Anyway, time to discuss what is a huge and extremely prevalent problem in the modern world ? emotional eating.

As discussed in many prior posts, food triggers a response in the pleasure centers in the human brain, acting on pleasure neurotransmitters like serotonin and dopamine. It is no surprise that when many people feel a sense of chronic stress, anxiety, shame, guilt, and so on ? food becomes not just a way to fuel oneself, but a form of psychoactive medication. And in general, what provides the highest pleasure response is?

1) Rapidly-absorbed foods like white flour and liquid sugars
2) Sweets, whether natural as in honey, refined as in sucrose, or non-caloric
3) Calorie dense foods ? like French fries, pizza, brownies, ice cream, or cheesecake
4) Alcohol and caffeine-containing drinks and substances
5) Foods with flavor enhancers like MSG found in most fast food and highly-flavored stuff like Cheetos or Doritos
6) Foods with low water content ? that are therefore very calorie dense (butter, oils, nuts, dried fruit, chips, crackers, cookies, bread)
7) High-calorie liquids such as soft drinks, fruit juices, whole milk, half n? half
8) Large quantities of food in general, of any kind

This is a 2-way street, as eating some of these foods, particularly those with the highest capability of triggering a pleasure center response like a fast food meal with a large sugary drink and a dessert all mixed together in one hit, can in turn cause massive emotional fluctuations. First a high, followed by a crash, which is addiction pathology 101 and can be caused by anything that is unusually, and unnaturally, pleasurable.

It works the other way as well. Chronic stresses such as the loss of a loved one, self-esteem issues, relationship problems, being in an abusive situation, financial stresses, and other problems that are of a chronic nature have a tendency to activate the same hormonal changes that a famine is capable of inducing. That is, an increase in cortisol production as well as synthesis in fat cells themselves. Hypercortisolemia, induced by any form of chronic stress from famine (the reason we are designed to have this fat storage response to stress in the first place ? marked by a drop in metabolism, reduction in fat burning, increased production of fat storage enzymes, increased appetite, increased cravings) to depression to sleep deprivation can all trigger an increased appetite for the things on the above list.

This is why calorie restriction combined with a huge exercise load has the following impacts on a typical person?

1) Increased alcohol, sugar, and caffeine cravings ? along with foods with very high calorie density and huge quantities of overall food in general
2) Increased appetite
3) Reduced body temperature
4) Increased risk of infection
5) Decreased desire for physical activity (as well as sex and other calorie-burning activities)
6) And so on

Likewise, following the guidelines laid out in how to RAISE YOUR METABOLISM?brings about the exact opposite set of changes.

Anyway, ending emotional eating is not difficult. In fact, most people have emotional eating issues to begin with because of chronic dieting, undernourishment, insufficient sleep, and excessive stress in the first place. It all starts with feeding yourself well as in?eBook DIET RECOVERY?explains.

Helpful tips include eating a diet that keeps you even keel emotionally. No one ever could have convinced me of the power of eating a well-balanced, calorically-sufficient, whole foods diet without excessive exercise and adequate sleep on emotions until I actually tried it religiously. Like Jon Gabriel mentions in this fantastic interview, ‘there are no more good days and bad days. You are more or less anti-dieting at that point.

Another helpful hint is to eliminate substances you know you are addicted to WHILE EATING WELL and RESTING WELL. Eliminating addictive or problem foods that have been a target of emotional eating binges for years does not work if you are depriving yourself of anything. Otherwise you will increase your cravings for those ?problem? foods as each day passes. With the right set of nourishment and minimal stress from intense exercise regimens ? as well as plenty of time for rest and relaxation, there is simply no low serotonin and dopamine state occurring in your brain that causes the outrageous cravings to eat foods that spike those feel good neurotransmitters into the stratosphere.

By keeping yourself even keel with consistent sleep patterns, regular mealtimes, no skipped meals (or at the very least not skipping meals when you are hungry), and plenty of calories at each feeding to leave you feeling satisfied ? there is simply no low state in need of medicating with food and drugs.

The real problem is that people are under all kinds of emotional stress, work stress, lack of sleep, and more while at the same time thinking it’s healthy to eat as little as possible, or at the very least go to war with fat, carbohydrates, or animal products while exercising as much as they can stand to.

This is what CAUSES emotional eating in the first place, exacerbated of course by the halo of guilt that a person experiences after eating junk food and the shame and loss of self-esteem that they feel over whatever excess fat they carry after each episode.

Would you try to raise a healthy baby by depriving it of food, making it feel constantly scared, torturing it, yelling at it for being fat, weak-willed, and lazy, not letting it sleep, and forcing it to do a lot of exercise? No. Then why are you pursuing health by trying to do that to yourself?