Since the early days I’ve been talking about many of the transgenerational phenomena when it comes to human health. By transgenerational I’m talking about stuff that is not?”genetic” (like how we are coded to have two eyes, two ears, and ten fingers), but outside dietary and lifestyle forces that affect our heredity -?everything from fatty acid imbalances to heavy metal buildup to?low nutrient levels to stressful?events to the ability of your parents’ weight loss attempts or stupid health ideas?and how it can?plop you into the world with a “thrifty metabolism.”??The most thorough writing I did on it was in 180 Degree Diabetes in a chapter entitled “Nutritional History.”

Anyway, the following video passed along to me by frequent 180 Commentor Kash Money (warning, intentional cheese slinging coming up…)?really rang my register. I was like, Ka-Ching! Put that in the bank and watch it make 2% while the?price of everything goes up 20 times as much. It’s money baby! 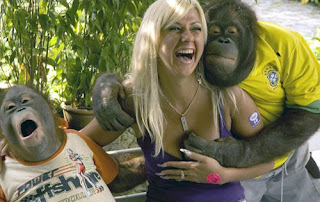 Sorry, too many hours at the beach and too many tangerines today (Florida). Just trying to mimic the diet of JT’s personal hero Clyde the Orangutan for a day (it’s cool, he’s mine too).

Oh the video, yeah. It’s about Epigenetics and how the human body has developed an incredibly complex system of on and off switches in response to various environmental factors that help prepare the future offspring for’the upcoming world it’s about to enter into. When you let the true significance of that set in you realize just how profound and mysterious and?most of all – important epigenetics really is. So much for low-carb Paleo diet theory, the last few generations probably have a lot more to do with our “blueprint” than the?ancient one, and the low-carb adapted folk?out there left the gene pool quite a while back (Except for Gary “Nanook” Taubes?who was raised by Eskimos before becoming a journalist soldier in a vicious Macronutrient War against the invisible enemy Insulin Bin Laden).