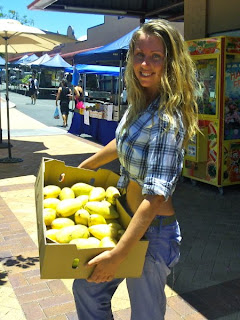 Recently I’ve been trying to take it easy on my friend fruit. For years I’ve advocated an entirely sugar-free approach to overcoming certain health problems, and when my diet was very high in fat, fruit was a major aggravator of health issues ? like tooth pain, them little tongue bump things, emotional irrationality, joint pain, allergies, asthma, and fat gain ? and zits too. Aurora’s response is identical, only worse on many of those fronts. Same for dozens of others that I’ve had these discussions with.

However, my past experiences with fruit weren’t necessarily congruent with my newer, more recent condemnations of fruit. For example, in 2005 I did all kinds of ?cleanses? and forever improved my health doing so. These cleanses were based primarily around sweet fruits, fruit-only smoothies, sweet vegetable juices, and raw vegetables ? with no added fat or protein (these foods all have some fat and protein though). During these cleanses, I ate as much food as I cared for.

They were awesome. My skin got incredibly clear. Fresh breath and body odor. Teeth actually got whiter, stronger, and cleaner feeling. Energy levels were pretty good, although I had a tendency towards feeling really hungry and a little light-headed. Digestion saw permanent improvements. I went from being a smelly farter to an odorless, nearly non-farter in the course of like, a week. Seasonal allergies went bye-bye. It was pretty cool, despite losing considerable amounts of muscle mass in short periods of time on these bad boys.

But then I jumped onto Schwarzbein (not literally?damn), and experienced the opposite. For those who aren’t familiar, Schwarzbein is a meat, starch, veg, and added fat, three squares a day kind of lady. Following her guidelines with a little bit of a Weston A. Price Foundation twist (raw dairy, fermented veggies, etc.), I experienced a huge drop in hunger, rapid muscle gain without exercise, disappearance of sugar cravings (whereas I couldn’t go 2 hours without craving fruit prior to that), and tremendous emotional stability. It was pretty amazing ? probably the perfect counterbalancing regimen to the fruity, muscle-wasting place I had come from.

This was short-lived however, and it only took me 6 months to start running into trouble ? from being on a prolonged low-carb diet compounded with the adrenal workout of overexercising.

Anyway, the reason this is all on my mind right now is this?

1) I’m doing a lot of hiking right now. It’s the summer in Colorado, and I want to be able to hike and not have highly negative health consequences from it like I experienced while hiking a lot on a low-carb diet. A low-carb diet is also highly inferior to a high-carb diet for endurance athletic performance. I didn’t realize this at first, because on a low-carb diet I was using fat for fuel, which is a nice even-keel energy source. Because of that, I never got tired and never got hungry and didn’t lose muscle mass. It seemed, while hiking by myself, that my performance was actually improved. It wasn’t until I started hiking with people who I used to hike circles around that I realized just how much my pace had slowed. I literally couldn’t keep up ? even when I went out with a middle-aged fish biologist ? a sedentary office worker most of the time, with a big belly and little toothpicks for legs (this despite my 6-pack and chiseled tree trunks).

2) Although I experienced hunger following high-carb/low-fat meals in the past, after overfeeding, I’ve found that by far the most satiating food is a high-carb/low-fat meal. I first noticed this when I ate a big waffle with fruit and syrup and didn’t realize it was past lunch time until 7 hours had elapsed. A similar meal would have left me starving by 10am in my exercise more/eat less era, but I found that the rules of the game change when you are supplying adequate calories to meet your daily requirements.

This was all put into better perspective when I recently read a book I never thought I’d get around to reading ? Doug Graham’s 80-10-10 Diet.  (Note: Much of this book is dumb, and prolonged fruitarianism is dangerous – leading to imbalances for many, and a striking inability to properly digest and metabolize a mixed diet for others).

What I was surprised to hear from Graham, was his thorough understanding of the negatives of eating lots of fat (as well as purine-rich meat) and lots of fruit together ? even from wholesome sources. Granted, most of the wholesome sources were omega 6-heavy fat sources like nuts and avocado, which I’ve noticed to be a far worse combo with fruit than primarily saturated fat (like cream or coconut), but he understood this ?bad combination? quite thoroughly, and had a virtual army of testimonials from people who thought fruit was the enemy, but later found out that the fat was causing their negative fruit experiences.

Even more impressive was Graham’s claim that the biggest cause for failure on his extremely high-carbohydrate, low-fat, low-protein diet was UNDEREATING. In fact, one of the main focuses of the book was making sure you calculated your caloric needs and were, at the very least, meeting those needs with ample food intake. Those who seem to be the most successful on his program, are indeed those who focus on adequate caloric intake ? such as this veggie vixen (shown above) who reports eating 4,100 calories on her rest day (the camera-man in this video is an endurance athlete who reports eating up to 7,000+ calories per day on Graham’s 80-10-10 protocol).  Fruit hasn’t exactly put her on her death bed yet.

Anyway, to give some full disclosure, I’m eating the hell out of some fruit to see what kind of performance improvement I can get from it, and to see if, on a lower-fat, high-calorie diet combined with exercise like that being used with great success by 180 followers JT and Riles, my former negatives from fruit consumption can be eliminated. Although starch would be a preferred fuel in some respects ? as a larger percentage of starch breaks down to glucose, whereas much of fruit sugar is converted to fat in the liver ? it’s simply impossible to force down lots of starch without taking in a load of fat with it. Fruit, however, is quite delicious all by itself, and I had no problem taking in 300 grams of carbohydrates for breakfast this morning. This can definitely be felt on the trail!

My Conclusions on Low-fat, high-carbohydrate diets?

Most people try to eat a low-fat diet and cut calories at the same time. This is the worst possible diet known to man. In general, the higher your diet is weighted towards carbohydrates, the greater the muscle mass you will lose while in calorie deficit ? and the greatest out-of-control hunger and cravings you will experience. Never attempt to use a very high-carbohydrate, low-calorie diet for weight loss. You’ll be sorry if you do.

When comparing fat vs. fruit for athletic performance, you’d be a friggin? idiot to think that fat is a preferable fuel source when compared with carbohydrate ? from fruit, starch, or whatever. Fat is pretty good for very long duration, easygoing exercise. Fruit gives much better performance results, assuming you are eating sufficient quantities of it.

The biggest problem with low-fat diets is muscle wasting and protein losses. However, with a eucaloric or hypercaloric diet, a low-fat diet is not catabolic at all, does not make you uncontrollably hungry, does not generally lend itself to emotional instability, does not cause muscle loss, and does not do anything but make you feel really good ? especially while exercising. In fact, calories are more muscle-sparing than protein. The higher in calories you go, the less protein you need to maintain lean body mass. Graham asserts that with a diet containing ample calories, there is no such thing as protein deficiency. I agree wholeheartedly (unless you are eating only one food that doesn’t contain all essential amino acids, but no one does this). Consider the following?

Ancel Keys cited work that pointed out that nitrogen balance could be maintained on as little as 30 grams of protein per day for an adult male on a high-calorie diet. T.L. Cleave witnessed rural Zulu’s on diets with only about 5% of their calories coming from protein who were in great health. Human milk is very low in protein compared to that of other mammals, suggesting lower protein requirements. Plus, this is the most anabolic time during a human being’s life ? and this rapid anabolism occurs on a diet containing 6% of calories as protein.

Other primates average less than 10% of their caloric intake as protein, and generally have a 500% greater ratio of strength to bodyweight than humans. No matter how you examine it, we are an awful lot like other primates.

Anyway, that’s enough rambling for today. But I know many of you have tremendous cognitive dissonance when it comes to fruit restriction. After all, this is the staple food of our closest animal relatives (who are not vegan 365 days per year ? and you shouldn’t be either), and one of the only foods on earth that humans can chew, digest, and assimilate without cooking it. So hey, try some if you dare, but note ? other primates that live on fruit do NOT eat a lot of meat and fat with it. Something to think about. Let you know how my fruity escapade turns out, as I continue to eat at least one “fruit meal” per day.