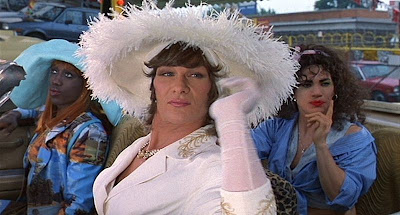 I’ve been fascinated with female masculinization, particularly facial hair growth or what is called hirsutism, ever since I heard about Diana Schwarzbein’s bout with a syndrome known as Stein Leventhal (Polycystic Ovarian Syndrome or PCOS basically). Okay, it started back before that, when Rebecca Romijn was the bearded lady in the movie Dirty Work, but that’s unrelated.

Recently this issue has been popping up again and again. For starters, last spring I had a female roommate who:

Of course, this person was a misguided health fanatic that hadn’t always had these problems. Although I purposefully didn’t get into it with her knowing that there wasn’t the slightest chance I could transmit real knowledge into her gluten-free, dairy-free, vegetarian, low-calorie, alcoholic brain (I once heard her say that having a tooth abscess during a bout of the Master Cleanse was a sign of just how detoxifying the cleanse was, and that she was thinking of trying it again!), there is no doubt that she could have improved if not completely overcome her issue in a month by eating the food (ETF). It would have worked something like this:

3) This decreases the amount of luteinizing hormone (LH) produced ? (LH triggers the production of androgens ? male hormones) while increasing free circulating progesterone which triggers a greater production of follicle stimulating hormone (FSH) ? which in turn triggers ovulation and menstruation down the road

Voila ? less androgen production, menstruation restored, and let’s hope it would increase some blood circulation to her brain as well.

This scenario was very similar to what you might see with someone with an eating disorder. Although some of the excess hair growth with anorexia is more like a peach fuzz, male-pattern hair on the chest and face as well as male-pattern baldness is very common.

But as any 180 junkie knows, there are many parallels between a person who is actually starving and a person who is overweight ? and the key underlying commonality is a low metabolism/hypothyroidism.

So in those with insulin resistance with excess body fat you see the same kind of patterns emerging. Correspondence with a woman named?Carla (not her real name)?on Facebook recently may be of interest to you?

Carla?noted that prior to her pregnancy she was always a warm 98.6 degree F kind of gal. Then she had a kid and suddenly noticed that her body temperature had plummeted to 97.2. Coinciding with this was of course, post-pregnancy weight gain of, I think she said 30-40 pounds without noticing much of a change in her normal diet and lifestyle patterns, and the development of thick, black facial hair. This is pretty classic PCOS/Stein-Leventhal kind of pathology. What fascinated me and is something that is NOT part of the known mainstream medical diagnostic portrait (anything of relevance rarely is) is that she noticed a coinciding drop in body temperature going along with all of this.

I can only assume that her body exhausted its capacity to produce progesterone during pregnancy, and when that faucet shut off she was left with a lot of metabolically-suppressive, androgen-stimulating, unopposed estrogen. But there are many other theories one could dream up, including perhaps her body’s unloading of her metabolically-stimulating short and medium chain saturated fats into breast milk while leaving nothing but linoleic acid (omega 6) in her body to stimulate estrogen.

This happens to a lot of women. Many women gain weight or can’t lose it after pregnancy, as well as enter into a mental state indicative of progesterone shortage (not totally unlike that experienced during PMS ? presumably caused at least in part by insufficient progesterone levels at a time when they should be high). Anyway, she should get some relief if she can get her body temperature up. Not sure if she will pursue it or not. An excess of calories from coconut and dairy fat as well as carbohydrates would definitely help though.

Then we have ol? Sheila.?Sheila is a natural big testosterone producer for a woman, which led her to being coerced into female bodybuilding due to her hormonal profile for it. Bodybuilding led her to becoming very muscular, very lean, very cold, and very infertile. While she’s not out of the woods yet, she has at least brought her temperature up somewhat, had her period return after a very long vacation, and noticed an improvement in her overly-masculine voice and muscularity (if I’m not mistaken, I’m pretty sure she said that or something like it).

Last but not least for your interest, and to better help us all understand the hormonal and metabolic peculiarities of female masculinity, is a woman that I met recently. She contacted me after bringing her body temperature up 3.0 degrees F in 30 days following my overfeeding program. Prior to this she was a low-carb oriented Weston A. Price Foundation devotee and has been for years. She told me she has always been on the masculine side with excessive facial and chest hair.

And, not surprisingly, she has had her hormone levels tested and testosterone is off the charts, estrogen is moderate to high, and progesterone is about as low as can be. As a general rule I think it’s safe to say that testosterone is the default hormone for women to produce (they do so in the adrenal glands) when progesterone cannot be manufactured properly (due to stress, low metabolism typically). This high ratio of estrogen to progesterone by the way is very typical of a woman with breast cancer, and well, she’s definitely got breast cancer (bringing her body temperature up via RRARF didn’t help in the limited time she was able to try it by the way ? and probably isn’t the best approach in late stage cancer despite its theoretical ability to increase cancer-obliterating cellular respiration).

Anyway, this female masculinity and PCOS stuff is interesting. If you are a woman and lean ? having done a bunch of restricted diets, battled with eating disorders, engaged in hardcore competitive athletics ? particularly endurance exercise, and stopped having your period and had some other complications develop? eat and eat some more.

On the topic of PCOS, which is more commonly something overweight women experience, beware of the approaches that just flat out tell you that PCOS is from ?insulin resistance? and that you should cut out all carbohydrates. While this may seem like a miracle cure at first as you medicate your impaired glucose metabolism and temporarily bring your insulin levels down within normal ranges, eventually you will have to face the root cause of your impaired glucose metabolism instead of just avoiding it. Carbohydrate restriction, because it increases your exposure to stress hormones and ‘tends to shut down thyroid function? as Dr. Atkins put it, usually takes you to a dead end in a few years or less ? with a myriad of new health problems like mood disorders, constipation, adrenal fatigue, mineral imbalances, and who knows what else.

The root cause, like most things, is probably a quintuple combination of excessive polyunsaturated fat accumulation in your tissues (which is estrogenic), excessive consumption of xenoestogens (toxic chemical pollutants) and phytoestrogens ? soy being the worst offender, oral contraceptive use, excessive stress and inflammation, and repeated attempts at weight loss through any of the popular approaches ranging from doing lots of ?cardio? to calorie restriction.

In other words, as usual, many of these health problems are caused by a ?healthy low-calorie vegetarian diet with lots of healthy fats and healthy soy products and a healthy exercise program and healthy lifestyle? as we commonly define them in the 21st century. Eating and living in 180-Degree opposition to that should help tremendously. If all else fails, try natural, non-synthetic thyroid and progesterone supplementation.

If that fails too, join the circus. If you are anything like me, you’ll find hanging out with midgets a lot more fun than trying to eat a very low carbohydrate diet. And, you may find romance with an incredibly sexy, well-dressed man ? just don’t be surprised when his fianc? shows up and throws egg salad sandwiches at you.