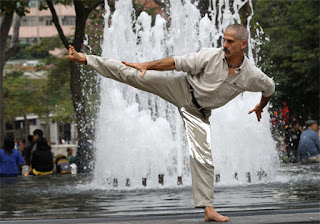 Not long ago I received three books in the mail from 180 follower Rob A. Rob and I have communicated closely for going on a couple of years now I think, and the arrival of these books ? all of them written by exercise scholar Frank Forencich, was timely.

Every time summer rolls around I get the itch to spend a lot of time outdoors doing active things. My earliest dabblings with health came in my early 20’s when I realized that the more time I spent outside, the more my most pressing health problems at the time (mood swings, back pain, asthma, allergies) subsided. In fact, if I spent 24 hours per day in the outdoors backpacking around ? on my feet most of the day and sleeping in the outdoors, those problems not only improved but completely disappeared until I returned to indoor living (and no, this is not confirmation per se that I was allergic to something in my home as I lived in nearly a dozen locations and noticed this effect every single time).

This is perfectly congruent with the beliefs of the early physiculturalists and the traditional naturopathic ideal ? that clean air, clean water, proper rest, sound sleep, lots of sunshine, a peaceful, quiet environment, good food, and physical movement are the tools the body needs to recuperate from sickness. And when these are supplied in abundance, there are but a few maladies that the body cannot conquer.

While this is obviously overly idealistic, I do know that many with serious and minor health problems alike, if it were feasible to really ?go native? like this, would truly witness superior results to that offered by the best that alternative and mainstream medicine offer combined.

I guess you probably have to truly experience what it feels like physically, mentally, and emotionally to truly untether yourself from electronics, the comfort of a bed, noise, news, and stale indoor air to really appreciate how powerful it can be. If you haven’t, you kinda have to take my word for it I guess. But there’s no doubt that my long-time romanticism of primitive and simple living is a contributor to the big stiffy I’ve always gotten over the diets and lifestyle of isolated peoples. I was like Rob Schneider’s character ?orgasm guy? with every page I turned in Weston A. Price’s Nutrition and Physical Degeneration many years ago.

Anyway, I get from Frank Forencich’s books, that he feels much the same way. Frank is not into big muscles and cover model standards. He’s not into crash diets, treadmill cardio, and the latest list of ?weird tips to blast belly fat. Rather, he is into the enjoyment of play, the regenerative health benefits of exposing your physical body to new challenges, and the excitement of exercise as a form of adventure. Exercise is both a part of and a vehicle to living life at your greatest potential. 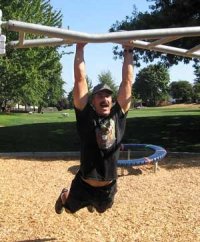 His books lack the kind of specific direction, hard-hitting medical claims, clear linear logic, and overhyped promises of results with pages of before and after testimonials like you see everywhere else in the fitness industry ? which is precisely what makes them good reads. Instead, you come away with a feeling ? a feeling that perhaps the entire way we view movement in the modern world and connect with our bodies is diseased. Even that the concept of reward and goals, when it comes to exercise or any health pursuit, is a part of the problem and not the solution ? reinforcing that nothing is worth doing for the sheer inherent joy of doing it anymore, but is always just a means to an end.

And this concept, I get. In fact, my favorite forms of physical movement are precisely the things that I have done over the years that completely removed the element of competition or goal. I did them purely because they were enjoyable. Those things are hiking/backpacking, beach paddleball, snorkeling, and most recently Frisbee.

With hiking I used to just love being out there. At first I tried turning it into a competition where I tried to track mileage and make it to ?x? number of mountain peaks or lakes. But I ended up ditching this mindset thankfully ? for the first time I think since playing Wiffle Ball with my childhood buddies. In fact, when I realized just how powerful of a mindset change this was I really began to resent those that ventured into the Wilderness to accomplish a goal.

In Colorado, it is becoming increasingly trendy to climb all of the peaks in the state over 14,000 feet in elevation. These mountains are called the ?Fourteeners. I grew to really resent the people that came from all over the state (and the country), just to drop into one of my favorite local trails and ignore everything there while focusing myopically on ?bagging? the peak. I came to refer to them as ?Peak baggers,? a phrase I uttered as if they had said something bad about my mama.

If you think that sounds snooty, you should see the sacredness with which I hold what are perhaps the only games I’ve ever played without keeping score ? paddleball and Frisbee. While paddleball may seem like a lame game, I can honestly say that the most enjoyable and childlike moments of my life came while playing beach paddleball ? a game where you just hit a ball back and forth with another person or persons for the sheer enjoyment of it. And when I played with my stepmom and she drew up a court in the sand to keep score so that the game had some sort of ?point? to it, I fantasized about ripping her head off with her spine coming with it, grabbed the ball, spiked it at her feet within the boundaries she had created, and said ?1? to signify how not fun this game was going to be while keeping score. She walked away. It was one of the most dick things I’ve ever done. Nobody f%$#’s with my paddeball!

Anyway, Frank’s books aren’t necessarily?life-changing. Your life probably doesn’t depend on rushing over to his site http://www.exuberantanimal.com/ to order?his books immediately?and absorb some incredible new information. To me his books were a reminder, a powerful one at that, of why I spend so much time with all this health crap. I do it because I freakin? love it. I like how I feel when I eat mostly wholesome, carb-o-rific foods. I totally get off on simple physical pleasures like paddleball. Being outdoors in the sunshine and detached from comfort and climate-controlled environments is one of the most invigorating things I know. Learning about how the human body works, mine especially, and expressing my thoughts about it is totally mentally fulfilling to me. 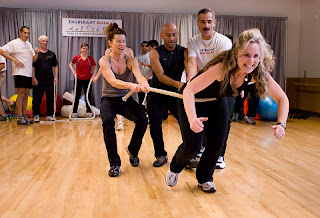 So let it be a reminder to you too I guess. Health and physical movement are not something you need to justify based on results. They can be inherently enjoyable and enriching pursuits in and of themselves. It doesn’t matter whether you lose fat or build muscle from your health pursuits or whatever. Eating food that makes you feel good today isn’t a waste of time if you don’t live to 110 totally free of all illness and every ounce of body fat. Whatever nurtures you and makes you feel good mentally, physically, and emotionally is worth doing for the sheer enjoyment of it ? no matter what that is, including giving the finger to health food so that you can relax and enjoy the company of friends and family without stressing over what type of oil was used in the preparation of that food. We all have our own unique paths to health. Find it. And go play if you can, your life might just “depend on it” according to Frank’s first title.

My notes from Frank’s books? He is obviously a very sharp guy?

PLAY AS IF YOUR LIFE DEPENDS ON IT?

?The tissues of our musculoskeletal system ? our muscles, tendons, ligaments and bones – cannot thrive in a state of suspended animation: They depend on gravitational, resistive and kinetic loads to maintain their integrity and health. When muscle tissue is challenged, it responds with growth and increased neural drive; it learns to generate stronger contractions. When connective tissue fibers are challenged with repeated contractions, they supercompensate by growing thicker at crucial junctions. When bones are loaded repeatedly, they increase their mineral density along the axes of greatest force. In this, stress is not the enemy at all; in fact, it is the primary somatic teacher that tells us where to grow, what to reinforce and how to heal.

?The April 2000 issue of Sports Medicine Digest suggested that, in terms of longevity, ?it’s better to be fit than thin. Citing findings from the cooper Center for Aerobics Research, they reported that, in terms of general health as measured in death rates, being fit is far more important than being thin. For out-of-shape men, obesity was clearly associated with higher death rates, but among those who were in shape, body fat percentage was unrelated to mortality. In fact, men who are fit and fat have a death rate about one half that of unfit men in the normal weight range.

?? as our understanding of exercise becomes more sophisticated, we begin to see that it’s not pain that stimulates our bodies, but challenge. Now we say, ?no challenge, no adaptation. In other words, if you don’t push your comfort zone a little, your body isn’t going to pay attention. It’s not the pain that makes the difference, it’s the push.

?When administered in an intelligent, oscillating pattern, we would be correct to describe exercise as ‘therapeutic trauma.?

?? just forget about numbers. Counting takes you out of your body. Instead, concentrate on the quality of your movement and pay attention to how your body feels as you become fatigued.

?We expect people to lay down their ideas in linear patterns with distinct rankings, hierarchy and above all, order. But, as we are beginning to discover, neither evolution nor good ideas work this way. Good ideas don’t proceed from point to point in sequential fashion; they split and splinter, branch and divide, just like species do. Simple ideas may sprout a few branches, but really good ideas become exceptionally bushy, generating thousands of conceptual sprouts that continue to grow as the discipline becomes ever richer.

?Every responsible physician, trainer and coach knows that speed fails. The only thing that really, truly works is frequent, vigorous movement combined with a sensible, food-based diet, sustained over years and decades.

?Back at the dawn of the digital age, ?visionaries? claimed that the computer would be a highly effective labor-saving device that would free us from untold hours of drudgery. No longer would we be shackled to our desks, writing down numbers and words by hand until the middle of the night. We?d be granted a wide-open vista of easy living, free to pursue our favorite leisures, hobbies and fascinations. Boy, were they off the mark.

?? we now know that there’s one sure way to position yourself for a chronically activated stress response and that’s to adopt and hold tight to a single, static world view. The formula is simple: Develop a perspective on how the world works and stick to it. Then, when reality comes barging in with the inevitable counter-argument, you’re in for a case of cortisol poisoning and everything that goes with it, including damage to precious blood vessels and neurons.