How Fast Should You Lose Weight? If you are reading this, then consider yourself lucky. I’m about to solve all of the world’s problems with this simple article. World peace. A cure for AIDS. Global warming. Tupac’s whereabouts. Where Bin Laden got his growth hormone injections. It’s all here.

Well okay, maybe not. But I do find that sometimes the very simple things that I take for granted often have the strongest impact on 180D readers. Today, we go with the simple of the simple. How fast should you lose weight?

My mom and I have been talking about this recently. I’m visiting her for several weeks in Nashville and it’s been on my mind, as my mom is a 96.3-degree 40-year dieter wanting to lose weight (and she gets that look of hopelessness when I tell her how long it will take to get a substantial amount of fat off of her body). Hence me writing about it. My mom repeated the standard mantra that most people hear ? that ?healthy? weight loss is about 2 pounds a week.

I actually like math, and we’ll use some math to scrutinize this?

A pound of fat is a storage depot of approximately 3,500 calories. So, to lose 2 pounds of fat in a week, you would need to have an energy deficit of 7,000 calories ? which is 1,000 calories per day!!! Yikes! I virtually can guarantee that if you are running at a 1,000 calorie-per-day deficit you are going to be in for some real trouble, and a fierce activation of your famine response ? not to mention running into some severe hunger and cravings. You might get away with this for a few weeks but there will be hell to pay unless you are an extreme rarity.

To run a calorie deficit that large, you are going to have to pursue the time-tested failed strategy of ?intentional? weight loss. It’s certainly not going to be something that your body regulates and achieves spontaneously without physiological revolt or noticeable discomfort ? something that I argue is the only way to lose weight sustainably and permanently.

To lose weight eating to appetite and doing reasonable quantities of physical activity, you are not going to run a deficit of more than a few hundred calories per day without noticing. Let’s say an absolute maximum of 500 calories per day. At a deficit like this, you are only losing a maximum of 1 pound per week of actual body fat.

Let’s not forget though that a quart/liter of water weighs a buttload (a frequently-referenced unit of measurement used here ? get to know it). A change in water levels in the body by 4-5 pounds can happen in a matter of hours. In high school wrestling we would often shed 10 pounds of weight overnight by sweating like crazy and not eating or drinking anything. Mmmm, healthy.

Let’s also not forget that a pound of muscle only contains 600 calories, so a deficit of 600 calories is plenty to make you lose a pound ? but you are losing muscle, not fat. This is hypothetical of course. The relative amounts of fat and muscle that you lose in any energy deficit depends highly on your age, gender, metabolic rate, type and quantity of physical activity, and more.

I think what is most common is that people induce a daily calorie deficit of 1,000 calories per day or so through diet, exercise, or a combination of the two. During the first week when metabolic rate is its highest, they lose the most total weight and the highest ratio of fat to muscle tissue. They lose 2-3 pounds and most of that is fat. As the weeks continue and metabolic rate starts to come to a screeching halt they being losing less fat, a little more muscle by percentages, and less overall weight. Eventually they lose no weight at all or even gain weight from increased water retention (water retention increases as metabolic rate falls).

So speaking strictly about fat loss, not ?weight loss,? the absolute maximum rate of sustainable fat loss one can achieve without doing more than a few hours of exercise per week is only about one pound weekly. Of course, there have been many times in my life where I lost a pound of fat per day doing rigorous backpacking ? sometimes over 20 miles per day carrying 50 pounds on my back. But that is quite a different scenario, and came with quick weight rebound and an overall worse body composition in my collective experiences with it.

This rate of fat loss is so slow that, if you are monitoring your weight on a scale, you are almost guaranteed to feel like it is taking too long. You will also be thrown off by subtle changes in water levels and muscle mass ? perhaps thinking that you are not losing fat when indeed you are, or vice versa. In fact, it’s not uncommon at all for a male or female with a long dieting history to gain tremendous amounts of fat-free body mass while gaining no fat at all or even losing fat. 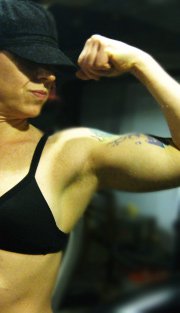 This is often welcomed by men, whose steroid-enhanced superstar physique idols weigh far more than an average male, but horrifying for women who may not understand that some of the world’s leanest women are, like very lean men ? quite heavy for their height due to increased muscle mass. Take for instance Batty (left), who is a very lean and athletic real woman at 175 pounds who issues a formidable challenge to the currently idolized and out-of-reach-to-normal-women body image in her excellent WOMEN?S BODY IMAGE POST.

But know that men and women alike often gain weight while getting leaner as I did years ago with my first experiments with ?ETF-ing? (eating the food). Most will find that their ?ideal body weight,? from a health and metabolism perspective, is considerably higher than they’ve led themselves to believe. The good news I guess is that you may need to lose far less weight than you think to achieve your supposed ideal body composition.

So yeah, no major earth-shattering revelations here, but know that if you have more than 20 pounds of excess and unwanted fat on your body, plan on taking somewhere between 6-12 months or longer to get it off, with an absolute maximum rate of fat loss at about 50 pounds per year, if you hope to keep it off and not have your health and metabolism negatively impacted in the process. Throw away your scale. Scale weight is more or less irrelevant and the scale itself, if you weigh yourself more than once per month or so, can play some serious head games with you ? such as getting irrationally emotional when you gain a pound one week, and drastically switching courses into the anorexic strategy for trimming off excess baggage.

All this equates to not realizing that you are dieting or losing weight because you experience no nagging hunger, no cravings, no freezing cold hands and feet and loss of sex drive, or any other negative symptoms. If you do, or if you catch yourself losing weight faster than 5 pounds per month, you need to eat more ? perhaps even intentionally regain a?couple pounds briefly before making even the slightest attempt at marching further, which is a strategy that has more or less become universal in the bodybuilding/fitness competitor world (and is gaining credibility amongst real obesity researchers as well, such as Amanda Sainsbury-Salis who I hope to write about soon).

With a process so comfortable and unnoticeable, it’s no different from living your normal life. You just happen to be losing fat as you do it at a pace that’s almost undetectable to anyone who sees you on a daily basis. Sure, dieting with hunger and lightheadedness and irritability and unwanted exercise is not something that you want to take a whole year. I can’t even make it for three weeks doing that. But when it’s unnoticeable, comfortable, and enjoyable ? who cares how long it takes?

And as a last tidbit on the topic of the best rate of fat loss ? as you approach a level that is very lean ? lean enough to see your abdominal muscles for example, your ability to lose body fat without losing lean tissue and suffer adverse metabolic consequences becomes greatly diminished. Leanness gurus like Martin Berkhan and Clarence Bass both agree that the maximum rate of fat loss is no more than 2 pounds per month, and ideally even less than that, when trying to go from normal to freakishly lean. Something to keep in mind at least ? that is, the less fat you carry the slower you need to lose it.

But in general, the harder you ‘try? to lose weight, the greater the magnitude of your failure to keep any fat that you lose off of your body. Sure, you can get some exercise, eat lots of low-calorie foods like fruits and vegetables, avoid intentionally overeating or eating when you are not hungry? but push too hard and you will experience an equal and opposite reaction from your body as a best case scenario.

More of this type of stuff to come over the summer, when losing fat is its easiest and most welcomed by your body.