How to Feed Your Kids 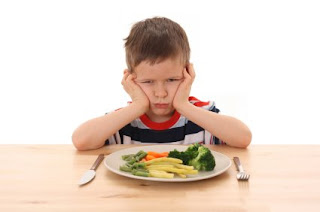 ?Duke University psychologist Philip Costanzo, Ph.D., found that excess weight in school-age children was highly associated with the degree to which parents tried to restrain their children’s eating. Even well-meaning parents interfere with intuitive eating. When a parent tries to overrule a child’s natural eating cues, the problem gets worse, not better.

?Research indicates that parents who restrict access to certain foods are actually more likely to have heavier kids! This fact makes sense: The kids lose their ability to self-regulate as a result of parents? interference.


Promising a child dessert if she eats her vegetables or encouraging a child to clean his plate can also contribute to developing unhealthy eating practices.

-Linda Bacon; Health at Every Size

My goal in this post, first and foremost, is to NOT turn it into a full-length novel. This is in no way meant to be a complete guide to approach the food issues with your kids. Obviously there are specific circumstances that call for restrictions, special diets, and other sucky things. Many of you already have kids with well-worn eating habits and a well-established dynamic between parent and child surrounding the food issue. This is more like a generalized overview on what I think are some common mistakes that good-intentioned parents are making, and where I believe the war against the modern junk food environment is won and lost.

For starters, parenting is extremely complex. Nearly all parents have good intentions going into the deal, but all find that there are many unintended consequences of their parenting techniques. Whatever parenting style you have is going to end up with both positive and negative consequences. It’s inescapable. And this obsession with being perfect parents and creating perfect kids is just as farcical as the belief in some magical perfect diet. My new saying, ‘the perfect diet is very unhealthy? applies to this whole general mindset surrounding perfection.

Okay, with that in mind it’s food time. What’s the best way to feed your kids?

Food is Not a Reward

First of all, you want your kid to be tuned in to his or her natural feedback mechanisms as much as possible ? with a minimum of psychological interference. The most common mistake I see parents making is offering up something sweet as a reward for eating food that is nutritious. The outcome is that the kid associates ice cream, cake, cookies, and other sweet treats with ?reward? and associates nutritious food with ?work? and ?drudgery. The kid might love nutritious food if given the chance to believe that eating it is enjoyable. The kid might also not seek the pleasure of a treat if ice cream wasn’t given that status. But this sets up a lifelong heightened association with junk food as a reward for good behavior, and the concept of eating these foods and other ?bad? things (like alcohol) as a form of entertainment becomes entrenched. This brings up our next topic?

Food is Not Entertainment

?Hey kids, who wants to go out for?. PIZZA!!! This is ridiculous. If you want your kids to think homemade food is boring and drab and constantly be wanting to go to the nearest kid version of a crackhouse, then get really excited about going out. Neutrality surrounding all things food is the key. If you want to entertain your kids or get a rise out of them, light a fart or something. Buy a reinforced Whoopie Cushion (mine always burst like the 4th time) if that’s too much for you. In today’s world, going out to eat has easily become the #1 form of entertainment and recreation. Food is for nourishing your body and fueling it to do what actually should be your recreational activities ? which should be distanced from food within reason during your kids? developmental years. Going out to eat, cake, etc. must not ‘special occasions? but ?unspecial? occasions.

As top 180 Kitchen fan Jenny can tell you, when you learn how to make food taste good, your kids will want to eat it, be generally disappointed in restaurant food, and cease to be slaves to Pop Tarts, root beer, and Pringles. Instead of forcing them to eat nutritious food, you’ll have to fight them for it when you get it right. They won’t sit there and play with it to antagonize you while whining for ice cream every 38 seconds. They won’t want Lucky Charms for every meal.

This is often as simple as cooking with the use of starch and fat in the right proportions ? approximating the macronutrient breakdown of pizza, cheeseburgers and fries, fried nugget product, and mac n? cheese. You are trying to compete with such foods in your home cooking, and you won’t achieve that with broccoli and steamed fish. And as many have discovered, the difference between a superbly healthy diet and a typical Western Diet is often the simple switch from the shortening and vegetable oils of modern food to coconut oil, butter, and animal fat. Such minor adjustments, collectively, would have a massive impact.

The more involved the kids are in the preparation of eating, the shopping for the food, etc. the better. I could definitely see a family ritualistically making dinner together as a team. This could be very fun, telling the kids to pick out the music (with a no-Bieber rule on hot dog night of course) or do role playing with little waitress outfits, making menus on the computer, or whatever else you can think of to get everyone involved. If it is not a routine, it will be work and a major drag to put down the video game controller to come make dinner. But if it is routine and the kids are actively learning and growing with their knowledge of food and cooking they are more likely to become well-connected to it. Of course, you have to really assess this for yourself. You don’t want it to become a chore or this concept will totally backfire.

This is unfortunately not a war many will win, and this is potentially more important for overall physical, social, and psychological well-being than any other modern thing we face. Not only are there endless images showing kids having a kick ass time eating junk food, but there is an avalanche of messages designed to make us feel bad about our bodies, endless messages showing kids that dieting is cool, fun, morally just (vegetarian), and improves life, and more including the general idea that animal fat is going to kill you. Statistics show stronger correlations between hours of tv watched and childhood obesity than any other lifestyle factor ? and most dietary factors as well.

I wrote up a whole soapbox schpiel about television but just deleted it all. It’s useless. In the end we all need to a get a life, and tv makes us lose interest in getting a life, so it’s a trap (studies show a ?loss of volition?). Good luck with that one. If it’s of any inspiration to you, I haven’t had cable tv in my home since I was a teenager and have lived to tell about it. In fact, I owe much of my critical thinking skills and fulfilling life to this.

Putting your kid on a low-carb, low-fat, or calorie-restricted diet is the dumbest thing ever. I don’t know any severely obese individuals, or people with eating disorders that didn’t start dieting in some shape, form, or fashion at a young age. Restricted and restrained eating, especially for a young person, is very dangerous. Many kids, like myself, lose excess fat upon hitting puberty anyway ? just in time because my retarded family doctor had just given me the ?cut out snacks? speech for being in the very high percentiles of weight for an 11-year old. Trying to impose a diet on a young kid is like giving a 13-year old breast implants because she’s not developing quite as quickly as her friends. If you want your kids to have emotional issues with their bodies, practice the famous starve and binge approach to healthy eating, and develop life-threatening conditions from it long-term, then, by all means, put them on a diet immediately.

When a strange new food gets pushed towards a young kid, that food gets pushed right back at ya. I would suggest cooking a wide variety of foods in the home from the time the kid is very young and let them develop their own curiosity about those foods at their own pace. Remember, they know better than you do what is good for them. I mean seriously, how many times have we, as adults, been totally wrong about ‘the healthy way to eat?? It’s best to do what you can to help the intelligence of their bodies come forward without any interference, including keeping chemically-enhanced and highly-refined and sweetened foods out of their diet until they have developed a wide variety of preferences for various real foods (like, say, until age 4).

Give Them Real Food

It’s always great to have a nice spread laid out for kids consisting of real food that tastes good. By real food I mean things that don’t contain white flour, white sugar, corn syrup, chemical flavor enhancers, or otherwise refined or packaged foods. A parent’s prime food duty is to have healthy food available to eat, with very little, if any, junk available to eat in the home. Junk foods pervert natural taste and reward centers, making wholesome food bland and uninteresting. The most important thing, as mentioned above, is that if you are going to be a food Nazi, do so for the first 3-4 years of the kid’s life before they become exposed to the outside food world. This builds a great template for good health and a more likely preference for real food.

Eat lots of wholesome food without macronutrient or calorie restriction yourself, and breastfeed your kids. Obviously the longer the better, but we all have lives to live. Infant formula is pure death as far as I’m concerned (speaking from experience) unless your own nutrition is so poor that you just can’t produce good milk (but I’ve only heard tales of this happening on a vegan or low-calorie diet).

Okay, that’s enough. We could obviously wear this thing out. Just remember ?wide selection of real food? and ?neutrality. You want to do everything in your power to limit the psychological interference between your kids? bodies and plates. This is because we are living in a very unique food environment. And ultimately, you want to prepare them for that food environment so that they can be balanced in their interaction with it, not seek pleasure from food when the most chemically-deigned to be pleasureful foods the world has ever known are sold on every corner, and not be farm-bound in overalls with a bad case of modernophobia either.

You want to serve up great homemade food that becomes favorites over the competition. You don’t want to reinforce the idea that there are forbidden foods to be strictly avoided and make food the place where they express feelings of rebellion. And finally, you want to encourage them that it’s okay to eat to fullness, that their hunger is not an enemy to be suppressed, and help them to embrace and love their natural physical appearance as much as you can. Easier said than done, but this should be light years ahead of the mind-numbing, ?How can you have any pudding if you don’t eat yer meat?? Pediasure, or ?watch your portions? approaches to feeding the 21st century younglings.

Obviously there are some lessons in here for us big kids as well. My niece has a simple message she wanted to share with you guys… 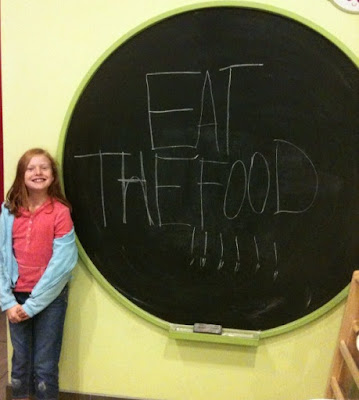