How to Reduce Omega 6 Tissue Concentration

Recently I posted a letter written by nutrition researcher David Brown to his local newspaper. The topic was reducing the total quantity of omega 6 polyunsaturated fat in the diet to reduce tissue and blood concentration of this type of fatty acid ? which has a lot of negative associations, such as triggering excess inflammation and other key properties.

Although I think as long as vegetable oil is out of the diet almost 100%, this is not something to really get your panties in a wad about. But there is certainly some indication that our tissue concentration of omega 6 is so high that it might be worth the effort to be extremely diligent about avoiding omega 6 from all sources to undo this imbalance.

To do that most effectively, which is probably even more important on a high-fat diet as we take in a large quantity of all fats ? and therefore deserve to give the issue heightened vigilance, is to construct the diet based primarily on the following foods:

Red meat comes from ruminant animals like cows and lamb. Ruminant animals convert omega-6-rich corn and grain (and of course grass) mostly to monounsaturated and saturated fat. Unlike pigs, poultry, and humans, no matter how much polyunsaturated fat they receive in their diet, their body fat will never be comprised of more than 4% polyunsaturated fat (from what I understand). Grassfed or not, red meat simply isn’t a rich source of omega 6 in either case compared to other foods. As far as meats go, it’s the runaway top choice.

Pork is considerably higher in PUFA, but not nearly as high in PUFA as poultry of any kind. If you do eat poultry, it’s probably wiser, if you are attempting to decrease your tissue concentration of omega 6 (this can be tested nowadays too, probably a very important tool that we’ll get into using in the future of 180), to eat your poultry without the skin. This will also keep you from eating too much poultry, cuz poultry without the skin kinda sucks :)

All nuts, seeds, and nut and seed oils should be avoided completely, including peanuts (especially so), except for one exception ? Macadamia nuts. Once again, I’m not trying to create a paranoia. I eat a cup or so of nuts every week, plenty of pork, and I put peanuts in my Massaman curry. I’m just reporting on what is highest in omega 6 if you decide to see-for-yourself what power lies in reducing your tissue concentration of omega 6.

I don’t know about you, but I find it to be damn good news that Macadamia nuts are lowest in omega 6. Talk about the king of all nuts. Why bother eating any other kind of nut anyway? I would recommend getting very fresh macadamias, such as that sold by Pangaia, if you really want to mow down lots of these badboys. Of course, make sure you’re macadamias are not roasted in vegetable oil, as they commonly are. 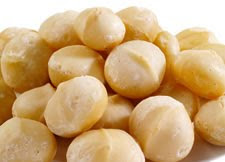 Corn and wheat tend to have the highest levels of omega 6 of the starchy foods, but the amount of overall fat is fairly insignificant compared to what you get from vegetable oil, nuts, seeds, pork, and poultry.  Do ya sweat it? I don’t think so. Keep eating your spoonbread girls.

On the omega-3 side of things, it’s doubtful, with omega 6 restriction, that you’d need to take any kind of omega 3 supplement.  If you do take one, it seems most prudent to me to take a large dose for about a month (5 grams) and then taper off or eliminate the supplement altogether.  I do recommend eating a portion or two of wild-caught salmon every week for both the tiny amount of omega 3 that we need, as well as pre-formed Vitamin D, B-12, and selenium. Wild-caught salmon is one of the richest sources of all of those key nutrients.

As far as cooking fat is concerned, the ONLY low omega-6 options are:

The “oil change” is the most significant change you can make in terms of limiting and replacing omega 6.

Oh yeah, and if you absolutely must have mayo, make your own from extra light olive oil, but don’t eat too much of it.  A better option, as was discussed in the comments section of David Brown’s Omega 6 post, was to make a spread out of sour cream to subsitute for mayo. That’s a much better solution if ya axe me.

The top 10 best foods you can possibly consume for INCREASING your omega 6 tissue concentration are:

Commercial peanut butter
Common oil-roasted snack nuts
French fries
Other Fried foods at restaurants
Salad dressings, including most vinaigrettes and Caesar dressing as well as Cole Slaw
Commercial Mayo and mayo-based sauces like aioli and remoulade
Doughnuts
High-fat sweets like Hostess Twinkies, Oreos, etc.
Margarine and foods often made with margarine like cookies and brownies
Vegetable oil, especially corn oil
Shortening and foods with shortening, such as most biscuits and pie crusts