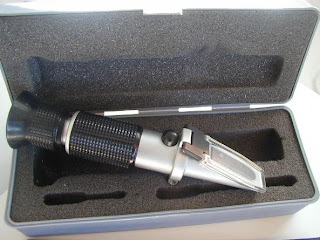 While I of course am still very unsure of what to make of my RBTI adventure overall (it’s only been a week, and it is quite a shocking mind funk), I feel comfortable saying that there is at least something of value going on here. How much value? I don’t know. It remains to be seen. I have no doubt that some seriously undesirable body chemistries can be greatly improved, and from the improvement many health problems of all kinds can be improved along with it. This is obviously a very familiar concept here and in the world of nutrition and natural health to begin with.

While I am most skeptical that the ideal urine and saliva pH is 6.4, what I am becoming increasingly certain about is the absolute awesomeness of the tool used in RBTI known as the refractometer. The refractometer is a simple agricultural tool that measures the degree of refraction as light passes through a liquid. The result is a number representing the total amount of dissolved carbohydrate in the liquid (I thought this number was the ?Brix? number, but was corrected by DML on that ? thanks dude).

What’s so cool about it is that it really is the best measurement of your true sugar levels. The mainstream thinks it’s all about the blood sugar level, and this can be revelatory, but often the carbohydrate levels in the urine and the blood move in completely opposite directions. This is particularly true as it pertains to what people casually refer to as ?hypoglycemia.

Hypoglycemia is a term that drives many in Western Medicine berserk. They go nutty nuts (a technical term used by Martin Short in his role as Clifford ? one of the most monumental and inspiring motion pictures in the history of film) because actually having blood sugar levels in the range of hypoglycemia (below 65 mg/dl) is very rare – and you can go below that and sometimes feel just fine, with no signs of?an adrenaline surge.

In fact, if most people were to test their blood sugar when feeling that shaky, irritable, lethargic, headachy, mid-afternoon ?hypoglycemic” dip, they would find that their blood sugar is actually elevated. And this is where the confusion over what is really physiologically taking place in a person’s body stems from. It is most certainly hypoglycemia, but because the blood sugar is fine or even elevated, in the medical world this is not hypoglycemia but just some psychosomatic crapola. The refractometer settles this.

I’ll explain in a moment. First, let’s look at the ?hypoglycemia? experienced by one of the people who turned me onto Challen and the RBTI in the first place.

I had a very difficult time helping this person to rehabilitate herself from a high-protein/low-carb distance running combo that left her completely unable to metabolize food and hospitalized for months. She was a wreck. When carbohydrate was freely available to her system she actually felt pretty good. When it wasn’t, she would tremble and shake, vomit, lay awake sleepless, and deteriorate rapidly. We tried again and again to tweak macronutrient ratios and things like that, but still she would experience these crushing hypoglycemic blows.

What she was experiencing, without a doubt, was the symptoms of her adrenal glands kicking into hyperdrive in order to elevate sugar levels in the body. That’s where the shaking, psychological and mood disturbances, cold hands and feet, and so forth stem from. Not exactly rocket science.

And she was at her worst early in the morning. 4am is a very common time of day to enter into a hypoglycemic state and it progresses throughout the early dawn hours if no food is ingested. This person had a glucose meter, so she tested. During this hardcore (and I mean hardcore) hypoglycemic episode, her blood sugar levels would soar to 130 mg/dl (technically hyperglycemia!) ? a diabetic fasting level. But this person was definitely no diabetic. In fact, eating would immediately make her feel better and send the blood sugar plummeting to 75-ish.

What’s going on here is that the adrenals keep blood sugar elevated ? trying to deliver sugar to the system somehow, and when food is ingested insulin rises, shuts down the adrenal glands, and stops the release of glycogen coming from the muscles and liver (which is the source of the hyperglycemia during fasting).

There is always a push-pull going on between the primary sugar raising and sugar lowering forces in the body. In the most simplistic sense, activation of the sympathetic nervous system causes the body to release sugar from within, and when food is ingested the body switches into a parasympathetic state that allows the sugar to be stored and stops the release of sugar from within.

In someone with hypoglycemic tendencies, the sympathetic nervous system goes wild to continually try to make carbohydrate available.

The almighty refractometer tells the real story. If you want a tool that will tell you whether you lack carbohydrate or have too much, blood sugar testing ain’t gonna do it for you. The refractometer, however, is extremely reliable from what I’ve seen thus far. During those hypoglycemic dips, so common in the wee hours of the morning and in the early afternoon, the refractometer reading of the urine will tell you all you need to know.

Now, when this person tests the sugar levels of her urine, it will confirm if she is hypoglycemic or not (but of course, by now, she knows exactly what it feels like to have the sugar level dipping too low ? hypoglycemic symptoms emerge like clockwork). The reading will be 1.2 or less, and in her case, with a severe problem, it is often much lower (like 0.5). Yet, her blood sugar often moves in the exact opposite direction.

Part of the RBTI program is keeping the sugar levels stable in a small range instead of a large, chaotic roller coaster range. And many years ago, when I first ate to keep my sugar levels as stable as possible by eating precise amounts of carbohydrates at precise and consistent meal times, I no doubt experienced the benefits.

If you know, even after doing RRARF (which can increase your glycogen storage capacity, improve glucose clearance, and other things that are helpful in keeping sugar levels stable), that you still have some lingering sugar swings that are causing you problems with energy, sleep, mood, focus, appetite and cravings, and more ? there’s no question that using a refractometer and figuring out the precise times of day, number of minutes after meals, and so forth that your sugar levels tend to tank could be a huge game changer. Then, by simply eating a piece of fruit or two during that time, you may in turn be able to keep your sugar stable enough to reap the many potential rewards of keeping this stable (and keeping the stress response dormant).

From what I have gathered so far, Challen’s rules regarding hypoglycemia couldn’t be simpler. Whenever sugar levels are below 1.5 on the refractometer, eat a piece of fruit or have a sip of juice (and get to know at about what time that is going to happen). If you have sugar crashes in the wee hours of the morning, make sure not to eat heavy in the evening and keep an apple or glass of juice by your bedside. That’s it. Complicated stuff I know.

But seriously, Challen strongly thinks that the refractomer alone would be enough to really improve people’s health. I tend to agree. For self-care and dietary fine-tuning, it shows a lot of potential. Seeing how unstable some people’s sugar levels are with the use of the refractometer, more medical folk would really understand hypoglycemia, and realize that the problems are not just all in people’s head when the problem doesn’t show up in the unreliable glucose tolerance test.

Granted, this article?is really an oversimplification of the whole picture of sugar regulation and how sugar levels interact with the pH and salt levels. But like I said, I do suspect that the refractometer does have a medical value aside from the strict practicing of the full?RBTI?program. I can’t wait to get one and play with it.