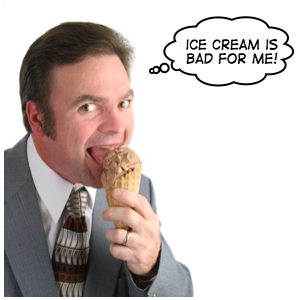 Intuitive eating ? which is best described as eating what you want, when you want, because you feel like eating it (with or without a ?damnit!) ? is a great concept. Sure, it has limitations. One is that superstimuli such as artificial sweeteners, flavor enhancers, and pornographically-delightful foods like chocolate, cupcakes, Mountain Dew, and potato chips often induce us to eat, not for hunger’s sake, but out of an empty pleasure-seeking compulsion (sort of that ?just one more? feeling you get when flipping through channels at the end of an unsatisfying day, or hopping around from site to site on the internet with that subtle whisper for gratification in the back of your mind).

But it’s worth recognizing how much more intelligent our bodies are than our minds when it comes to our physiological needs. A very simple example of this occurred the other day and really made me think. I hadn’t thought about it much before because it is so truly automatic, intuitive, and instinctual.

That simple example is how thirsty you get when you eat salty food. At first glance this seems like nothing. Like no big deal. But truly, the vast system of regulatory mechanisms in our body involved in this simple impulse is humbling.

The human body has a very tight range when it comes to the ratio of fluid to sodium. It wants to maintain that level for optimum health. If you consume salty food, you need more water. If you consume food without salt, you need less water to dilute the small amount of natural sodium found in the food. But our thirst really does a fantastic job of regulating this for us. Thirst is a manifestation of dozens of biochemical communications that result in a little lightbulb going off in our brains that says, ?Damn an ice cold glass of ?x? would really hit the spot right now.

But even something so simple as sodium regulation is highly dependent on you being attuned to the cues your body gives you to drink. The danger arises when we have an external idea about whether water is good or bad for us, or salt is good or bad for us, or whether or not we should drink water with meals, or being told that we could die from dehydration if we don’t drink 6 quarts of water a day while working out in the hot sun (A safety handbook given to Forest Service employees, for example, suggests that one quart of water needs to be consumed every hour when engaged in hard physical labor. My supervisor just about died from doing this once, from inducing severe hyponatremia ? dangerously low sodium levels, out in the middle of frickin? nowhere).

All of this junk is mental interference that clogs up an otherwise well-oiled and sophisticated system. But even the smallest idea can do it, such as thinking that sugar will cause “insidious weight gain” and drinking water instead of Gatorade during intense physical labor/exercise.

It’s also a great example of how something simple and pure, like water, can save your life or be deadly depending on the context. Context is everything, and even water has a long list of ?contraindications? depending on the circumstance. Our bodies are always in flux with changing demands, situations, and a constantly-transforming physiology dependent on something as simple as the time of day. A study mentioned in a book Rob A. sent to me actually showed that the prime determinant in whether a person developed side effects from chemotherapy (such as hair loss) was the time of day that the chemotherapy was given!

As it pertains to water, many people could benefit from drinking more water I’m sure, but give too much water to an infant and it can trigger seizures from low sodium levels, as this study shows.

That study is actually what got me so intrigued by this simple salt and thirst regulation system, as supposedly it is very difficult for those with a low metabolism to retain salt, and low sodium levels can induce seizures. The person I know who has problems with seizures hates water and loves salty food ? and thinks it would be healthier to drink more water and avoid foods with a high sodium content. I think her body probably knows best on this one, and it is no accident that these are her preferences.

Speaking of which, I have made mention several times already of allowing this person’s daughter to eat absolutely everything she wanted starting two months ago. Back then she had severe sleep problems and was wetting the bed 3-4 nights per week. She has not had these problems at all in about six consecutive weeks since she was allowed to turn up her nose at dinner when it didn’t look good and eat massive gobs of ice cream instead. No longer is she forced to clean her plate or eat her vegetables, or meat, or starch, or whatever. And her tastes and cravings have become very well-rounded ? with no more tension and anxiety and battle over eating time either. Intuitive eating can be a great thing.

And you never really know what your body might need to rebalance itself. I just received an email yesterday about many health benefits a person experienced after ditching coconut oil and eating a bunch of mayonnaise instead.

Think about all the mental interference you put up between your body and its natural cravings, impulses, and preferences. Many people notice health improvements when they just step out of the way. And this goes not just for eating, but for everything in life ? certainly the type, duration, and time of day you get some exercise and movement, or the time you wake up, or whether or not you lay down and take a nap in the afternoon.

Stay tuned for a follow-up post to this, as intuitive ?living? is only one tool in the toolbox. As you know, information can help, and investigation (of how you respond to certain foods, drinks, exercises, bedtimes, supplements, etc.) can help even more. Each by itself is limited in its usefulness, but taken together could be a pretty sophisticated way for figuring out how to get and keep your body in a harmonious balance.