One thing I’ve been keen on since the beginning of my ?investigation? is the equal and opposite reaction of the human body to the things you force upon it.

There is no end to the repetitive advice to eat less and exercise more to achieve any number of health benefits. When people with health problems increase their exercise level and decrease their food intake, a number of positives immediately jump into the spotlight?

3) Triglycerides fall off a cliff! Woo-sha! (this exclamation will be familiar to anyone that’s ever been forced to watch the ?Verbal Judo? training video)

5) And, the subject of today’s jibba-jabba, is that blood pressure drops! Boo-yah!

Of course, things are never quite that simple. If it were, we all could’ve exercised and starved ourselves to good health. But when humans pursue such endeavors, and go to battle with their appetites, the body makes some adjustments to steer you back from whence you came. 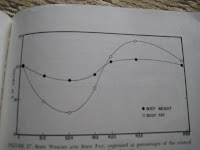 There’s no better example of this than Ancel Keys’s marvelous 1385-page opus The Biology of Human Starvation. In a prior post on calorie restriction and weight gain, I revealed some nice graphs showing that body fat decreased, and then increased well above starting levels prior to the 24-week low-calorie period (about 1,600 calories per day).

There’s not much use in lowering your body fat levels by reducing your calorie intake if doing so makes you want to increase your calorie intake while slowing down your metabolism. In fact, the men actually INCREASED their body fat levels by 40% by switching from a low-calorie diet to resuming eating to appetite before slowly losing most of it within the next year. This fat was primarily abdominal fat as well, the type of fat associated with metabolic syndrome.

Overweight people have a similar reaction as well, losing weight with calorie restriction and then, in over 95% of clinically-studied cases, gaining it all back and ?bringing some friends along with it.

Keys discussed blood sugar curves as well, noting that they typically fell during fasting or semi-starvation before spiking to levels higher than they were at the start afterward.

Finally, to add another component to metabolic syndrome’s relation to the aftermath of calorie restriction ? Keys discusses this same pattern with blood pressure. When you consume fewer calories, blood pressure falls like there’s no tomorrow. In fact, when I underwent semi-voluntary semi-starvation, my hypotension was so severe that I nearly fainted every time I stood up ? a symptom reported amongst all 32 of Keys’s semi-starvation subjects.

But, this blood pressure-lowering effect doesn’t last. In fact, Keys points out some interesting data from the famine in Leningrad when the Nazis blockaded the city and cut off food supplies.

Prior to the famine, hypertension was somewhat common ? something like 10% of doctor’s patients. During the famine, that level dropped to just 2%. Oh Jolly Triumphant! Cure hypertension ? eat a few bites of stale bread and a slice of the dead guy you went to high school with (you never really liked him much anyway), just keep those calories low!

Fascinatingly, but not surprisingly, Keys reports:

?The substantial improvement of the diet in 1943 was paralleled by an epidemic incidence of hypertension.?
??
?Before the war patients with hypertension accounted for about 10 per cent of all admissions to the Therapeutic Clinic of the Pavlov First Medical Institute. This proportion dropped during the period of semi-starvation and increased progressively thereafter through 1943. In January 1943 patients with hypertension constituted 20 per cent of the admissions, and by June of that year the figure had risen to 60 per cent.
??
?Obviously, many factors may have been involved in this epidemic of hypertension in Leningrad, but the outstanding peculiarity of the period was severe semi-starvation for 6 months, followed by refeeding, with the necessity for hard work at all times.

Those repeating the mantra to eat less and exercise more to cure all that might possibly ail you – hypertension, insulin levels, blood sugar, triglycerides, body fat ? yep, ALL the facets of metabolic syndrome, mean well. They do. And data supports that you will in fact improve all of those risk factors for health problems if you do exercise more and eat less.

But this advice remains ignorant of the body’s response to such strategies. It’s like stretching a rubber band and then letting go. And since you don’t just break even in your attempt, but usually make all of your indicators worse given sufficient time, that brisk snap of the rubber band is basically an unabated shot to the groin at point blank range. The consequences are identical to the aftermath of my 2-week vegan diet discussed?HERE (updated).

If your body is hungry and tired as hell, it is not making a mistake that you should attempt to correct. It is not wrong and in need of your supreme cognitive reason to step in and show it how to keep itself healthy. If you go to war against yourself ? a battle of mind vs. body, let me know so I can go all in on ?body.

Eat better, not less ? even if, in the short term, it makes your body fat increase, your triglycerides increase, your blood sugar increase, your insulin increase, and your blood pressure increase. In the vast majority of cases, this is just as temporary as the positive results you might’ve seen doing Jenny C.

And you don’t want LOW blood pressure any more than you want to have hypertension. I’d actually like to see my blood pressure (104/62) come up considerably, and expect it to do so when I begin on the milk diet in a week ? as this was consistently reported by milk diet authors to take place in anyone with blood pressure below 120/80 (while ALWAYS returning hypertensives back to normal as well).