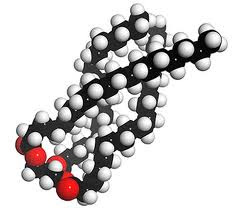 Here are a couple of fresh new videos about Triglycerides – little fat molecules that hang out in our blood, tissues, and liver. The first is an ode to what you can do to lower your triglyceride levels if that is an issue, and what metabolic effects can be expected if you do?(reduced leptin and insulin resistance and a corresponding decrease in the appetite to metabolism ratio, increased energy levels, and so on).

The gist, for you video haters out there, would be to:

1) Increase the starch to simple sugar ratio in the diet – particularly fructose found in soft drinks and juices
2) Reduce alcohol consumption
3) Increase fiber intake (unrefined starches instead of refined starches)
4) Decrease the omega 6 to omega 3 ratio in your diet (which can take years to take effect)
5) Eat solid foods, and no liquid calories

By the way, the shirt says “Arnold is Numero Uno,” his vintage shirt from the movie Pumping Iron. Chris from http://www.zentofitness.com/ should like it.

Next up is a simple video on why the belief that “spiking” insulin again and again leading to insulin resistance as portrayed by various low-carb authors is a myth. Excess triglycerides appear to be the predominant?cause of insulin resistance, not spikes in insulin from a high-carbohydrate meal. If the latter was the case, rural Asia and Africa, home to a diet consisting of 60-90% of calories as carbohydrate,?would have the highest, and not the lowest rates of obesity, type 2 diabetes, and metabolic syndrome.

Last but not least – It’s About Friggin’ Time (AFT) for a new 180 Kitchen Video. This time – it’s my all-time favorite without any shadow of a doubt.Click here to become a Corn Star.?