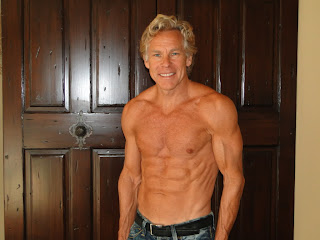 Hey, sorry about my absence late last week. Wednesday distraction, Thursday drama, Friday crisis, and weekend recovery explains the last 5 days. Good stuff. All is well now though. Where were we? Ah yes, I wanted to continue our discussion of some popular diets/gurus. As promised, today we discuss Mark Sisson of http://www.marksdailyapple.com/

For starters, I want to make this perfectly clear. Sisson is one of the best health icons on earth ? he’s truly the best of the low-carbers. He is running around advocating a nutritious, whole foods-based diet with no truly crippling restrictions ? sort of an 80/20 rule approach. The guy drinks coffee at times, eats chocolate, has cheat meals, and otherwise has taken a general health ?blueprint? and custom built it into something fairly safe, reasonable, easy to follow, and fun. His exercise advice is great. He encourages good sleep, lots of rest, having fun outdoors, getting natural sunlight ? the list of pros goes on and on.

In an honest review of a health guru, you have to admit ? he’s really on track with a lot of stuff.

But it’s also important to spell out exactly where Sisson comes up short ? not to attack the guy or nitpick his program, but more to provide a resource online for those who are failing miserably following his general guidelines and need to hear the other side of the story. At the end of the day, there are many out there that will be demolished by trying to run sprints, lift heavy things, and go on long walks fueled by less than 150 grams of carbohydrates per day ? what Sisson calls the cutoff that leads to ?insidious weight gain? if you exceed such levels. Don’t even get me started on that. Well, okay I guess I guess I should take a closer look at that bold statement. That’s what this post is all about?

Yes, you heard that right. In Mark Sisson’s book, The Primal Blueprint, he shows a little chart with carbohydrate levels ideal for weight loss, weight maintenance, and the levels of carbohydrate intake that lead to, in his words, ?insidious weight gain. Get above 150 grams of carbohydrates per day in your diet and you enter the danger zone. I have said this many times and I will say it again ? in all the information I’ve ever read on nutrition and health, this could very well be the dumbest and most unsubstantiated tidbit I’ve ever come across. It is downright retarded, with 5 billion?. 5 BILLION living exceptions to the rule that a carbohydrate intake exceeding 150 grams per day triggers insidious weight gain. This is just plain stupid. I couldn’t even believe my eyes when I read it. This guy is, and should be, the laughingstock of anyone who studies obesity or nutritional science. He completely undermines his credibility as an intelligent person with this one uber-knuckleheaded and poorly-thought out conclusion.

Okay, that’s enough. Just had to get that out of my system. But here are some other important things that simply must be mentioned before we leave the subject of Sisson?

Consider what I heard on Wednesday during my ?distraction? from the computer for a day. I traveled across the state of Florida to meet with a very wealthy man with health problems and a strong desire to restore his vitality. Many years ago this guy had spent time at the Pritikin institute with low-fat guru Nathan Pritikin. Pritikin, according to this guy, was really a portrait of health that lived and breathed his health advice and looked young, lean, and more or less perfect. Of course, on the inside he was dying ? committing suicide at 69 and reported to perhaps have leukemia.

He was replaced by some other guy who supposedly looked even more impressive, with absolutely no body fat whatsoever and the picture-perfect body of what, in the modern era, is erroneously used to symbolize health. He died far younger supposedly, of a stroke ? typical of someone with low cholesterol.

Professional athletes are looked upon as being physical specimens. Of course, athletes are notorious for long lists of health problems and dying young.

I bring this up, not because it’s all that relevant to Sisson, but because the idea that having a 6-pack is healthy and not having a 6-pack is second best is absolutely stupid. Being lean and attractive by modern standards, if anything, is a sign of terrible health not great health. I think of a supermodel having the worst health, followed by a lean, female collegiate athlete, followed by the morbidly obese, followed by professional athletes, followed by everyone else. Most obese people eating at McDonald’s today can at least reproduce. The same can’t be said about supermodels or say, female distance runners ? most of which cannot reproduce. At the very least, seeing someone’s abs because there isn’t enough fat on them to obscure them from view is not a cue to get on your knees and start worshipping.

This also brings up the question ? would Sisson be obese and unattractive if he had oatmeal or toast or even Pop Tarts and Fruit Loops with pasteurized milk on them for breakfast? Of course not. I know far more people with abs that eat Pop Tarts than eat a Paleo diet. Tyson Gay eats at McDonald’s and eats ice cream. Should we do that because he has abs and can run real fast? Or should we eat what Sisson says to eat because of his abs? Whose abs determine the composition of your diet? How much of Sisson’s appearance can be attributed to the junk food diet he was raised on and how much can be attributed to the low-carb Paleo diet he has eaten for the last decade or whatever? He was a world class athlete on standard fare. Is it a surprise that he also looks ?good? doing lots of smart training while otherwise taking great care of himself and eating a lower carbohydrate diet? Looks are more or less meaningless. Diets of the obese and the lean have been compared. There is almost no difference whatsoever.

But the real reason I wanted to do this post was an email I was sent recently. It was the same old story. Followed Sisson, everything was great, then everything went to hell within a year. This is the same thing that happened to me when I was eating 150 grams per day or less of carbohydrates for an extended period of time. It is very important for everyone who reads this to understand basic human physiology here. This is not a fluke or one in a million response to a low-carbohydrate diet. Low-carb diets are a great stress to most people, increasing the catecholamines, advancing the rate of aging, slowing down thyroid function, increasing inflammation, and reducing many important anti-aging hormones like testosterone, progesterone, and DHEA.

While many low-carb zealots will deny reality and go about searching busily to find evidence that supports low-carb eating ? that’s what they do, defend a pre-conceived conclusion ? this is the simple biological truth as I understand it?

Glucose is the ultimate source of cellular energy. Short and medium chain saturated fatty acids like butyric acid and lauric acid are the only thing that can compete. If you do not get enough glucose, stress hormones rise. At first this can feel amazing ? giving you tireless energy, blunting appetite, and burning up body fat. But over time the wear and tear on the adrenal glands to produce this increased demand for stress hormones catches up with you. When the adrenal energy finally wanes you are left with lower thyroid hormone production ? the adrenal hormones oppose the thyroid and even cause the thyroid gland to atrophy (the catecholamines cause the thymus ? the epicenter of the immune system to atrophy as well, which would explain my observation that low-carb eating increases proneness to allergies, food allergies, and autoimmune disease).

When the thyroid is negatively impacted, the whole system goes into decline. The thyroid controls the production of hormones like progesterone, DHEA, and testosterone ? perhaps the most important anti-aging hormones known. It is no surprise why it is so common for women to have reproductive and menstrual issues on a low-carbohydrate diet, especially if that is paired with a lot of stress or exercise or lack of sleep and so forth. Insulin resistance increases and glycogen storage becomes impaired. Thus, eating carbohydrates can trigger massive hypoglycemic attacks (which, oddly, often reinforces people’s devotion to a low-carb diet). In men, testosterone falls. I for one had some pretty substantial erectile problems on a low-carb diet for example. My athletic performance and recovery was at an all-time low.

The list goes on and on. To think that no health problems could emerge from eating a low carbohydrate diet is absurd. I have had plenty ? from chest pains to increased allergies to foul body odor to mood disorders to digestive problems to insomnia. Hundreds of people have gravitated to this site after their health was ravaged by prolonged low-carbohydrate intake.

Lack of carbohydrate intake is just one issue with low-carbohydrate diets. Another is intake of excessive amounts of animal protein, which I have found to be particularly destructive. Animal protein concentrates highly-inflammatory amino acids like tryptophan, methionine, and cysteine. After the growth and development stage of life, unless you are trying to add muscle mass for bodybuilding, there is only a tiny dietary requirement for these amino acids to maintain lean body mass. Any excess is, I believe, a huge detriment. Eating large quantities of protein in general, particularly without complementary carbohydrate, raises the hormone glucagon as well, which triggers the stress hormone and inflammatory chain reaction in the body.

Anyway, I’m done with this rant. The point of this post is very simple. There are people out there brainwashed into believing that mimicking a caveman by fasting, eating a low-carbohydrate diet with a bunch of meat, etc. is a surefire path to everlasting health and Sisson-like abs. This is false. More than that, some aspects of Sisson’s approach are causing health problems in people, even in those with seemingly-miraculous health benefits initially like those I experienced with a similar approach. Abandoning nonsensical phobias like the fear of insidious weight gain if more than 150 grams of carbohydrates are consumed is very important, and there are literally millions of people out there with low-carb-induced health problems that could be easily overcome if they were able to get past their carbophobic stigma.

For recovering from some of these issues and guru infatuation ? Sisson or otherwise, read Diet Recovery?on how to recover your metabolism from prolonged restricted dieting of any kind.