Nearly everyone who has toyed around with the ideas floating around this blog has experienced the power of the calorie. Sure, 4 out of 5 of us have added somewhere between a little and a lot of unwanted body fat doing so, but at the same time have arrived at a place where we could eat pretty much anything, in whatever quantity we desired, without seeing any subsequent gains in body fat. Along with it came huge improvements in digestive abilities, mood enhancement, sleep improvement, increases in sex drive, and any number of different improvements to be expected with a rise in mitochondrial activity from surplus calories.

The current question is ? can we get the benefits of overfeeding without the drawback of increased body fat accumulation? In other words, can overfeeding be used for health improvement AND big improvements in body composition simultaneously?

Enter Maximum Nutrient Partitioning ? a concept developed by a well-researched guy who calls himself the ?Vegan Master. While I have no love for a strict vegan diet, and strongly believe that it is a dead-end path to imbalance and deficiency based on many testimonials and run-ins with long-term vegans that I’ve had, this should not discredit the ‘system? that this gentle man has developed. 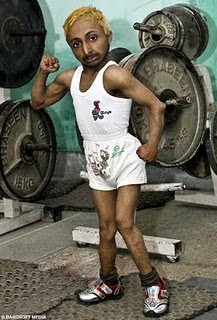 I was first turned onto this blog nearly a year ago by 180 commenter and host of what is becoming an excellent body recomposition blog ? Riles of: http://www.thelifeofriles.blogspot.com/

Note: Riles is huge as you can see! Ha ha. That’s not actually Riles, but is one hell of an awesome photo. God Bless the internet!?

Like most things, what I read of the Vegan Master, and the ideas behind his Maximum Nutrient Partitioning plan planted quite a seed, and just as Riles mentioned in the comments section of a recent post, he gained 9 pounds of muscle and lost 2 pounds of fat in just 4 weeks following MNP pretty strictly.

No, you postmenopausal ladies probably shouldn’t expect an identical response, but the same rules do apply, and you may just find that you do get a little muscle growth with simultaneous fat loss on a program that follows the general recommendations of MNP.

The basic premise of MNP is to make sure that the protein you eat is shuttled into muscle cells while simultaneously preventing fat from being shuttled into fat cells. In other words, gain the largest amount of muscle without gaining any fat ? and potentially even losing a little.

In order to gain muscle, a calorie surplus is the ultimate tool. MNP, just like the HED, is a form of overfeeding. However, instead of being high in fat compared to a typical diet and moderate in carbohydrates, it is very high in carbohydrates and very low in fat. Just like I mention in the this ebook, if you had to choose between getting in extra calories as fat, or extra calories as starch, I generally lean towards the starch. Starch is both the ultimate metabolic enhancement fuel due to its impact on leptin and leptin sensitivity and the ultimate muscle-building tool as it is the taxi driver that drives protein into muscle cells ? a.k.a. protein deposition.

So rule #1 of MNP is to maximize the amount of carbohydrate in relation to fat as possible ? striving for roughly an 8:1 ratio of carbohydrate to fat. As this ratio rises, the ratio of dietary protein deposited into muscle cells also rises.

Rule #2 is to eat an excess amount of calories. We all know about that one. Once again, the more calories you eat, the more protein you deposit into muscle cells. Just a few hundred calories above maintenance levels is enough to do the trick. There is no question that eating is by far the most anabolic (muscle building) thing a person can do. A typical mixed overfeeding regimen that results in 20 pound weight gain will yield a 5 pound increase in lean body mass (25% lean gains on average). The trick is tweaking the diet composition and exercise habits to yield 100% lean gains, which is what MNP aims to do.

Rule #3 is to maximize the ratio of starch to sugars (sucrose and fructose) in the diet. This basically just serves to increase the total carbohydrate to fat ratio of the diet, as sugars metabolized as fructose are converted to fat in the liver at a much higher rate than starches and other sugars that are metabolized as glucose.

Rule #4 is to do a couple of solid full-body workouts each week to further encourage muscle growth and development. Although I have had poor luck with high-intensity workouts in the past, much of this failure could have been due to the low intake of carbohydrates in my diet ? producing too much cortisol and preventing muscle from being re-built. A workout where you try to push your limitations and force an ?adaptive response? however, is probably ideal for most people with decent hormonal health and a diet better suited for high-intensity efforts.

And that’s it. Pretty simple, but in many ways sound ? and in even more ways bland :)

Does it work? My initial experiences (decreased waist size with no change in scale weight) with similar ideas suggest that it could be very successful, and that the ?HED? does have the potential to be refined in such a way as to help people improve their lean body mass to body fat ratios in the pursuit of better physiques ? if they so choose.

Anyway, here’s the link to MNP for more reading, and a great clickable references section behind the theories.

For those who would rather shoot themselves in the head than eat a low-fat diet, you’ll be relieved to see I have posted a new recipe and video for my beloved homemade sausage HERE.

A note on high-carb/low-fat failures:

We all know that most high-carb/low-fat pursuits were miserable failures. I believe that those failures can all be attributed to:

1) Being too low in calories ? trying to eat less and exercise more on a low-fat diet is a great way to dissolve lean body mass, obliterate the metabolism, trigger hypoglycemia, and spark out-of-control hunger, addictive eating behavior, and rebound fat storage. Even if you weren’t trying to eat less, you probably were as removing the fat from your food is a huge deterrent to calorie consumption.