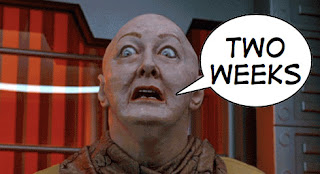 Speaking of which, the inspiration for this post came from my mother, who I’m staying with for a few weeks here in “Nashvegas.”? Yesterday she went to have her hair done down at the local beauty joint, and came back excited to tell me what she heard down at the salon.

Seems someone came in after having lost a 100 pounds or so on Medifast.

You get the picture. Of course, she’s there because she is having some serious problems with her hair falling out. This must be a side-effect of healthy weight loss and feeling amazing. And in fact, it is. It’s a recognized side effect that Medifast acknowledges. They recommend, to minimize this side effect, to take 1-2 T of canola oil daily. Good to know.

I guess it’s just like how one HCG weight loss site describes hair loss while on HCG – “Some may experience hair loss while their thyroid is going through changes and resetting itself.”

Oh,?”resetting itself.”? That’s what it’s called. I see, as in resetting itself closer to the metabolism and 93 degree body temperature of the tree sloth.

So what?would you do if you?had undergone a medical treatment that made your hair fall out – something that the workers of the salon told my mother “happens’to a lot of people that come in here and have lost weight quickly?”

This?woman?announced that she was going to take her husband and 13-year old daughter to the doctor to get them started on Medifast.

When I rule the world, everything will be wire-tapped. When someone says something like this?in public sirens will sound, and?Ninjas in Chuck Norris masks will drop from the ceiling and’taze people into a mild coma. Offspring will be immediately taken into custody by Child Protective Services’s (CPS) special Dieting Parent Unit – DPU (yes, all government branches are to be referred to by their acronym, which will be a law).

At that point they will be shipped to a chain of?paradise islands in the Pacific currently inhabited by Lorelei, Gina, Pippa and others but soon-to-be?owned by me and purged of all non-believers. There they will be?able to eat to appetite of unadulterated, nutritious foods and frolick in the sun in loin cloths with me and’the ghost of Bernarr MacFadden who, post-mortem, has invented a device that, when activated, erases all memory of the existence of television, internet, airbrushed models, and commercial flavor enhancers.

And yes, Johnny Lawrence, if he is still alive after his last feast at Waffle House, will train the team of Ninjas in Chuck Norris masks.

Summary:? Medically-supervised or not, intentional weight loss via calorie restriction comes with a great penalty to your health and metabolism, leads to weight regain within a year or two, and increases risk of heart disease, type 2 diabetes, and, ironically, obesity. Like author Jon Gabriel describes – “Dieting is like holding a volleyball under wudder (water). You can keep it down for a little while but as soon as you let go it shoots up much higher.”


?’treating cosmetic weight loss as if it were medical and moral issue tends to make people both considerably fatter and a good deal unhappier than they would otherwise be.

?’there is a great deal of evidence that weight LOSS increases the risk for cardiovascular disease among ?overweight? individuals…”

?The case against fat proceeds on the assumption that if a fat person becomes thin, that person will acquire the health characteristics of people who were thin in the first place. It also assumes that there is some reasonably safe and reliable method for producing this result.