Milk Does a Body Good 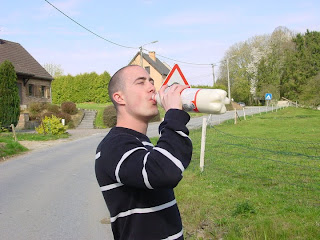 Not-so-little anymore Martin has been contacting me for quite a while now.  He doesn’t play around in the comments section, but hits me up directly.  He’s a good kid, and already has two very extreme diets under his belt, which you’ll hear about shortly from the kid himself.  Anyway, he’s undergone quite a body transformation since the vegan/fasting combo. of his late teens.  Look at that little Belgian stud over there chugging some milk, up 23 kg (50 pounds).  Now that’s something to “Bragg” about.  Why eat the green grass he’s standing next to when a cow will turn that into milk for you – and enjoy doing it?  My comments on his post are IN RED.

Hello 180-followers ! I’m Martin, I’m 22 and I’m from Belgium. You have never heard of me because I don’t really post on the blog much (just a couple of anonymous posts). But Matt has definitely heard of me (sorry again for bothering you so often with all my questions)! I started following his recommendations in January this year. But to give you a better idea of my story, I must go back a couple of years.

I think most of my problems started when I was 18 and discovered Buddhism.  Hilarious way to put it Martin.  Keep morality away from your mouth, which reminds me of a great South Park episode.

I became extremely interested in it and started practicing meditation on a daily basis. I joined a meditation group (Zen Soto) and I quickly became a vegetarian as everyone there was a vegetarian. I didn’t know much about nutrition then and I honestly didn’t care at all. I wanted to save all those poor animals !! It took a good year before I started feeling really ill without knowing why. That’s when I started being interested in health. Unfortunately, I got interested in people like Bragg, Shelton and other crazy hygienists and I believed everything they said ! I thought that my problems were probably due to the dairy products and eggs I was still eating and I decided to become a strict vegan.

That was in January two years ago. I was getting worse, and pretty quickly, but I refused to accept it. So I embarked on a long fast, hoping it would cure all my problems. I wanted to do a complete fast until the ?natural return of hunger? but my mum (and my family) freaked out and I accepted to stop after 11 days. I was 59 kg for 1m 81 !  I was awfully skinny!  Fasting is probably a great tool for many health problems – unfortunately it is the starved vegetarian/vegan/religious nut that usually turns to fasting to solve health problems – and fasting is sheer poison for an under-nourished little twig.

After the fast, my digestion got terrible, (probably from low gastrin secretion and slow transit time) I couldn’t put on any weight and my sex drive had simply disappeared! That’s when I realised that I was wrong. As you may have understood, I’m really into extremes so I started being interested in low carb diets. In only a few weeks, I transitioned from a vegan diet to a VLC (very low carb) diet ! I stayed on the VLC diet from September until December (one and a half years ago). Then in December, I decided to follow a strict carnivorous diet. I stayed on this ZC (zero carb) diet for a whole year! The reason why I wanted to try this extreme diet was not for weight loss reasons but because I was feeling unwell and believed it was caused by candida overgrowth and as many of you may know: ?Carbs feed candida so stay away from them?. I took the advice to the extreme.  Martin was able to rebuild alot of lost muscle mass on zero carb, as you can see in the photo below – a big improvement over a vegan diet and fasting for sure. 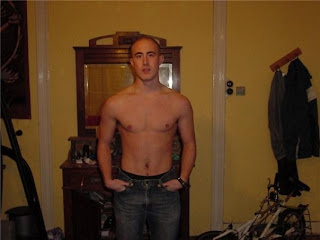 I saw initial improvements but they quickly stopped after a few months. But I stayed on the diet because I was afraid to add carbs back as I thought they would make me feel even worse. It’s only when my sex drive started to plummet that I decided to try something new. I had a long conversation with Christopher Rosenfelt and we decided to try the diet recommended by Kwasniewski. We were interested in Matt’s recommendations but it seemed too crazy. Especially because of Bruce and his insane posts !! But my interest grew and I finally decided to read Matt’s books to see what it was really all about. It made a lot of sense to me and I decided to start following his recommendations in January this year.

To my complete amazement, adding all those carbs back did not influence my candida symptoms at all ! Most of them actually improved (brain fog, fatigue, yeast infection, white tongue, digestive disorders, IBS, etc.). I’m not feeling 100% better now but my health has clearly improved and I think that most people could confirm it. I can’t really give you much information about my body temperature because I didn’t really check it out much. I did it once and it was too low but when I left the thermometer for 10min under my arm, it became normal. So I stopped checking it. I checked my blood sugar levels though. At first, I was close to 120 four hours after eating. But today, I checked again and I was 114 after 1 hour and 95 after 1 hour 50. So my insulin sensitivity seems to have improved a lot !  These are still a little bit high, but definitely a big improvement.  There’s no question that insulin sensitivity improves when eating a quality mixed diet to appetite.  Hopefully you’ll drop each reading by about 10 points. If not, those are still respectable numbers. As long as they don’t start rising with age, you’re in good shape.

As for my weight, I’m now 82kgs and I’m pretty thin. I don’t know my fat percentages but your can see my abs and intercostal muscles (I assume you are considerably leaner than you were in the ZERO CARB photo based on this description). So I think it is pretty clear in my case that eating HED does not cause excessive weight gain. I was 78 on the ZC diet so I put on 4kg. I guess that 2 of those are water, and then maybe some muscle and fat. I don’t really know but I don’t look fatter and you can definitely see at my chest and shoulders that I have added some muscle. I look very muscular now. Many people have commented on my new physique.

There are a few things I would like you to remember from my story. First, please, PLEASE, don’t ever listen to vegans and vegetarians. Block your ears and run away unless you want to screw your health big time. (Stick your fingers in your ears! One of my favorite sayings!) Just like a famous French puppet says about commercials: “Je bouche mes yeux, je cache mes oreilles… Et je regarde pas! La pub? BAAAH!! ( = “I block my eyes, I hide my ears and I look away… Commercials?? BEEERK”). Then I would say that you mustn’t believe most candida websites blaming it on carbs. I had all candida symptoms and none of them got worse when I ate more carbs. I believe that sugar is the real culprit and I can’t eat too much fruit without feeling like crap.  Yes, carb-restriction does nothing for candida, except perhaps make a person hypersensitive to carbohdyrates.

I hope you enjoyed my story !

I wish you all the best luck for whatever health goal you are pursuing!