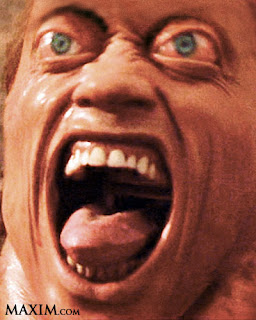 In Diet RecoveryI recently added some new content about the importance of stressing exercise intensity more than duration for achieving metabolic adaptations that help with achieving a better ratio of body fat to lean body mass. Strictly from a body composition point of view that’s neato and all, but there’s strong evidence that doing short bursts of hard exercise has very unique, and potentially unmatched health benefits.
The first time I ever paid attention to the term ?oxygen debt? was during my review of some of Scott Abel’s stuff. I didn’t count, but I’m pretty sure in his 5-Day MET DVD series he says ?oxygen debt? while gasping for air in between sets at least 372 times. It seems kind of important to the guy, who I consider to be perhaps the world’s leading expert on exercise physiology due to his blend of personal experience, training experience, and extensive academic pursuits of the subject.

Another thing that jumped out at me was hearing some of the verbiage used by Vince DelMonte, including the term ?oxygen debt. DelMonte claims to have had minimal success with building muscle on various programs in the past, mentioning that he was referred to in his youth as ?Skinny Vinny,? but that he finally found what works. And lo and behold DelMonte does a blend of functional training and weightlifting at maximum intensity to create an ?oxygen debt.

The theme is there again in Jon Gabriel’s work ? the idea of doing very high bursts of exercise as if something is chasing you ? and its striking ability to change the body’s metabolism to become less ‘thrifty,? making your body ?want to be thin,? and lowering the weight set point for automatic, hunger and craving-free weight loss.

Clarence Bass, Rachel and Alwyn Cosgrove, Dr. Richard Bernstein, Sisson, DeVany, Big Chief ? the list goes on and on. And now I’m talking about it too, as I have had substantial improvements in body composition since adopting Abel’s concept of doing what could only be called, confusingly, ?functional, high-intensity, interval strength training.

But my interest in the potential health benefits far exceeds my interest in using it as a tool to look like a man-beast when speaking on Metabolism at the 2011 Weston A. Price Foundation Wise Traditions Conference in Dallas this coming November (yes, you read that correctly). Perusing through the general concept of oxygen indebtedness is pretty exciting as it pertains to improving cardiovascular health, increasing functionality in old age, improving the stress response and adrenal health, lowering inflammation, improving asthma, and raising the metabolism overall.

I used to look at exercise like researcher Ray Peat looks at exercise ? through a narrow and short-sighted mirror. Exercise = Stress = Bad, therefore, enjoy some nice walks and a little stretching and eat the food (ETF). While it’s true that in today’s day and age most exercise pursuits end in tragic failure due to poor information, poor accompanying nutrition, and extreme efforts in pursuit of unrealistic and more importantly, unnatural goals ? that doesn’t mean that the right kind of exercise, done intelligently as part of a much broader set of healthy practices, attitudes, and nutrition, can’t be a powerful tool. It very well may be, and the oxygen debt, although it’s just one narrow element of the overall picture, could be the most important tool there is.

To begin with, let’s talk about ol? Ray Peat since I brought him up. One of Peat’s primary platforms is the belief that maintaining the proper level of cellular respiration and oxygenation is one of the most important and vital elements of aging well and avoiding degenerative disease. This is done, according to Ray Peat’s research, by keeping thyroid activity up (this, in turn, makes sure there is adequate production of hormones like testosterone and progesterone which oppose estrogen, the ultimate anti-respiratory hormone in his view). To this I would agree.

But an interesting connection is that thyroid activity and oxygen consumption exist in tandem. As we age, thyroid activity usually falls and oxygen consumption falls with it. Interestingly, one reason this may take place is due to falling lung capacity. As we age, our lung capacity diminishes, and oxygen uptake falls substantially. The end result is reduced mitochondrial activity/cellular energy production and a much higher chance of getting cancer, stroke, heart disease, neurodegenerative diseases, and all our disease faves.

This general process can be reversed, and while a whole foods overfeeding attempt like RRARF may very well force the body to adapt by increasing cellular energy production and oxygenation via thyroid encouragement, there’s no doubt that the right kind of exercise can do it too.

?Manfred von Ardenne discovered that your cells produce more energy when you practice short bursts of intense exertion ? a capacity you build with my PACE program. This improves the way your organs use oxygen, keeping them younger longer. By keeping your routine focused on short, intense bursts? you send waves of life-giving oxygen through every cell in your body.

Interestingly, Sears hints at what many of us have experienced firsthand, that endurance exercise has the opposite effect ? giving up lung capacity and fast-twitch musculature for doing maximal effort work, and instead slowing down the metabolism as much as possible so that less oxygen is used performing the endurance task. These are horrible and highly unwanted adaptations akin to starving yourself. More from Weird Al Sears:

?Aerobics, jogging and marathon running are low-intensity, long-duration exercises. The Harvard study clearly shows that this kind of exercise increases your risk of heart disease and death.


And here’s why: When you exercise for long periods at a low to medium intensity, you train your heart and lungs to get smaller in order to conserve energy and increase efficiency at low intensity.

So it’s kind of ironic that one could improve the oxygenation of their cells by striving to do exercise that’s hard enough to incur an oxygen debt (using more than you’re taking in and having to compensate for it later by panting hard or as Scott Abel says, ‘sucking in the room?), and lower overall stress hormone exposure by subjecting oneself to something that mimics a life-threatening emergency event and spikes stress hormones to the stratosphere.

But hey, just like forcing the body to adapt to burn more calories and expend less energy by stuffing your cakehole, short bursts of hard exercise (lasting 15 seconds to 4 minutes followed by recovery before you repeat) enough to make you really winded appears to induce some highly beneficial metabolic adaptations as well ? with a huge cardiopulmonary bonus. It requires no equipment unless you want it to, workouts contain 7-20 minutes of total expenditure (not including rest time) in Sears’s program for example (done 3 times per week), and it’s much easier on your joints, tendons, and cardiovascular system than endurance exercise or weight training (although I do believe that weight training with lighter loads like that used by Scott Abel can easily be incorporated into the oxygen debt theme without too much collateral damage).

?Oxygen is the basic fuel your cells need to keep moving. When you’re jogging, your body can inhale enough oxygen to keep that activity going for quite a while. But when you’re sprinting fast, the demand for oxygen is so intense you can’t go for even a minute. As you approach maximal exertion, the amount of oxygen required to keep you going will exceed the amount you’re taking in ? that’s the point when you begin accumulating an oxygen debt.


You may wonder why an oxygen debt is important. You might even think that pushing your body to that point is counter-intuitive. After all, why would you want to starve your body of oxygen?


The answer lies in your body’s ?adaptive response.


Think about what those words mean for a moment? an adaptive response is a change your body makes after confronting a challenge. If you don’t give your body new challenges, it won’t make these changes. In other words, you won’t grow or progress.


That’s one of the reasons why aerobics, cardio and long-distance running are not the best options for your long-term health. No progress will be made to build back lung capacity because you are not challenging your current lung capacity. In fact, because you are ?preprogrammed? to lose capacity with age, if you don’t train your body to make changes in response to challenges, you’ll actually start sliding backwards.


But when you give up these long, boring workouts, you can change your body’s experience with exertion.


When you achieve oxygen debt, your body responds. Plateaus are broken. Changes are made. First and foremost, your body reacts by increasing your lung volume and boosting your heart’s output.


By doing those kind of activities you actually ?ask? your body to make those changes. And in response, it does. You can train your body to make any kind of change you want. If you want small, tight lungs and decreased cardiac output, then keep jogging.

In the experiment one twin ran 50-yard sprints for 16 weeks and the other ran 10 miles for 16 weeks. Neither were asked to alter their diets. His experiment, as well as all the extensive?data he’s compiled with his patients, thoroughly disproves all of the following myths: