Paula Owens: The Power of 4

To find out more about RRARF, which stands for Rehabilitative Rest and Aggressive Re-Feeding, please read DIET RECOVERY!!! 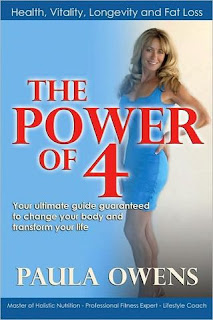 Now let’s get down to bidniss. After doing my book review of Rachel Cosgrove’s The Female Body Breakthrough, I was immediately contacted by Paula Owens and asked if I would review her book as well. Well of course I will! Send me that badboy and I’ll review it right away. And so I am.

Anyway, this is not some big promo for Paula Owens and her book. Like with the Cosgrove book I call ?em like I see ?em and am not in the business of making friends or creating alliances. Here is my most honest and level-headed review of Paula Owens and her Power of 4, which refers to the power of nutrition, lifestyle, exercise, and supplements.

Overall, the book gives the reader more or less the right information. Right away I could tell that Owens has been highly influenced by Diana Schwarzbein, Paul Chek, Charles Poliquin and others that are?pretty knowledgeable. These authors all generally believe that health is something that is hormonally determined, and that the best way to optimize the hormonal environment is through quality nutrition, a low-stress lifestyle with the right attitude, ‘smart? exercise meaning a preference for resistance training over endurance exercise, and supplements if needed.

With a foundation like that, the information in the book is more or less solid and can only stray so far from guidelines of the highest importance.

Of course the book has a pronounced low-carb bias due to such influences, which in the modern world probably does tend to outperform high-carb diets knowing that your average American receives 1,100 daily calories from a combined total of refined sweeteners and white flour. A low-carb diet eliminates this catastrophic problem, and is automatically superior ? especially in the short-term. But there were definitely some one-liners in there about ‘too many carbohydrates? as if carbohydrates were somehow the enemy. If I’ve discovered anything about carbohydrates it’s that shunning carbohydrates in general simply can’t compete with replacing ?bad? carbohydrates with ?good? carbohydrates ? which I view as more of an antidote to the problems caused by excess refined carbohydrate consumption.

But Owens is still clearly not an extremist by any stretch, and doesn’t deserve to be raked over any coals for her low-carb bias as it is VERY slight.

Rather, Owens should be truly commended for her excellent exercise information. Owens has several personal training certificates and it’s more than obvious that this is her area of expertise. Just as with Cosgrove, the exercise segment is by far the highlight. Some quotes from her chapter on reducing ?LSD,? or long, slow, distance training, are truly legendary. For creating an optimal hormonal environment for both physique enhancement, metabolism, and functional longevity, I couldn’t agree more that short, hard training and resistance exercise and avoidance of LSD is the ticket. Paula’s ripped female figure is strong testimony to that.

p. 193
“One must exercise for long duration and often in order to burn any amount of fat with LSD. This is how long distance runners maintain their slim physiques. However, when a runner sustains an injury and is unable to train their metabolism spirals down. This leads to increased body fat over time.”

This has been my response to endurance exercise time and time and time and time and time again. Only when it exceeds 20 hours per week is the calorie burn so high that fat has no choice but to leave your body. This exercise is very hard on the body, it causes muscle loss and a huge drop in metabolism (sends my basal temp. to the low-96’s), and results in a higher ratio of body fat to lean mass the MOMENT that you stop doing it ? which you likely will due to injury, illness, or burnout.

p. 197
“LSD exercise is problematic because it causes cortisol to rise unopposed by the growth-promoting hormones, testosterone and growth hormone. This creates a physical stress response to your entire body. Prolonged release of cortisol, whether from long-term physical mental, or emotional stress, or the wrong kind of exercise, atrophies your muscles, nerves and brain cells. This may explain why standard aerobic exercise is not effective for optimal body composition and why marathon runners exhibit frail bodies devoid of muscle. The duration – not the intensity – of the exercise is the most significant issue in regards to cortisol. Chronic over-secretion of cortisol causes a weakened immune system, a decrease in lean muscle, hair loss, thinning skin, infertility, inability to grow nails and a decrease in concentration and memory. Excess cortisol kills brain cells, including those in the hippocampus, where the brain processes emotions. Excessive cortisol production can also deplete serotonin levels causing depression.”

This quote is pure genius, and after the Thanksgiving holiday I hope we get a chance to dive straight into the diametrically-opposed functions of cortisol and testosterone ? and how this is a prime determinant of how you age, your body composition, your immune system, athletic ability, and more. BTW Scott Abel’s blog post on holiday eating is out of this world. Read it HERE.

So yes, overall Paula’s book is great. The exercise segment is remarkable and spot on. Now time for some negative criticisms?

Owens continually comes up with various lists of things to do in each category. While I wouldn’t disagree with many of her bulleted items in terms of say, their validity, I think it is a huge error to give your average person multiple lists of almost jaw-dropping length to focus on for health. Her list on lifestyle, for example, would be much better if she picked the top 4 most important things for people to focus on. Instead, the list, I kid you not, contains over 50 To-do’s, and includes nebulous and distracting things like:

?Refrain from judgment? and ?Journal your thoughts.

Her list in the nutrition category is even longer and puts the same emphasis, due to the nature of her lengthy bulleted lists, on including ?more green drinks to create alkalinity? and eliminating ?refined sugar.? Clearly there needs to be a little more prioritization going on there.

Of course, most of her bulleted items aren’t even discussed in detail. Several things that you are supposed to do would require a book on why you should do that. Lists of ?do this, don’t do that? without any explanation or reasoning as to why doesn’t sit well with me, and I can’t see such things making any kind of impact on a real person in the real world. Rather it obscures the few basic things that really do make a difference with a bunch of nebulous, paranoid, distracting stuff that really doesn’t.

While Paula may have some powerful know how and knowledge that she is eager to share, her strategy for writing this book was not very well thought out. She shared far too much with too little to back it up.

There were also some unbelievably odd and off-base statements made here and there. They really threw me off. For example:

p. 40
?Reducing your intake of sugar and refined grains, which are omega-6 fatty acids, will result in decreased triglycerides.

p. 41
?Grain-fed beef, refined cereals and vegetable oils such as sunflower, safflower, corn and soybean are foods high in omega-6.

Overall, I get a great vibe from Paula. There’s no question that if you are a woman (or man) living near the Phoenix area where Paula resides and looking for someone to help you improve your health and get a body that you never thought possible, Paula is the FIRST person to call. I have no doubts that her 21-Day Program is a great place for anyone to start when it comes to improving their health and body composition.

The book itself is full of great information, clouded by Mercola-fication of having 327 things to address when getting healthy instead of something more realistic, and just not that well written (typical of many great minds in the fitness field who attempt to write books).I would never discourage anyone from reading it though, as all of it is on the right track and there’s no doubt that the lives of many will be positively influenced by the gems that reside in The Power of 4. Thank you Paula, for putting it out into the world and overflowing with your passion for health. There are many in need of guidance out there, and I can only assume from what I know of you thus far’that you are one of the world’s best. Keep up the good work. And Paula, you are totally hot (like Gwyneth Paltrow without the macrobiotics-induced osteopenia). You don’t need your dog in the picture to make you look good :)? More from Paula at www.paulaowens.com 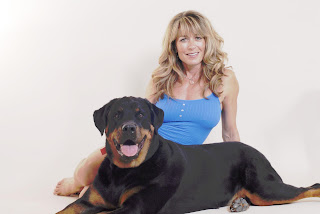