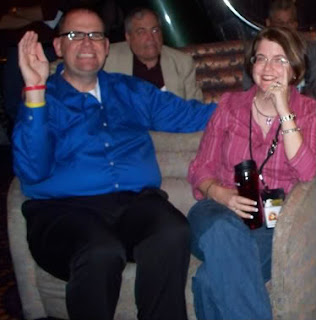 I came across Jimmy Moore’s resolve to eat only eggs, butter, and cheese the other day from someone who had contacted me. They contacted me because they had gone on the Aktins diet, lost some weight, hit a plateau, and had health problems in addition to ballooning in response to the least little bit of carbohydrate that entered their diet.

Jimmy is such a good guy. It really is upsetting to see Jimmy digging himself deeper and deeper into the low-carb dungeon. But Jimmy is trapped. He is the low-carb guy. His websites, business, and life are all dedicated to eating a low-carb diet. How does he escape? What else can he do but perpetually eat fewer and fewer carbohydrates until he’s so severely hypometabolic that the smallest trace of carbohydrate makes him gain weight? He certainly couldn’t take a break to try, say, a high-carbohydrate diet that is making nine out of ten diabetics undiabetic. (Don’t get too big of a boner for what I just linked to though.  It’s just another dead end with good initial results just like low-carb).  The low-carb faithful would turn on him like a Go-Kart.

Jimmy is the perfect embodiment of what I suggest everyone NOT DO. Jimmy has accepted and embraced the fact that he is ?hyperinsulinemic. He feels that this condition ?mandates? that he go on an even more extreme low-carb diet. And he is willing to eat any kind of extreme diet to cater to this perceived metabolic weakness. Not much thought is given towards the possibility of there being a strategy that fixes carbohydrate intolerance.

But hyperinsulinemia stems from being resistant to insulin. When your body does not respond to its insulin, the pancreas produces more insulin to compensate ? referred to as ?compensatory hyperinsulinemia. While it is true that eating a low-calorie or low-carb diet will certainly lower your insulin levels in the short-term, the core problem, which is being insulin resistant, is actually made worse. There is also strong indication that being resistant to the hormone leptin, which results in Jimmy’s basic condition of having a low body temperature, insulin resistance, and weight problems ? is exacerbated by a low-carb diet, especially when that low-carb diet is high in omega 6 polyunsaturated fat, which most low-carb diets are.

Ironically, Jimmy Moore’s greatest hero, the late Robert Atkins, understood as well as anyone that low-carb was not something you could do for life with good odds of success. He understood that it slowed down the metabolism. He understood that the low-carb diet, like other methods of losing weight, was a Catch-22. He also understood that artificial sweeteners were a big no-no. Jimmy’s loss of 180 pounds with a 59-pound regain in the last few years is about the BEST case low-carb scenario I’ve heard thus far. But eventually Jimmy will have to abandon the low-carb diet, and it will be a huge breakthrough for those with low-carb tunnel vision the day that he does.

May you someday heal Jimmy, and not be forced to dig yourself deeper and deeper into the prison of extreme dietary restriction that invariably produces health problems, and makes life progressively less worth living as each day passes.

But don’t say that I, or even Dr. Atkins, didn’t warn you that this fate would befall you:

??remember that prolonged dieting (this one, low-fat, low-calorie, or a combination) tends to shut down thyroid function. This is usually not a problem with the thyroid gland (therefore blood tests are likely to be normal) but with the liver, which fails to convert T4 into the more active thyroid principle, T3. The diagnosis is made on clinical ground with the presence of fatigue, sluggishness, dry skin, coarse or falling hair, an elevation in cholesterol, or a low body temperature. I ask my patients to take four temperature readings daily before the three meals and near bedtime. If the average of all these temperatures, taken for at least three days, is below 97.8 degrees F (36.5 C), that is usually low enough to point to this form of thyroid problem; lower readings than that are even more convincing. It may be appropriate for those of you who fit these criteria to be prescribed thyroid by your doctor, and if so, a natural form of the hormone, which contains T3, is far superior to the most popular form of prescription thyroid, synthetic T4.


Other possibilities include the use of aspartame, which in large quantities may inhibit weight loss. If you take in three or more servings of aspartame-containing foods or beverages daily, it may be worthwhile to switch to another sweetener to see if weight loss resumes.

Jimmy has a very low basal temperature (97 oral), and has consumed lots of aspartame over the years, mostly in the form of diet drinks.

This low-carb fairy tale, like most, is on track for an unhappy ending.