Yesterday, my beloved sweetie muffin pants was torn to pieces by who is considered to be the best oral surgeon on the face of the planet ? Dr. William Arnett in Santa Barbara, CA.

My girlfriend suffered from what Arnett referred to, in complex medical terminology, as a ?banana head.  “Your asymetries are out of this world” he said right before surgery.  Wow.  Thanks for the confidence doc!  She slowly developed a severe crossbite, which the docs hypothesize MUST have stemmed from a childhood injury to the jaw, as one side of her jaw grew after childhood
and the other didn’t ? causing her jaw to become super tweaked to the point where only 1 upper tooth made contact with the lower teeth. Made it a little tough to chew.

Today she looks kind of like Howard the Duck. I’m just glad this Howard the Duck is not in Cleve Land. Santa Barbara in May is well? I’m not complaining. I mean come on. I’m Caucasian ? so Caucasian that I drive a Mini Cooper and wear flip flops. Santa Barbara is heaven for Caucasians, where we can sit up on a large hill looking out across the ocean feeling morally elite for recycling bottles of San Pelligrino (shipped all the way from Italy) and using reusable grocery bags.  Yes we can!

Although it remains to be seen what her tastes will be, it looks like post surgery she will be joining me in consuming copious quantities of raw milk. But we did bring both a juicer and a pimped out blender with us, so she has other options. For the first 8-10 weeks, though ? liquids only. Hence the timing on the beginning of my raw milk diet.

What I found to be quite validating was what happened to Aurora physically between the time she was first examined prior to surgery (about a year ago) and how she was doing in the days leading up to surgery.

For starters, her body temperature is much higher. Not only that, but when she went to the hospital and her temperature was taken as part of her pre-surgery physical exam, the nurse actually said, ?Wow, 98.6! We don’t see this very often. The sad thing is that this reading was from an ear thermometer, which is supposed to run nearly a half degree higher than the oral temperature, meaning that the nurse sees very few people that hit what would otherwise be an oral temperature of just 98.1-98.2 ? in the middle of the day, much less first thing upon waking up in the morning. This speaketh volumes.

Aurora’s axillary temp. has been running as high as 98.4 lately (2nd half of cycle), up quite a bit from her chronically low temperatures in her teens and her undereating/overexercising phase.

More fascinating is that her jaw joint, once thought to be too fragile to even perform the surgery, has been totally remineralized over the course of the last year. You can see in the photo that the lower bone has a little indentation in the middle, forming a little bit of a Y-shape. That filled in over the last year. 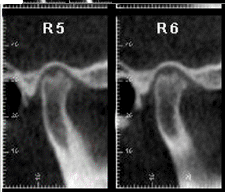 Arnett mentioned that the joint originally looked to be weak and potentially even arthritic. The change that took place was something that he had never seen before. No signs of any arthritis or deteriorating joints now. 180 to the bone.

Also, during her physical, she reported that she had had a bout with autoimmune iritis about 2 years ago. The doc was stunned. ?That kind of thing doesn’t just go away,? he said. Um, yes it does. She hasn’t had a flare up since we re-united in December of 2008, and her eyes are crystal clear and free of an autoimmune eye disease or any scarring.

Other health changes over the last year of note include a return of her menstrual period, cessation of herpes breakouts, and an overall improvement in her general sense of well-being. The next test will be to see if she can totally overcome her deadly shellfish allergies, which began after eating a low-calorie, uber low-carb diet and running marathons in 2006-2007. There’s no doubt in my mind that she will overcome these. In fact, I believe she already has, as we rubbed some raw shrimp on her wrists and lips a couple months ago without causing irritation.

What caused these amazing changes? Well, it would be hard to pin it on any one single thing, but I feel like the most positive contributors to her improvement in health came from:

1) Sleeping 9+ hours per night, going to be around 8-9pm, for nearly an entire year before her sleep requirement started to decrease.

2) Getting off of oral contraceptives. No one thinking about jaw surgery should be on those.

4) Eating more carbohydrates ? mostly homemade popcorn, vegetables, and fried potatoes as well as overall calories. She eats twice the amount of food that she did during her pre-health problem phase with a third of the exercise. She gained about 15 pounds in the last 17 months, but got to a ceiling weight of about 135. Gaining weight isn’t always a health negative like it is portrayed to be by those with poor comprehension of the whole health picture. A substantial portion of this weight was lean mass as well, and at 5?5?, 135 pounds, she’s still quite thin. More attractive now than before actually.

5) Stopping running. She exercised, but not to excess. She hopes to resume running someday while eating and sleeping better instead of eating mostly eggs, salad, and peanut butter like she did in the past.

6) Ditching peanut butter. She used to eat a couple jars per week.

7) Living with me. Dude, I’m like Jesus. I just touched her and ?poof! All healed.

For anyone thinking of getting jaw surgery, I highly recommend eating a calorically-abundant whole foods diet without severe macronutrient restriction of any kind, lots of sleep, not too much exercise, and cutting out as much refined sugar, white flour, alcohol, caffeine, and medications including oral contraceptives as possible. Of course, this is the basic template for optimizing health for most things. Certainly would make a good pre-conception/pre and postnatal routine.