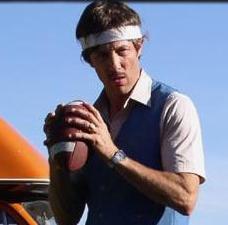 Although the sound quality is less than spectacular – I was in a room full of “moo-shine” filled refrigerators, here is a large chunk of a talk I gave to a local group of real foodies in Sarasota on Tuesday.  Nothing earth-shattering, but unlike Uncle Rico’s flippin’ sweet play action QB video in the movie Napolean Dynamite, it hopefully won’t make you say “this is pretty much the worst video ever made.”

Some of you may recognize the Weston A. Price Foundation reading material on the wall beside me, as this was put on by Sarasota-area WAPF chapter leader Cynthia Calisch.  Topics include metabolism, raising body temperature, overcoming insulin resistance, and the potential benefits of a diet very low in omega 6 polyunsaturated fat.

Please be sure to stir up controversy on my alleged identity as frequent commentor “Chief” based on my chosen attire.

For more on the topics discussed in this talk, such as my dietary and lifestyle strategy devised for raising metabolism, improving insulin sensitivity, and my favortism for saturated over polyunsaturated fat – read THIS FREE EBOOK.

You can also check out:  installment #2 of Chris Sandel’s RRARF experience.

Thanks to Cynthia and all those in attendance!