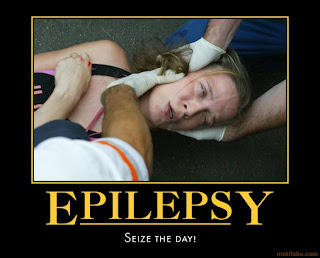 I was going to write about something motherly today, but then I started geeking out major on one of Ray Peat’s articles that I had not read before ? Epilepsy and Progesterone. It’s Mother’s Day-related no doubt, as the only mother I’m helping to celebrate the day with in person suffers severely from the condition ? to the point where she is not legally able to drive, and has never owned a car. Spending the last couple of months with her has provided crystal clear insights into this disease ? and my suspicions, my observations, her past and present experiences, and Peat’s article all match up perfectly in countless ways.

I will cut to the chase, so that any sufferer of epilepsy that arrives at this site will have information that will give them more understanding and assistance with the condition than they have ever received elsewhere ? and give them a roadmap for how to keep the condition at bay to the extent where the brain-damaging drugs used to suppress this disease are no longer required.

For starters, seizures are no doubt caused by a great deal of excitation in the brain. Glutamate and aspartate, as Peat points out in his article, are potent excitants. There is no shortage of hits when you do a search for ?aspartame and epilepsy? on Google either. Of course, the modern diet has been totally infiltrated with lots of sources of free glutamate and aspartate. In fact, these names should ring a bell, as in monosodium glutamate or MSG, and aspartame ? the prevalent sweetener found in Diet Coke and ‘the pink sugar,? as subject A calls it.

Not surprisingly, subject A started having seizures at a young age. When I heard this I immediately thought about her Diet Coke habit. In fact, we teased each other initially as I drank, what to her, was an enormous amount of water. In the past two months I’ve seen her consume one glass of water, a half dozen or so coffees sweetened with ‘the pink sugar? when available, 1 Sprite, and the rest has been Diet Coke. She literally doesn’t drink anything else. 95% of her fluid intake is Diet Coke. I asked her how long she had been drinking it and she said, ?literally as long as I can remember.

Epilepsy treatment #1 ? Remove all sources of aspartame and monosodium glutamate (found, for all practical purposes, in salty-tasting food that you don’t make from scratch yourself) from your diet. These are highly addictive substances, so wean yourself off of them slowly. The stress of withdrawals could also trigger an epileptic episode and/or other health problems.

Peat also discusses the inter-relationships between thyroid hormone, unopposed estrogen, and progesterone like he so typically does when it comes to any topic. He does so because there literally isn’t a common health problem that I’m aware of that, in generalization-speak, doesn’t have some relationship with reduced metabolic activity (which affects progesterone and estrogen and vice versa). Before ever coming across Peat’s work, I had come to this conclusion myself through the study of other authors, scientists, and health professionals.

The clearest way to gauge the health and effectiveness of your thyroid and metabolism is simply to take a body temperature reading. Subject A’s body temperature has always been chronically low, hovering in the 95’s and 96’s.

Epilepsy Treatment #2 ? Follow this program that describes how to speed up your metabolism with diet and lifestyle manipulation. Body temperature rises in the vast majority of cases, and even feeding subject A food for a couple of weeks before she panicked and went back into another round of dieting was enough to bring her warmth levels up tremendously, with substantial loss of edema/water retention (4 pound weight loss in the first 10 days or so with an estimated tripling of caloric intake) ? another one of the hallmarks of seizure-proneness according to Peat…

?Thyroid does many things to protect against seizures. It keeps estrogen and adrenal hormones low, and increases production of progesterone and pregnenolone. It facilitates retention of magnesium and of sodium, and prevents edema in a variety of ways.
~Ray Peat

Of course, dieting is the ultimate immediate threat upon any metabolism, and she has been losing weight for many months by eating fewer than 1,000 calories per day. While fasting keeps her blood sugar relatively stable during the dieting itself, the most dangerous time for triggering seizures has been, without question, after eating a large meal.

When dieting, or after having lost excessive amounts of weight (she is 100 pounds down from her weight at age 19, and minus 30-ish pounds from late last year when she started this anorexic round), glucose metabolism as well as liver function becomes highly impaired. I have yet to come across a single case of a person who is highly underfed that doesn’t enter into a serious state of hypoglycemia after eating a big carbohydrate load (she was asked to leave work yesterday after eating pancakes for breakfast due to rudeness to customers ? after getting home she had a long series of mini seizures). Of course, low blood sugar levels or true hypoglycemia is rare ? but the rapid escalation of the catabolic hormones to bring blood sugar levels back up after sugar levels have been driven down is something I classify as ?hypoglycemia? regardless of what the sugar levels in the blood may be at any given moment.

?Hypoglycemia, in itself, like oxygen deprivation, is enough to cause convulsions.
~Ray Peat

Of course, not eating is not an option, but just as the hypoglycemia worsens with prolonged food deprivation ? the hypoglycemia continually improves with prolonged food surplus. Eat the food, never allowing yourself to get too hungry or shaky or going more than a few hours without at least a little something to snack on. The standard recommendations for hypoglycemics is to eat low-carbohydrate, high-protein diets. In my experience, this is a good way to medicate the condition in the short-term but stay hypoglycemic forever. You can overcome the condition, but it takes consuming lots of carbohydrates to achieve it, and only happens when the health of the metabolism and liver have been repaired through nutritional superabundance. But be careful to have abundant food supplies on hand to eat immediately when symptoms of hypoglycemia start to emerge. It’s certainly a good idea to overcome hypoglycemia before you even think about weaning yourself off of medication.

To me it has always been obvious that hypoglycemia and impaired glucose metabolism is a frequent trigger of seizures, as one common dietary approach that has been used with success has been the ketogenic diet. Ketones provide an alternate fuel source that evades the perils of riding the blood glucose rollercoaster that comes when someone with impaired glucose metabolism repeatedly ingests large loads of carbohydrates. But that doesn’t mean that the ketogenic diet is the right way or the ultimate way. Walking will indeed get you from Los Angeles to New York, but that doesn’t mean that walking is now the answer for travel and all other traveling methods are to be excluded. In reality, the ketogenic diet as it is prescribed to epileptics (85% of calories from fat) is extremely unhealthy, often leading to other health problems, mineral deficiencies, etc. Plus it sucks.

Epilepsy Treatment #3 ? Eat plenty of food. Never diet or make overly drastic restrictions in carbohydrates, fats, and so forth (of course, there is room to tinker with ratios somewhat). Don’t diet, regardless of how much you weigh. Dieting has been proven to be ineffective for long-term weight loss for the majority of people, and repeatedly leads to higher rates of illnesses such as type 2 diabetes, heart disease, and ?minor? health problems (which would include epilepsy).

Subject A has repeatedly mentioned that stress ? whether emotional or from sleep loss or otherwise has been the obvious trigger of most of her seizures throughout the quarter century that she has suffered from the condition. A good friend of hers that had epilepsy died on the track from a grand mal seizure after placing third in a running event.

?Seizures can be caused by lack of glucose, lack of oxygen, vitamin B6 deficiency, and magnesium deficiency. They are more likely to occur during the night, during puberty, premenstrually, during pregnancy, during the first year of life, and can be triggered by hyperventilation, running, strong emotions, or unusual sensory stimulation.

Epilepsy Treatment #4 ? Be wary of stressful situations, and use things that are under your control to mitigate stress ? most notably avoiding alcohol and drugs, getting plenty of sleep, avoiding overly strenuous exercise, having a regular bedtime that you adhere to closely, and using food as an anti-stress tool by eating plenty of food, plenty of carbohydrates, and very frequently.

Ray Peat also feels like free radical production plays a role in seizures as well. Of course, any stress (like a hard run) can trigger a free radical cascade. This is compounded by Ray Peat’s primary dietary villain, polyunsaturated fat. Polyunsaturated fat oxidizes more readily both outside and inside our bodies. Sure enough, some of subject A’s favorite foods have historically been very high in polyunsaturated fat? chips (she said there was always a whole cabinet full of chips ? which she was particularly drawn to ? probably because of her intuitive liking for salt which would make sense), peanut butter, fatty commercial pork (ribs, sausage and gravy), and she has eaten a great deal of restaurant and processed food in general throughout her life. She hates cooking with a passion.

Epilepsy Treatment #5 ? Eat a diet low in polyunsaturated fat and high in saturated fat instead, which Peat strongly feels is protective against free radicals. Coconut oil is the best cooking oil. Butter, cream, and other full fat dairy products are good options for making food rich and palatable. Beef and fish are better choices than pork and poultry. Most nuts and seeds, with the exception of macadamia nuts, are too high in polyunsaturated fat to eat in large quantities ? although another Peat paradox emerges here, as nuts and seeds are the highest sources of vitamin E, perhaps the most protective nutrient against free radicals.

Epilepsy Treatment #6 ? As Peat suggests, diet and lifestyle manipulation may not be sufficient to raise thyroid and progesterone enough to be protected. You may need to supplement with these hormones if you cannot manage the disease otherwise. But according to Peat, supplementing these can be highly effective.

This all may not sound like rocket science, but do not underestimate the power of keeping the body in a state of balance and optimal functioning ? which means a high cellular metabolic rate, low levels of the stress hormones, and the resulting balanced levels of sodium, potassium, magnesium, calcium, urea, and other elements linked to seizures that are all positively impacted by these important hormonal alterations.

More information on all of these provisions can be found in this ?book on how to boost your metabolism.

Oh yeah, and eat plenty of salt. Subject A seems to think that sodium is bad for you and tries to avoid eating it even though she likes salty foods. Oops. I made some homemade fried chicken (polyunsaturated fat OMG! ? don’t worry it was fried in coconut oil) last night that was so salty I could barely eat it. She slept like the money and is feeling the best she has in a week or longer today.

And, since it’s?Mother’s?Day…especially if your mother is epileptic, treat her right…