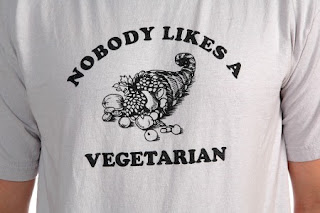 ?Vegetarians often notice temporary exhilaration when they stop eating meat, probably because their thyroid has been suppressed. But a more serious hypothyroid state often follows, from a low protein inadequate vegetarian diet. Low protein diets definitely interfere with the liver’s ability to detoxify estrogen and other stressors.


?A few years ago, most of the nutritional problems that I saw were caused by physicians, by refined convenience foods, and by poverty. Recently, most of the problems seem to be caused by badly designed vegetarian diets, or by acceptance of the idea that 40 grams of protein per day is sufficient. The liver and other organs deteriorate rapidly on low-protein diets. Observe the faces of the wheat-grass promoters, the millet-eaters, and the ?anti-mucus? dieters, and other low-protein people. Do they look old for their age??
~Ray Peat

I don’t sense that Ray Peat has much love for vegetarian diets. While I would never want to outright say that eating a predominantly vegetarian diet that contains at least occasional consumption of meat, seafood, dairy, and eggs is harmful ? as this might create fear of eating this way in someone that stands to improve their health tremendously on such a regimen (this seems like a great therapeutic diet for a long-time low-carber, and I’m pretty certain I could thrive on this type of diet), there’s no question that many of the vegetarian diets being followed by today’s young and na’ve, morally-delusional, and environmentally-confused health enthusiasts is extremely treacherous.

Throughout my research I see the theme repeated that protein is suppressive to the metabolic rate (and protein restriction supposedly can trigger increases in thermogenesis ? but perhaps this is just a short-term effect from the spike in catabolic hormones similar to taking amphetamines, which would explain the vegetarian’s short-term feeling of ?exhilaration?) ? and this is coming from those who are more honed in on metabolic rate than any in history ? such as Peat himself and Broda Barnes.

In particularly, animal protein seems to have this effect more than any other. I used to just assume it was total protein, but it appears that certain amino acids in particular have that effect, notably cysteine, methionine, and tryptophan. A big portion of Peat’s work revolves around these amino acids, and obtaining ample protein without taking in excesses of these particular amino acids ? or at the very least balancing them out with anti-inflammatory amino acids that are not a drain on the metabolic rate by consuming a considerable amount of protein in the form of fruit, juice, potatoes, and gelatin.

This is quite an interesting finding. If it is indeed true that these amino acids ? despite perhaps being incredibly vital during growth and development as they help to build lean tissue (particularly in things like, whey protein and egg whites ? the staples of body builders looking to add muscle), have an anti-metabolic effect?

Then it would tie several theories and observations together. For one, it’s safe to say, as a generalization, that Americans consume the highest ratio of muscle meat to gelatin (from collagen, skin, bone, and broth ? many of which have been deleted from the diet with the selection of more tender meats and stigmas against the non-muscle parts of the animal that do not contain nearly as much of the anti-metabolic amino acids). So the observation that America, more so than most countries, is richer in health problems related to subdued metabolic rate ? such as type 2 diabetes, heart disease, cancer, autoimmune disease, constipation and the digestive problems that stem from it, infertility, and so forth does not contradict this.

We also see many reports of the supposed superiority of a ?plant-based diet? when it comes to longevity and what not. While this is highly debatable, that general belief is quite prevalent.

An even bigger stimulator of debate, the world famous China Study findings were reported as being that animal protein had strong associations with degenerative disease while plant proteins did not. There’s no telling why this observation was made (or how much the data was falsified and taken out of context by Campbell), or if it really did have something to do with the fact that plant proteins, generally-speaking, are lower in Peat’s evil 3 amino acids ? particularly methionine and cysteine. For example, the areas with the greatest meat consumption could have easily been the largest people (a theme observed by explorers like Weston A. Price or Robert McCarrison) ? which as we’ve discussed recently isn’t necessarily a life extension trait. In fact, I highly suspect that reduced body size is probably the reason that calorie restriction used in laboratory animals at birth does extend the lifespan (just like small dogs outliving big dogs, a parallel made by the great Peat himself). It obviously isn’t the reduction of calories alone, as reducing calories in adult laboratory animals causes early death?

Anyway, the point being is that we don’t know if the findings of the China Study really did have something directly to do with the amino acids methionine, cysteine, and tryptophan. It could have been stunted growth from insufficient protein intake, calorie restriction from the areas with low meat consumption generally being the poorer areas, or some other factor altogether ? like meat consumption increasing the farther North you go in the country ? distance from the equator appears to be a risk factor for many health conditions (multiple sclerosis, depression, etc.). But the finding that animal protein increased morbidity and mortality rates matches up with Peat’s theories.

This ties in well to Kilmer McCully’s homocysteine theory as well, (discussed in THIS post and THIS post)’showing that, in a circumstance of B-vitamin deficiencies, methionine, found in highest concentrations in animal protein, is not metabolized correctly (disturbances in the ?methylation cycle? which can cause an accumulation of homocysteine ? a highly-inflammatory substance with strong ties to heart disease and other conditions). The perfect nutritional storm for creating high levels of homocysteine is eating a ton of animal protein with a bunch of refined carbohydrates that have been stripped of their B-vitamins. This is, of course, the American diet in a nutshell ? the home of skinless chicken breasts, egg white omelets, low-fat cheese, skim milk, protein powders and bars, and the world’s most impressive refined sugar consumption (the zero nutrient food).

And finally, if these amino acids in excess really do cause additional inflammation and lower the metabolism, you’ll have trouble finding a disease out there that isn’t somehow linked to reduced cellular energy production (i.e. lowered metabolic rate on a per cell basis), overproduction of inflammation, or both.

What is strange about all this is Peat’s solution ? or rather how it translates to his blanket dietary prescription. You can read from the second quote that Peat is a big advocate of a relatively high protein diet. Then he points out the dangers of consuming excess animal protein. He also bashes the consumption of legumes, grains, nuts, and seeds ? the highest sources of protein in the plant kingdom that are so fabulously low in most of the three inflammatory, anti-metabolic amino acids (an exception might be, peanuts, which contain lots of tryptophan). Of course, eating more legumes, grains, nuts, and seeds instead of animal protein has long been the solution offered up, and are the standbys of your typical vegetarian that Peat criticizes?

?Besides fasting, or chronic protein deficiency, the common causes of hypothyroidism are excessive stress or ?aerobic? (i.e. anaerobic) exercise, and diets containing beans, lentils, nuts, unsaturated fats (including carotene), and undercooked broccoli, cauliflower, cabbage, or mustard greens. Many health conscious people become hypothyroid with a synergistic program of undercooked vegetables, legumes instead of animal proteins, oils instead of butter, carotene instead of vitamin A, and breathless exercise instead of a stimulating life.

And thus enters what is always the biggest problem that I have with Peat’s work and general recommendations ? on protein, with exercise which we will discuss later in the month, and in general. All foods have both positive and negative attributes.

Specific to protein, Peat recommends getting lots of protein from eggs, lean fish, shellfish, and dairy primarily ? balanced by fruit and gelatin. Yet, these foods contain massive amounts of tryptophan, methionine, and cysteine. Anyone else reviewing the protein issue would steer someone towards eating a more moderate amount of protein, and eating more starchy foods high in protein (like grains, root vegetables, nuts, seeds, and legumes). He recommends these foods because they are apparently more ?balanced? and the nutritional quality of these foods is superior to muscle meats.

But you are still left with a catch-22 and a huge unanswerable question? will the amino acids in animal proteins lower your metabolism and cause more inflammation? Or will the lectins and anti-nutrients in legumes and grains lower your metabolism and cause you more inflammation? No one knows. Peat seems to justify this based on the idea that estrogen is anti-metabolic in excess, and eating lots of phytoestrogens in beans and not taking in much protein will compound the estrogenic effects of the diet. But in reality we are left not knowing what the hell to eat based on these theories. It is confused even more by the fact that increasing the carbohydrate intake of the diet by eating lots of grains, tubers, and fruit has a massive protein-sparing effect, lowering one’s protein needs substantially. But we can’t just not eat much protein Peat tells us. This will cause your organs to ?deteriorate rapidly? according to him.

Of course, all those health food store vegetarians that Peat is taking swings at are busy eating high-fiber, unapalatable food often low in fat. The result is a huge spontaneous reduction in calorie intake and a rapid acceleration of the aging process that stems from calorie reduction ? certainly increasing the rate of aging of the skin and making the face look wrinkled and old (not to mention the energy-drained and apathetic health food store workers always look like they could use a massive caloric kick in the ass ? even when they are pounding cacao by the truck-full). This video by high-calorie advocate Durianrider of this health food store blooper-hero eating 1,200 calories per day or something like that is exactly what I’m talking about?

Anyway, it’s an interesting conversation piece. If you get anything from Peat on this issue that stands firm with the greatest potential value, it’s that it might be of tremendous health benefit to add gelatin to your diet in the form of broths, bone-in roasts, whole roasted birds instead of grilled breasts, stews and slow roasts made with meats that are terribly sinewy and tough, and some of Peat’s favorites ? gelatin powder added to juice and soups, gummi bears, marshmallows, panna cotta, and Jello (margarita flavor, snorted through the nose like 80’s movie character Charles De Mar or slurped off a willing Oregon State Beaver student on Cinco de Mayo).

I haven’t really tried it with any dedication myself. I prefer to just eat a lot of fruits, juice, starches, and calories to not only get my protein, but lower my protein requirements with the protein-sparing effect of calories and carbohydrates. Sure, I eat plenty of meat and dairy too, but certainly not the absurd 8-ounce portions X 3 times per day that I used to eat to the detriment of my health.

And Ray May continues. We’ll be revisiting the protein issue throughout I’m sure?

For more, read on how to??RAISE YOUR METABOLISM.