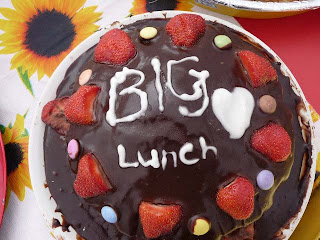 One of the simplest aspects of the RBTI – and one of the most powerful, is eating a big lunch – the meal of the day when you eat the most fat, the only meal that you eat meat (not including eggs and dairy), and the last time during the day that you eat sweets or desserts.
Seems that people are daunted by this whole RBTI thing, but, as Challen says?matter of factly – “the more rules that you follow the healthier you will become.”? Well,?I’m?finding that just following this?ONE rule?- eating big?every day and finishing up the meal?no later than 2pm, is helping a lot of people. It’s very simple. No meats or sweets after 2pm. Dinners are very light – typically small salads, steamed vegetables, cottage cheese, soups, and a little starchy food on occasion like 2 pieces of toast or last night’s?corn on the cob with sauteed veggies. It may sound difficult, and you may be hungry as hell for the first week, but I?really think it’s worth making the adjustment’to reap the rewards.
I also think it’s vastly superior to’typical intermittent fasting or eating super light early in the day because the danger of hypoglycemia during that time is very high -whereas the sugar levels rise the highest in the late evening, making hypoglycemia and the heavy taxation on your adrenal glands’that you might get from morning?fasting a non-issue. Bottom line – it works well for a lot of people. More energy, better sleep, better blood sugar regulation, better appetite regulation, and fat loss eating to appetite – even if you eat ice cream?or cheesecake at lunch of every day (as a normal-sized?dessert – not as your whole meal)…
P.S. – Pippa and I are leaving for our New York/New Jersey tour tomorrow. For those interested, Pippa will be charging $150 for a visit to your house or office – which will include running the RBTI test, calling Challen to get feedback about your chemistry, going over every detail you would need to follow the program – including the specifics for your chemistry, and answering any of the questions and concerns you may have. You can have other friends and family members tested for only an additional $25 per person. Once again, you can contact her at pipparoni@yahoo.com to set up an appointment. Plus you get to see me and hear me make?jokes about pee and stuff.?You don’t wanna miss that.
How to RAISE YOUR METABOLISM.