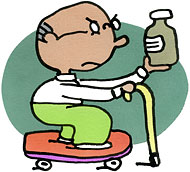 Tomorrow I leaveth the WHIZard and the wonderful paradise city of Wheeling. At least for a few months. I have spent a total of four weeks here and about six weeks on Waychoff’s basic program at this point – with decent but not perfect adherence due to some chaotic road trips.

My body chemistry has moved much closer to Reams’s theoretical ideal. And I can honestly say I’ve noticed improvement in all the areas I was having troubles with upon arrival – from improvements in foot pain, chest pain, and back pain to a huge decrease in pet allergies and asthma. My teeth feel noticeably stronger – kind of like what I felt on my extended milk fast over a year ago (which made the other problems listed exponentially worse in exchange for those healthier teeth). My breathing has improved and I no longer wake up with crusties in my nose that used to make me sneeze all morning long. My skin is clear. And I’ve lost an inch or two off the waist eating to appetite with no physical activity. I can’t argue with those results. And it wasn’t exactly torture choking down that coconut cream pie at lunch today. Or those waffles smeared with cream cheese and jam at breakfast.

That doesn’t mean Waychoff is God. He isn’t. Or that RBTI is foolproof. I don’t think it is. Even some that have followed his advice for a decade still have major health struggles (granted, those folks would probably be dead if it weren’t for Waychoff’s guidance).

As wacky as it is, very little doubt remains that RBTI, as Challen Waychoff practices it, at the very least deserves a prominent place in the world of alternative health. I’d put it up against any of the popular alternative health modalities, such as Acupuncture, homeopathy, chiropractic, etc. any day of the week. I’ve tried all those, and none of them lived up to my experiences with RBTI thus far. It is a shame that you can find a practitioner in those fields in every town in America, and only Wheeling, West Virginia – yes WHEELING, WEST VIRGINIA, has a licensed professional doing RBTI as Waychoff practices it. I hope my expos? of the WHIZard is the initial spark to change that.

I can’t possibly be the only one that responds well to it. In fact I know I’m not. I’ve talked to several dozen of Waychoff’s clients that report success varying from pretty good to miraculous. My own sister was able to wave goodbye to heart arrhythmia and hypertension after a couple of weeks of loose adherence. My father sent me a text message featuring the word “bonerville.” Like pops, I can’t help but have a little excitement here.

Anyway, I still have much more video and my own personal thoughts to share about my RBTI “experiment” and research. Only time will tell what the uses and limitations of it really are. But anywho, here’s yet another clip of Challen that features a very basic concept central to RBTI…