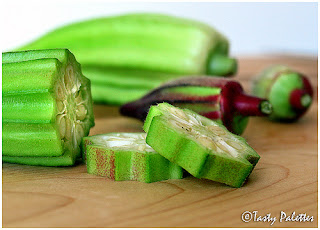 Okra, a green (and sometimes reddish)’vegetable with starchy, slimy’seeds on the inside, is one of the most adored and hated of all vegetables in the United States. It has a true cult following. Those that love okra really LOVE okra. When I lived in Colorado, few growers produced it and it was rarely if?ever available at supermarkets. It was a dogfight to get the okra every farmer’s?market Wednesday between?me?and?a handful of other people in the area that knew what the heck okra was?and what to do with it.

Anyway,?I’m in the okra love?category. Others can’t stand the funky texture, which is great. More okra for me.

Traditional ways to cook okra are in cajun gumbo or any kind of seafood or fish stew. Okra, because of its starchiness, makes any broth it is cooked in thicker and almost gelatinous. I can’t get enough of it in such a format. It gives broth an incredible silky mouthfeel like nothing else can. Aside from pickling, it is rolled in cornmeal and deep fried, the most common way you’ll see okra served up in the Southern U.S. where okra is most popular.

But even just sauteed up with a little spring onion and some salt and red pepper flakes like shown in the video?is enough to made a?really’tasty vegetable side dish. It’s also?great with breakfast potatoes and scrambled with eggs and tortillas – the preparation that made me really fall in love with okra (see the “Chilaquiles” recipe in the 180 Kitchen eBook). Anyway, I hope my redneck voice impresses?Johnny Lawrence.?Impressing him is?all I really?care about.