Serotonin and the Carbohydrate to Protein Ratio 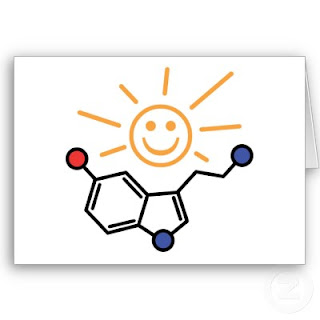 There is always some war going on against a certain hormone or biochemical. The most common of course is probably cholesterol, which plays many essential roles in the body that you will die without. Another of course is insulin, yet another hormone that low-carb gurus have gone to war against and tried to pin every known disease to. Estrogen also comes to mind, as does cortisol.

One concept I’ve always appreciated, and that I thought distinguished authors like Barry Sears and Diana Schwarzbein from either low-fat or low-carb dogma was insisting that the RIGHT amount of our essential hormones and biochemicals is the great secret to the best health a person can achieve.

Sears developed what he calls the Zone. This zone is a place where insulin and its counter-hormone glucagon exist in balance. To manipulate this balance, you focus on the ratio of carbohydrate to protein. Sears, without any real basis, established this at 1.5 to 1. Schwarzbein is more flexible and takes other factors into account, but is very blunt about never going below about a?1:1 ratio ?no matter who you are or what you think? and suggests that a 2:1 ratio is probably ideal if one had to choose.

The reason I bring this up is simple. Along with this carbohydrate to protein ratio which has a big impact on the insulin to glucagon ratio, you also have various neurotransmitters associated with that as well.

In an insulin-dominant state, your serotonin tends to rise in proportion to’the drop in?adrenal hormone activity. You could call this the fed state, and it is characterized by feeling full, calm, at ease, and relaxed ? even sleepy when you really eat a big meal. When you are in a glucagon-dominated state (glucagon is hormone that is secreted to raise blood sugar, unlike insulin which does the opposite) your adrenal hormones by definition are active. This happens when no food is available, typically several hours after you’ve eaten. You hear reports of extreme mental focus and energy amongst intermittent fasters during their fast. Yes. This is because insulin is low, and glucagon and therefore the adrenal hormones are working overtime.

I too experienced this with my initial entryway into a low-carb diet. A low-carb diet (low carbohydrate to protein ratio), quite simply, lowers insulin and raises the catecholamines that give you energy and mental focus. I just couldn’t believe how I could go and go and go all day and NEVER feel drowsy or hungry. It was remarkable.

But after enough time passed, the dark cloud started moving in. I couldn’t sleep. I developed dark circles under my eyes. My sex drive decreased and other ominous signs. But worst of all, my mood became atrocious. Normally a lax, easygoing kinda guy, I reverted to behavior I had in my youth ? a temper like the Tazmanian Devil.

After going low-carb long enough my temper became outrageous. Some little idea would set me off and I’d stay up all night sweating in furious anger and fantasizing about inflicting harm to ?x? thing or person that I was obsessing over.

But within 24 hours of embracing carbohydrates fully, that disappeared completely. No more sleepless nights. No more dark circles. No more irrational anger. And the sleep. Good lord did I sleep. And I too, like many others, experienced major fatigue after meals for the first 1-2 weeks. The happiness was blissful. I lived up to my nickname of ?Stoner,? with a constant smile on my face, a sensation of deep peace and relaxation, and my eyelids half closed.

Anyway, the point of this post is to be mindful of your carbohydrate to protein ratio. Personally, I don’t believe that there is one magic ratio. Rather, I think this ratio can be exploited to do remarkable things ??like give yourself great energy and focus during the day and amazing sleep at night, simply by tweaking this ratio at certain times. Not only that, but you can use this ratio to determine what puts you in the good mood, no-cravings, stable energy ?zone? throughout the day.

Too many carbs in relation to protein and you have too much serotonin and you feel sluggish and unproductive. Too little carbs and you feel anxious, jittery, nervous, and quick to anger. A big hit of ice cream or alcohol and you’ll send your serotonin on a wild roller coaster and are destined to be out of optimal emotional balance. Even keel is the goal.

This concept was brought up months ago by JT and others. That idea was simply to eat more protein early in the day and less at night. This makes even more sense when you scrutinize our circadian rhythms (next post will be on resetting those rhythms), and how those with metabolic issues and obesity almost ALWAYS have the circadian rhythms backwards ? waking up feeling tired and not hungry (low cortisol, high serotonin), and going to bed hungry (craving calorie-dense sugary foods, white flour products, and alcohol specifically) and not tired (high cortisol, low serotonin). This can mostly be attributed to, I believe, the delicate balance between serotonin and cortisol ? which is impacted most heavily by the carbohydrate to protein ratio of the last meal you ate, as well as calorie intake. 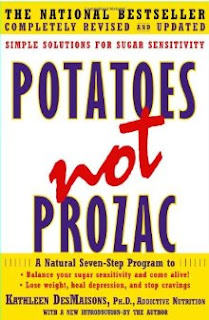 Of course, the whole concept behind Kathleen DesMaisons’s program for overcoming addiction as discussed in Potatoes Not Prozac is eating starch, WITHOUT accompanying protein (a few bites of a baked potato)?before bedtime to assist in getting tryptophan across the blood-brain barrier where it is converted to serotonin, then melatonin ? helping you fall asleep, have incredible dreams (you wouldn’t believe what Tom Skerritt was wearing last night!), and overcome addiction. I think this practice goes way beyond just addressing addiction though.

Also it’s important to note that your body and brain have a remarkable ability to adjust. For example, when I started eating very high-carb/low-protein (about a 5:1 ratio) in June, my sleep was incredible at first. However, the longer I continued at this constant level, the more carbs and the less protein it took for me to be able to get a good night’s sleep. Protein just became too energizing and carbs became increasingly less relaxing/calming.

But the last couple of weeks I’ve fine-tuned it and discovered that it’s very easy to get the best of both worlds ? energizing protein early in the day and calming carbs at night. I’m not talking about extremes of carb cycling here either ? just going from say roughly a 2:1 ratio at breakfast and lunch to a 4:1 ratio at dinner.

This is really an interesting self-experiment to try for yourself if you are curious about the power that minor changes in meal composition have over mood, energy levels, sleep quality, and more.