About a month ago we were having a big nerdfest about the role of dopamine in weight set point and what Seth Roberts calls the ?Flavor-Calorie Theory? of obesity ? or what I have started calling, because my coolness rating is so much higher than Seth’s, PCAT (Pleasure Center Activation Theory). But dopamine is only one of the pleasure neurotransmitters that is involved in the human sensation of pleasure ? another is serotonin. And weight is only one thing that is potentially influenced by these reward chemicals.

Here is another connection for you. 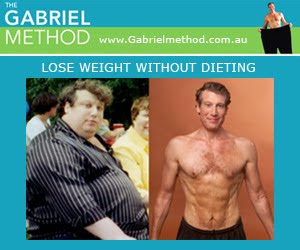 Author Jon Gabriel in his book, The Gabriel Method, discusses how pivotal emotions are to weight set point specifically. Negative feelings about your weight or body image are very central to weight problems, and take a small problem and blow it up into a big one in a vicious cycle. Other emotions such as anxiety, guilt, stress, sorrow, worry, and fear may often play a central role as well.

Gabriel loves to reflect upon the work environment that he was in when his weight was the highest ? and how he lived in a constant state of unease around his moody and hot-tempered?colleague who I envision treating the office copy machine like the character Michael Bolton in the movie Office Space. In videos he laughs at how he (Jon Gabriel) would always be on some kind of diet while weighing in at nearly 400 pounds? one week he?d ?be eating the burger without the bun and the next week be eating the bun without the burger.
His business partner, however, would order something like a chocolate milkshake for lunch, would have a few sips of it, and then just throw the rest out ? while Gabriel would be starving and could hardly take his eyes off the milkshake. He just wasn’t interested in the milkshake, and kept losing and losing and losing weight while Gabriel gained weight in the same stressful work environment.

But Gabriel, interestingly, would internalize all of the problems at work and all the stress, whereas his colleague would scream and shout and throw things and then move on. He talks about all this?beginning at?6:00 in this video (and at around 2 minutes in he discusses acute vs. chronic stress?in terms of exercise?which is discussed at the bottom of this post)… 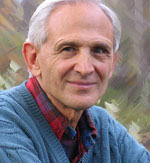 This theme is repeated throughout Peter Levine’s book on emotional and physical trauma entitled Waking the Tiger. Those who remain active during traumatic situations manage to dissipate the trauma and have very little lasting post-traumatic stress. It’s those that internalize the trauma and shut down physically and mentally that have this trauma stored in the body where it resides, causing disease and distress, on a long-term basis which is far more harmful.

I came across this theme again recently while reading Shawn Talbott’s excellent book, The Cortisol Connection. The concept is simple really. There is acute stress, and there is chronic stress ? and how difficult and traumatic situations are dealt with makes a huge difference in the outcome as regards your health, well-being, and waist measurement. 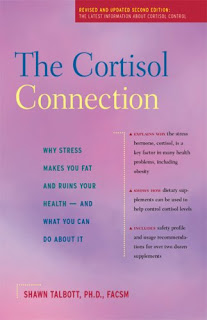 This is because these negative emotional states induce a release of cortisol. Actually, a more accurate depiction of what happens is that negative emotional states ramp up the activity of 11-HSD-1, an enzyme in cells (particularly centered around the abdomen) that, for lack of a better description, helps cells utilize a larger percentage of the cortisol coursing through the body at any given time.

In other words blood levels = normal. Actual functional cortisol = high, as this intracellular cortisol cannot be measured via normal blood or saliva tests, which are, like thyroid hormone panels, only useful in cases of extreme abnormality (like Talbott says, if you actually have truly abnormal levels of cortisol, you’re lucky to be able to get out of bed in the morning). Huge and unpredictable fluctuations throughout the day in terms of cortisol in the bloodstream complicate the usefulness of testing even further.

Anyway, you can now clearly see why substances that spike neurotransmitters to unnatural highs can lead to an increase in weight set point. Spike serotonin into the stratosphere using foods with extreme sweetness, unnaturally high calorie density, and rapid absorption rates ? or by using psychoactive drugs like alcohol that induces a massive pleasure response, and you do witness downregulation of receptor sites (closure).

The result is that these things send you on an emotional roller coaster ride in which you feel extremely good immediately after consuming these highly-pleasurable things, but then exist in a low-pleasure state the entire time that you are not on one of these substances – depicted very well in Kathleen DesMaisons’short video HERE?(sugar ? particularly the fat-sugar combo, no-calorie sweeteners, alcohol, drugs, white bread, etc.). This results in chronic, low-grade negative emotional states of stress, depression, anxiety, fear, guilt, worry, an inability to shake off painful past experiences, and a tendency to see the worst in the people, places, and things that you interact with in life.

And it’s this chronic, perpetual, low-grade level of psychological malaise that leads to real problems with your cells drowning in a steady flow of cortisol and the manifestation of metabolic disease, frequent infection (cortisol suppresses the immune system), autoimmune disease, allergy/asthma, and so on.

After all, it is cortisol (along with other counter-inflammatory molecules such as SOCS-3 as discussed in the video below) that blocks the action of leptin and insulin ? causing leptin and insulin resistance. This, in turn, leads to lowered testosterone, reduced metabolism, impaired immunity, hyperinsulinemia, impaired glucose tolerance, increased appetite (although your appetite is a lesser factor if you are eating to get a serotonin and/or dopamine high), and so on. Chronic emotional stress, chronic physical’stress in the form of diet and overexercising, and excess tissue composition of omega 6 and other causes of inflammation all contribute to this effect.

The take-home message from this initial serotonin post is simple though. There are foods and substances (all of them with a drug-like quality due to the influence they exert upon the pleasure centers in our brains) that cause chronic low serotonin levels (via receptor closure) of which chronic high cortisol levels is the counter-result. In this way, the vast spectrum of negative moods, if they are chronic, lead to chronic problems with infectious and degenerative illness including weight problems. When you eat to keep pleasure centers as stable as possible, which will be discussed at great length in this series of posts, it is almost impossible to trigger irrationally-negative emotional states ? and the response to stressful and traumatic situations is infinitely enhanced and doesn’t weigh on you for days and weeks like it would someone in a chronic low serotonin state.

In a sense, chronic stress and acute stress are polar opposites, which is an excellent tie-in to the continued conversation we’ve been having on exercise ? from a metabolic standpoint, it appears that short-duration, high-intensity exercise improves the stress response ? sending it in the acute direction. This is, of course, the exact type of exercise Jon Gabriel recommends as the exercise component of his program. Long-duration exercise appears to be more of a chronic stress, which can easily be observed in the difference in body type between an endurance athlete with a characteristic low-testosterone/high-cortisol profile (low muscle mass, gains fat easily when sedentary) compared to a high-performance/short-duration athlete (high muscle mass to body fat ratio ? high testosterone to cortisol ratio).

Stay tuned for more in this series, including how to reset your cortisol clock and stress response, serotonin’s role in our circadian rhythms, serotonin’s role in sleep quality, appetite, cravings, and energy levels, the carbohydrate to protein ratio and how it impacts serotonin, emotional eating, how to potentially keep your serotonin receptor sites from upregulating when eating a diet that keeps serotonin on an even keel, and for more read my eBook DIET RECOVERY.