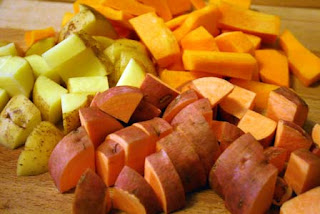 ?It is of interest that diets high in fibre-rich cereals and tuberous vegetables tend to result in an improvement in basal blood glucoses.

It is a common belief that starch, or any type of carbohydrate – particularly high-glycemic starches like potatoes, raises insulin. In the low-carb circles you see the idea floating around that carbohydrate ingestion raises glucose, which in turn raises insulin. Insulin increases fat storage, therefore carbohydrates make you fat and are the cause of the obesity epidemic.

Gross oversimplifications that the human mind can easily grasp are always popular – regardless of the what the oversimplifications are?intended to explain. In the health sphere, they are prevalent. The carbs?= insulin = fat myth is one of the greatest and most easily refutable. It’s up there with the great fat = cholesterol?= clogged arteries = heart attack theory that is simple, easy to follow, makes sense to those who?don’t study it, and is completely silly?and a total misrepresentation of the etiology of heart disease.

As always, it depends on context. In my program designed to, among other things, restore insulin sensitivity (which it has in every case I’m?aware of – shown by increased glucose clearance out of the blood after eating), I do not say “eat starch and you will live happily ever after.”

Instead, I say something like… “Eat plenty of food, don’t overexert yourself physically or mentally, get plenty?of’sleep, eat only saturated fats and keep omega 6?polyunsaturated fat ingestion to a minimum, get sufficient but not excessive?amounts of quality protein,?and eat plenty of high-glycemic’starch at every meal.”

This?generally lowers the activity of the sympathetic nervous system, increases thyroid activity, improves glycogen storage, and starts shuttling glucose from ingested food into muscle cells where it creates muscle growth and the generation of heat and energy. This reduces insulin resistance. If you are insulin resistant and have high?fasting insulin levels as a result of this insulin resistance, then insulin levels will fall dramatically on this program. For example,?below is an email sent to me by someone who has followed 180DegreeHealth for over?a year now.

A’traumatic childhood stress caused this person to suddenly?become insulin resistant (as chronic stress hormone secretion is the primary root cause of insulin resistance) and gain something like 60 pounds in a year if I recall correctly from our?email exchanges. She has had blood sugar regulation and thyroid problems ever since, which she tried to medicate with a?low-carbohydrate diet to varying degress of restriction.

She has spent the last?four years on a low-carbohdyrate diet, and her fasting insulin levels have?varied between a?VERY high?14 and 33 IU/m. But after just four months of loosely following my program to increase metabolism with special attention to eating high-starch and low-PUFA, her insulin has fallen all the way down to a perfect 4.7 IU/m. Her?fasting glucose has fallen nearly in half to a level that probably scared the?doc into thinking (mistakenly) that’she was?about to fall into a hypoglycemic coma (yet she?no longer experiences high-adrenaline states indicative of crashing glucose levels like she did on a carbohydrate-restricted diet).
If I am not mistaken she did not lose a single pound of body weight during this time, so any drop in insulin cannot be attributed to weight loss or calorie restriction. Her calorie intake has not dropped at all.?Following is the email she sent me…

“Just got some labs back and thought I’d share them with you.

I am still low in iron, which is surprising to me considering I eat red meat, but I think the high RT3 and celiac disease all play a part in this.

On the other hand I am quite pleased with my blood sugars and insulin levels.
For reference here are my PRIOR glucose and insulin labs:
October 2009:

**Not quite sure why my HBA1C isn’t in the optimal <5.4 range if glucose and insulin are so excellent. HBA1C is an average of blood sugars over a three month period though, so the HBA1C may be lagging behind in terms of including blood sugars from the first few months of RRARF when my blood sugars were a lot higher than they are now.

If you are still under the influence of low-carb dogma, and believe that eating carbohydrates will raise your insulin levels, snap out of it. In the right context, carbs are your best metabolic friend, and what passes as science and physiology in the low-carb realm is?a complete scientific fairy tale.