Email
And so it is revealed, my girlfriend’s very clever Halloween costume idea ? Swine Flew. No, you won’t catch me getting vaccinated. Sleep well, eat well, spend some time on your feet out in the sun ? and you’ve got little to worry about. Then you can make fun of the paranoid mask-wearers and H1N1 vaccine-beggars  and the Pepsi-guzzling chip eaters that actually get this disease and have trouble shaking it off. 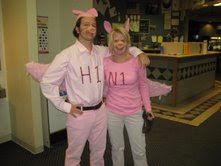 ?When pigeons fed on [a nutrient-deficient diet] were congregated together, the organism (bacillus suipestifer) spread to every one of them, causing polyneuritis and death? The control birds, on the other hand, similarly confined in one large cage and equally exposed to infection, almost completely escaped its effects ? only one out of 24 dying in consequence of it. While, therefore, the deficient food greatly favoured the spread of the organism, good food hindered its spread as effectually as did segregation or immunization.