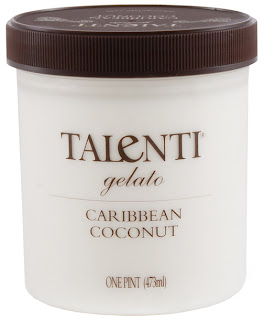 Truth be told, I’m not totally on board the Haagen-Dazs train when it comes to the ?healthiest? or ?cleanest? commercial ice creams. I spent three years eating a diet with an astronomical amount of fat ? typically 300 grams of fat per day ? much of it from cream, milk, and butter. I didn’t even get a t-shirt for this great feat of human extremism, which is unfortunate because my body odor was so strong on this diet I could have used a few extra shirts.

So when it comes to eating ice cream, I’m not in search of the richest, most fatty ice cream even if there are only 5 simple ingredients ? milk, cream, eggs, sugar, and vanilla like that found in Haagen-Dazs vanilla. If I want to feel good (better, faster, harder, stronger) I eat more carbohydrate ? only eating enough fat to keep calories high, the food palatable, and my mood solid.

So when I look for ice cream, I like something with more sugar and less fat. This is precisely what Gelato is, and stores nationwide are now selling Talenti Gelato which I greatly prefer over Haagen Dazs for my own physiology and lifestyle demands.

Now before you nutrazis cringe in disgust at my dietary lenience, please understand that, at the end of the day, I am now starting to believe that one could rehabilitate their metabolism with ice cream just as effectively, if not more effectively, than without it. If I had to cast all my beliefs aside and pick one food that unanimously causes more heat generation, and a warm buzz of heat that radiates out to the fingers and toes, there’s simply no question in my mind that ice cream is that food. It makes me?feel like I’m going to spontaneously combust, and my heart rate races up to resting levels I’ve never known (over 60 bpm, wow, getting up almost to normal!).

I certainly believe that I would have fared much better on the gelato diet (don’t worry, I’m not considering this!) than the milk diet, having more metabolic stimulation with far fewer negatives such as congestion, constipation, increase in allergies, etc.

Anyway, I’ve tremendously enjoyed the metabolic stimulation of Talenti Gelato as of late. The coconut flavor is excellent and full of coconut, which I view as a metabolic bonus ? especially for you coconut oil haters. And recently I tried their Sea Salt Caramel flavor which, to those that haven’t been pounding fruit and juice for over a month, would find disgustingly sweet (it’s only 39% fat by percentage of calories). But when the first 6 ingredients are caramel, milk, sugar, cream, eggs, and coconut oil ? ya can’t complain. Sure, there are some gums added to it, but ultimately I’d rather eat guar gum and feel good than eat Haagen-Dasz and feel congested and have chest pain (I’ve noticed that adding sugar to dairy can really improve my reaction to it ? the more sugar the better).

Anyway, that’s about all I have to say about that. I certainly get excited about the prospect of having the 180DegreeHealth metabolism enhancement program discussed in how to RAISE YOUR METABOLISM?containing a new element of total lenience and the incorporation of a lot of ?favorite foods? such as ice cream, pie, fruit juice, fruit, and so forth that were previously excluded. This would open it up to a much broader segment of the population in need of metabolic health enhancement, remove a lot of the intimidation and inconvenience behind the program, and create much deeper psychological and emotional healing with people’s relationship with forbidden foods. Recently watching someone lose four pounds in two weeks with a visible reduction in hypothyroidism-induced edema around the eyes and cheeks eating half a pie for breakfast and gelato for dinner has been an eye-opener (no pun intended).

Soon we’ll discuss some of the unique properties of sucrose that really intrigue me, one in particular that Ray Peat (poor sucrose’s only fan) has not discussed as far as I’m aware, that I have personally overlooked since the beginning, and what I find to perhaps have the greatest significance.