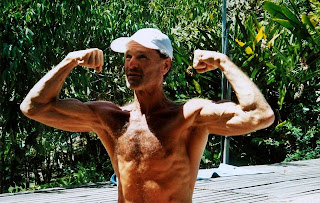 In the world of health and nutrition, there is not much out there that is wackier than Doug Graham’s self-fabricated 80-10-10 raw vegan diet. Don’t get me wrong. I have actually been positively influenced by the diet in some ways, and have reviewed all of Doug Graham’s materials as well as that of many of his even wackier disciples ? including Durianrider of http://www.30bananasaday.com/ as well as Fred Patenaude (this guy actually appears to be sane), Michael Arnstein, Adam Panetta (kinda cool), and a handful of others. Heck, I’ve even watched a few videos by the Raw Brahs. They helped me to overcome my fruit phobia, which has proven to be a plus in my own personal healthscapades as of late.

The incorporation of absurd quantities of calorie-rich fruit and juice in my diet has decreased my allergies to pet dander, improved my breathing/asthma, cleared my nasal passages to such an extent that one person contacted me to tell me of the noticeable difference in my voice vs. older videos, improved the warmth of my toes (which occasionally felt slightly cool and clammy), gave me an increase in vascularity and vasodilation, and improved my exercise performance and recovery (although I’ve been doing very little lately other than chasing a Frisbee). I would also say that my skin looks noticeably younger, and, even though my teeth felt much worse for the first month or so ? my teeth feel about the best they’ve felt in the last several years (still brushing only a few times per week).

So yes, these 80-10-10 folks are not totally out of their minds, and I have no doubts that athletic performance can in many cases be made superior by a very carbohydrate-heavy diet. But, there is an extreme darkside to this diet. That’s what I want to discuss. There is plenty of 80-10-10 worship going on out there in the fruitarian inner circle. A heavy dose of both skepticism and reality is what I hope to offer here for those out there who are perhaps following that diet and having some health challenges come up. Hopefully this post will be a voice of reason for those finding the diet lacking, and who are only being told ?you’re not doing it right, you’re not doing it right? every time a problem arises.

Let me spell out the basics of the potential perils one could face on this diet and lifestyle promoted by Graham and his crackers?

My research has led me to believe that preserving a high metabolic rate and high body temperature is the essence of good health and delaying the aging process. You can read about that in how to RAISE YOUR METABOLISM. But Graham, in something he titled ?Cool Runnings? talks about how his diet and lifestyle helps to decrease body temperature to what he feels is the ideal body temperature ? about 93 degrees F (similar to the tree sloth ? the mammal with the lowest body temperature). It is true for the purposes of running or any endurance activity as I’ve stated many times before ? for best performance you want your body temperature and resting metabolism to be as low as is humanly possible. As you lose body fat to very low levels, typically body temperature plummets due to the drop in leptin. As you lose muscle mass either from a low protein diet, low-net calorie diet (raw food is less absorbable than cooked food), or endurance exercise ? body temperature falls even more. These are all adaptations that make it easier to perform endurance exercise because it enables a person to burn fewer calories per mile. The fewer calories you burn per mile, the less effort it takes to travel long distances ? and the fewer calories you burn per mile, the longer you can travel on one ‘tank.

I think this is one key, fundamental reason why those who stop doing endurance exercise due to burnout or injury tend to gain fat at an incredible rate ? but that is another conversation?

If you are an endurance or ultra-endurance athlete like Michael Arnstein ? your performance will be enhanced by eating a diet that is so incredibly effective for stripping away both body fat and muscle mass due to the extremely low levels of protein being taken in. From that vantage point, you can see why a fruitarian-ish diet would be a strong performance enhancer. It is the ultimate catabolic diet in which adequate energy for exercise is still being supplied (unlike just doing a water fast, which makes exercise impossible).

But this comes with metabolic penalty. When the metabolic rate falls, you notice things like being cold all of the time and having freezing cold hands and feet even in warm temperatures.

With a low metabolism, especially in the context of a vegan diet which greatly limits the body’s ability to manufacture cholesterol (the precursor to the steroid hormones), the rate of cholesterol conversion into highly beneficial, pro-longevity, pro-fertility, pro-sex drive, anti-autoimmunity hormones such as pregnenalone, progesterone, DHEA, and testosterone becomes greatly reduced. With this you see a predictable decline in sex drive in both men and women over time, lack of menstruation in women and other menstrual irregularities, and a host of other problems including a loss of skin elasticity and accelerated aging. You can see Arnstein talking about lowered sex drive here ? a result of being overly lean, extreme fat restriction, catabolic endurance exercise, and other facets of his diet and lifestyle that is a perfect anti-fertility cocktail?

In terms of aging ? while Doug Graham has an astounding level of fitness, athleticism, and agility for a man in his late 50’s, and I wouldn’t hesitate to take lessons from him on performing functional exercise for that purpose, comparing a recent video of him to a video 10 years ago…

?One has to wonder if Graham is competing for the title of world’s most rapidly-aging man. People who have met with him in person describe his skin as being extremely reptilian and aged ? something he blames on sun exposure. Oh, the diet is healthy as long as you stay out of the sun! Whee! Sounds awesome!

Keep in mind that Graham’s response to the diet is presumably the best-case scenario. Just like Sisson,’this is a?naturally healthy, elite athlete we’re talking about here – which isn’t always a result of the their diet and lifestyle nor can others expect similar results even if they do happen to be good (in Graham’s case,I would argue the results are not good, but I don’t give a flying rat’s hiney about?how many pullups a person can do – especially if they die?of a stroke before age 65, my official prediction for Graham).

With 80-10-10 you also see quite a bit of silliness, and the perpetuation of the belief that diseases like cancer are a result of eating impure or cooked foods. Nonsense. Cancer appears to be primarily a defect of cellular respiration and energy production ? a result of having a low body temperature, low production of the hormones of youth like DHEA and progesterone, and an impairment of the mitochondria’s ability to produce energy. Sure, many toxic compounds and estrogenic chemicals in the environment can do this. I’m not discounting that. But you can surely achieve this carcinogenic state without ever taking in a single bite of non-organic or cooked food. Having metabolism fall as it does in aging is what predisposes someone to cancer. Being old is the leading risk factor for cancer for that very reason, as a lowered metabolism is the body shutting down.

Of course, just having a low cholesterol level is a much greater risk factor for stroke and cancer than having a high level of cholesterol is a risk factor for heart disease. It’s not like, by having a low cholesterol level, you are somehow protected against disease. In many cases, it is quite the contrary ? especially on something like Graham’s 80-10-10 raw vegan diet in which cholesterol and fats are so restricted that the amount of cholesterol needed to synthesize steroid hormones properly is so limited as to cause the body to methodically shut down given sufficient time.

So whatever, I’m not going to go on and on about Graham and his crackers. Just remember that there is much more to health than losing some body fat and having your fitness levels improve in the short-run on 811rv. Fitness is certainly not a gauge for health as the recent death of the marathon queen Grete Waitz shows?
http://www.latimes.com/news/custom/scimedemail/la-me-grete-waitz-20110420,0,3207916.story

Short-term results and long-term results are often the exact opposite. If feeling better in the short-term was the key to health, we could all just take drugs. But unfortunately there is hell to pay for taking such a route, and I believe from what I’ve experienced, studied, and heard from others ? that 811rv has a dark side that rears its ugly head in the long-term, usually starting with small things like lack of morning wood, coldness, and disappearance of the menstrual period followed by an escalation into much more serious health problems like anemia, infertility, hair loss, severe digestive problems, frequent illness/immune disorders, autoimmune disease, and any number of other strange complications.

More importantly, this diet is totally unproven, the brainchild of just one human being’s conclusions and a handful of mostly emaciated-looking devotees support, is totally polluted by a religious championing of vegan diet and lifestyle, and is a historically unprecedented diet for human beings, which instinctually would never eat a 95% fruit diet even if fruit was available in unlimited quantities. Add those together and you have the word ?RISKY.

But hey, thanks for showing me that fruit is a health food and that sugars can be friendly in the right context. I, as well as dozens of others that have been piling my email inbox high with thank you’s and pro-sugar testimonials over the past month are very thankful.

Oh and hey, apologies for any condescending and self-righteous tones in my writing as of late. You must understand that my young and impressionable mind was brainwashed by this kind of stuff as a kid? ?I’m hot, and you’re not. You wanna hang with me I’ll give you one shot??