This post could be titled any number of things. Originally I had thought to call it Low Carb Honeymoon, as I have referred to that window of amazing energy and effortless, lean-tissue sparing fat loss experienced by many on their first flirtation with carbohydrate restriction. But carbohydrate restriction is really just one way of achieving an adrenal hormone buzz that provides unfathomably good results in the short-term while mysteriously disappearing later on. Another is rigorous exercise. Another is fasting or intermittent fasting. Then you have just plain calorie restriction ? which usually feels awesome and invigorating before the crash landing. Stimulants will do the trick as well. Ephedra was an amazing supplement for many people from what I understand. A happily-ever-after? I don’t think so.

Each of these techniques or diets relies upon one thing ? and that is a rise in catecholamines. Catecholamines collectively refer to the stimulatory adrenal hormones ? mostly epinephrine and norepinephrine. These hormones, when released, cause a rise in body temperature, a rise in mitochondrial activity, an increase in mental acuity, cognition, and alertness (or at least the feeling of being sharper even if you really aren’t), a huge rise in physical energy, the release of fat tissue from fat cells, a drop in appetite, and weight loss while feeling not only good ? but far better than normal.

That’s what I experienced on low-carb (roughly 100 grams per day, which is different from Atkins induction levels of carbohydrates which can cause lean tissue losses), along with other unmistakable facets of being in a high-catecholamine state such as being incapable of sleeping for more than six hours per night, never feeling tired or so much as yawning during the day, having true Energizer bunny vitality, seeing a disappearance of allergies/asthma, having a disappearance of aches and pains, being in an absurdly good and stable mood, and so on. It was awesome. I thought I was Superman.

But guess what happens when you chronically elevate your adrenal hormones for months on end? Your adrenal gland receptors (adrenergic receptors) tend to downregulate, and all that circulating adrenal juice starts to become increasingly ineffective. In fact, the subjects of Ancel Keys’s calorie restriction study, by the end of the 1,700-calorie feeding period, were almost completely unresponsive to adrenaline injections!

?In 40 persons who received subcutaneous injections of 1 mg. of adrenalin there was extraordinarily little response to the drug.

Either those adrenal receptors close (which is why stimulants are addictive, you feel tired when you are not on them after prolonged use,?and it takes increasingly larger doses to get a high from them), or those glands themselves just get tired and start to shut down. Suddenly you start to get grouchy. Fat not only stops falling off of your body, but comes back. Your energy levels fall. Your blunted appetite becomes an insatiable appetite. And in my case, my asthma returned, I never felt rested no matter how much I slept, my skin health ? once dramatically improved began to erode with breakouts here and there even while eating ?cleanly,? and more.

Repeated bouts with high levels of exercise have resulted in the exact same short-term high followed by a long-term low as well. Intermittent fasting I suspect to be capable of the same ? as it most certainly raises catecholamine levels which is precisely what makes it so effective for blunting appetite, burning fat, and keeping metabolism elevated (initially).

RRARF, a protocol I’ve laid out in the THIS BOOK to counter each one of those high adrenal dead ends, is the perfect antithesis to each one of those paths. As the most astute health and nutrition researchers understand, such as Lyle McDonald, overfeeding, especially when it is high in carbohydrates and paired with lots of sleep and physical inactivity, lowers catecholamine levels as well as cortisol levels ? another adrenal hormone that works against someone looking to improve their health, vitality, and body composition.

By dropping the levels of all these adrenal hormones, you allow your adrenal glands to heal themselves, and you allow the adrenergic receptors to upregulate as well, making those adrenal hormones much more effective the next time you go to use them. Plus, you get to optimize the output of your thyroid and sex hormones which is another major advantage. Lastly, overfeeding is a hell of a way to increase lean body mass, particularly once you’ve continued it for a substantial amount of time. In fact, several people have reported seeing continual rises in weight with pants fitting more loosely as time goes by ? indicative of the bodybuilder Holy Grail state of positive calorie balance and negative fat balance simultaneously (losing fat while eating more calories than you are burning).

But RRARF, and overfeeding in general, is a rehabilitative strategy. Like I’ve said since the beginning, there are no health awards awaiting those who manage to eat the most food and exert the least amount of physical energy in their lifetimes. Rather, it’s taking a timeout to heal up before you try to move forward ? especially when it comes to making attempts to improve your body composition.

Having said that, there will a considerable amount of focus coming up this summer on body composition, and how the effective strategies used for losing body fat (low-carb, IF, exercise, etc.)?can be used in a way that potentially avoids the pitfalls or the dead ends of just simply ?going on a low-carb diet? or ?exercising a bunch.

A quick summary of those that have the best results reveals a theme emerging almost immediately ? losing body fat must be done by raising the catecholamines. However, to keep your body from adapting to the surge in catecholamines, you MUST NOT be in weight loss mode 7 days per week. That’s why it’s the half-time dieters that manage to lose fat without (as much) negative consequence.

Part-time dieters can be filed into four basic categories?

With carb cycling, you lose fat with a big rise in catecholamines while low in carbohydrates ? then you eat tons of carbohydrates periodically throughout the week (once every 3 days for example, or once every 3 meals in the case of Jay Robb). This prevents adaptation somewhat, and allows you to get away with more fat loss than you would otherwise be able to get away with ? and less rebound. You can also gain muscle on your high carbohydrate days and make some big changes to your appearance.

Re-feeders are basically cycling calories. They may spend 5 days losing weight, and 2 days gaining weight each week. By timing your overfeeding days with a good weightlifting session and extra carbohydrates, you can ensure that more of your excess calories end up in muscle tissue than fat. By keeping carbohydrates somewhat low while doing long-duration, low-intensity exercise during the underfeeding days, you can lose more fat than muscle while underfeeding. Thus, each week you can literally gain muscle and lose fat, and do so with minimal adaptation on behalf of your body.

Intermittent fasters are losing fat very rapidly while blunting appetite during the fasting period. Once again, this is due to big rises in catecholamines primarily. However, you’d destroy yourself in a hurry if you overdid this ? and the fat loss/high catecholamine period is met with big meals and some good rest ? usually following a workout in which you are burning maximal amounts of fat (towards the end of a 16-24 hour?fasting period).

Then there are the exercisers, who raise catecholamines and burn fat during exercise, and lower catecholamines and replace fat after exercise. Those who do the most exercise and rest the least, lose fat the fastest but do the most damage and cause the most metabolic adaptation. Once again, you need both fat burning/high catecholamine spurts followed with rest and rehabilitation for it to work long time without working you over.

The best out there currently appears to be Martin Berkhan of http://www.leangains.blogspot.com/ 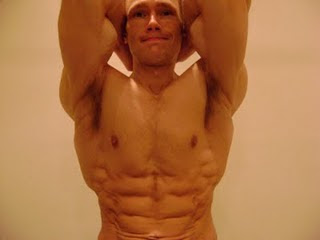 Martin does just a small amount of exercise (a few hours per week), which he times with big periods of overfeeding, including lots of carbohydrates, for maximal muscle growth following the workouts (carbohydrates, when paired with protein, provide better protein deposition into muscle cells). He has even been known to eat entire Cheesecakes at one sitting ? not something you’d picture being a habit of someone with 5% bodyfat, but, done intelligently with the right timing, may actually be effective for fat loss and improving body composition.

The rest of the week, he eats a more low-carbohydrate, high-protein diet (but not ketogenic, which is important) while going long periods (16 hours) without food each day. He calls this Intermittent Fasting, but it’s not truly intermittent fasting. I would call it ?decreased meal frequency,? and I suspect it would be just as effective to eat 3 meals per day spaced 6-7 hours apart (the first 3-4 hours after meals are a low-catecholamine period? after that you are burning fat ? so the longer you go between meals and snacks the more fat you will be burning) as it would be to skip breakfast to increase the fasting period. It would certainly achieve some of the effects, and would be a little easier on the adrenals for those that really have issues there ? which includes a great many people who have flocked to 180D no doubt.

Anyway, some food for thought for those who feel they have really rehabilitated themselves from some of their dietary and heredity follies, and are inspired to pursue a little risky narcissism.

I personally will be doing a very high volume of exercise over the summer because I love hiking (… and fishing – and I have to walk a long way to find fish as big as the one in the photo below dumb enough to?go after?what I throw at them), but high volume exercise like that (15-20 hours per week most weeks) is too much to attempt carbohydrate restriction or intermittent fasting with the delicate adrenals I’ve been dealt combined with the damage I’ve inflicted upon them thus far in my life. 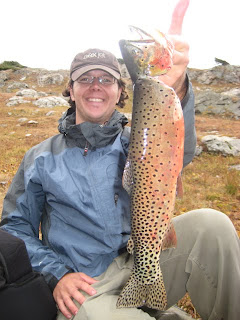 But you can bet I’ll be having some good rest days with big calorie surpluses and unfathomable amounts of carbohydrates. This will both prevent negative consequence and improve performance out on the ol? trail. (Note, on low-carb my hiking performance was the worst, the aftermath was the worst, but my body composition was by far the best? impressive body composition doesn’t necessarily = health).

More to come in the months ahead as I continue to review the works of:

? and a handful of others who are implementing some of these ‘smart? approaches to fat loss without the standard pitfalls ? the greatest of which is the high-cortisol and/or downregulated adrenergic receptor rude awakening.

But please don’t get overly-seduced by any of these authors or the programs they recommend. As you’ll see in the comments section of this post I’m willing to bet, there are people who had both great and catastrophic results on each and every one of the strategies discussed above.