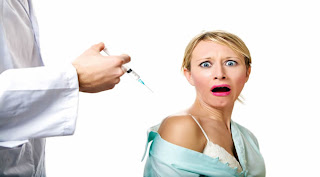 I tried for nearly six months to get my dietician friend Ariel to write a post about her first-hand experiences working at an HCG diet clinic. But she isn’t really a writing machine, and has been busy. Suffice it to say, she decided to quit working at the clinic even though the money was great ? because the people being treated looked and felt ill, and were not seeing lasting results from the very expensive treatment.

What is HCG? HCG is a pregnancy hormone, and the HCG protocol and diet developed by Dr. A.T.W. Simeons is hotter than Kristen Stewart. Or, in the international language of 80’s movie references, ?It’s the hottest thing since sunburn.

Basically, per the theories of Simeons, you inject the pregnancy hormone or, even hokier, have a little bit of the homeopathic HCG ‘spray? or’sublingual drops.With this you eat what could best be described as a ?protein-sparing modified fast,? known as PSMF. PSMF is basically a diet where you eat your biological requirement for protein (1 gram per kilogram of ideal body weight), eat enough carbohydrate to keep that protein from being converted to glucose (so it is used instead to help you maintain muscle mass ? roughly a half gram of carbohydrate for every gram of protein does this well), and cut virtually all fat out of the diet. This usually equates to no more than 500 calories per day, sometimes less ? although some HCG practitioners are allowing higher calorie intakes ? like Tuscon, Arizona Naturopathic Doctor Garrett Smith (who follows this blog and who I openly invite to write an article on his personal experiences with HCG as a practitioner for submission to the 180 blog).

The idea is that, by supplementing with the HCG, following the precise diet, and following what is best described as a post-diet weight setpoint resetting period, you can ?get away with? losing the weight. In other words, you can lose weight, keep it off, and do so all without a drop in your metabolic rate. In addition, the HCG ?pregnancy hormone,? despite many pregnant women wanting to eat the ass end of a cow with pickles and banana custard all over it, supposedly helps to kill hunger.

Sure enough, most people who try the HCG diet and are substantially overweight, note very little hunger ? often less than normal. Energy levels soar. They feel great, lose weight rapidly, and rave about the diet. The internet is littered with hip-hip-hoorays for how effective the HCG is.

And for some, it surely does seem effective for losing weight and keeping it off ? at least for a year or two. But from what I gather, most follow it once and do well. It almost has a rejuvenating cleansing effect to do this type of diet for several weeks or a month. I mean, you are cutting out all things like excessive polyunsaturated fat, many allergenic foods presumably, food additives, and who knows what else. You are eating real foods ? mostly lean protein and vegetables.

But ultimately, those who try round 2 and beyond find it’s not as good as the first. Yet they keep trying it and trying it. What might have potentially been benign or even beneficial at first turns dark. Typical dieter’s symptoms like hair loss, loss of libido, poor wound healing, autoimmune disease, constipation, food allergies, nutrient deficiencies, low metabolic rate/body temperature ? these things start to set in just like you might see in someone who has undergone bariatric surgery or suffers from an eating disorder. At least that is my impression from the dozens of communications I have received about it since people began begging me to write about this subject a couple of years ago.

But I’d certainly champion it over getting bariatric surgery. Hell, I’d even recommend the incredibly ridiculous 5-Bite Snickers Diet over bariatric surgery! Or at least watching the video for comic relief!

Anyway, here are my unadulterated feelings about the HCG protocol?

The HCG injections are totally and completely bogus, do nothing at all, and are a way for practitioners to make lots of money ? while providing patients/clients with a powerful placebo.

But if people aren’t hungry on this diet and feel great, then clearly the HCG must be doing something!

I don’t think so. It’s been known for 80 years now that doing a protein-sparing modified fast in which muscle mass is not lost has the exact same effect as reported by HCG dieters. In a 1931 study conducted by Frank Evans and J.M. Strang entitled ?The Treatment of Obesity with Low Caloric Diets,? the 187 obese subjects following the 400-600 calorie protein-sparing fast noted dramatic improvements in energy and vitality and very little hunger?

?The subjective changes which the patients reported constituted some of the most striking clinical results of the treatment. Contrary to their expectations, they were not weak and hungry. It was rare for a patient to complain of hunger after the first two or three days. In fact, one is astonished by the unanimity with which patients reported a return of vigor, a feeling of well being and resistance to fatigue which had been lost for months or even years. A great variety of obscure symptoms and minor ailments disappeared. Headaches, which afflicted so many of these patients, some even migrainous in type, were relieved in every instance, and usually within the first two weeks. Dyspnea and orthopnea diminished rapidly. Minor skin disorders were frequently relieved. Intertrigo disappeared or became easy to control in every case in which it was found. In one case, diagnosed epidermophytosis, and in another presenting such annoying pruritus vulvae that oxyuris infestation was seriously considered, complete relief was obtained in three and six weeks, respectively. The symptomatic improvement which all patients experienced far outran the rate of weight loss and was far greater than could be accounted for by the mechanical relief from a burden of from 5 to 10 pounds.


Accompanying the disappearance of unpleasant symptoms, there was very frequently an additional return of joie de vivre. This factor was of real significance in girls of school and college age who not only found a relief from a social semiostracism on account of the excess weight but also were again able to wear clothes of a style proportionate to their years.


The objective changes appeared somewhat more slowly. Very striking changes in the circulatory apparatus were among the first to appear. The rapid depression of elevated blood pressures was one of the commonest and earliest signs. Changes in the skin were always noted when any large loss of weight was secured.

In the study, the subjects, on average, lost roughly 3.5 pounds of pure body fat per week for 20 weeks ? an average of 77 pounds of fat loss. They had no losses of nitrogen or creatinine, meaning that they showed little to no signs of starvation and lost zero lean tissue.

So I’m calling bullshit on the injections, as many have since Simeons conjured up the idea to give them decades ago. The diet component itself, which seems to obviously be the source of this success, is probably too good to be true as well. Obesity studies show that, regardless of how much weight is lost or how it’s lost, the fat tissue itself seeks to be restored, and brings about a series of hormonal and enzymatic changes that ensure your body stores more food than it burns until fat stores are fully replenished or worse within a year or two. There is no known long-term ?cure? for obesity other than eating to appetite of healthy, nutritious, whole foods and being physically active while keeping your fingers crossed (as this works for some, and doesn’t work at all for others).

Furthermore, Evans and Strang note that the subjects with low thyroid function were often losing as little as one pound of body fat per week, and were seeing substantial drops in metabolic rate compared to what should be normal for people of their height, weight, age, and gender. While in 1931 the number of subjects who fit this description was very small, I have every reason to believe that the number of people with a subnormal metabolic rate (indicated best by a body temperature well below the ideal 98.6 degrees F or above) has dramatically increased in the last 80 years just as Broda Barnes observed ? not to mention thyroid seems to drop with each repetition of dieting (and today’s typical obese person has done dozens of them by the time they reach morbid obesity).

If you are dangerously obese (like over 400 pounds) and desperate ? facing serious health complications and even death, then it’s something to give a shot and will be a lot safer, easier, and ultimately more effective and healthy than bariatric surgery or continuing on the weight-gaining path you are on. But you don’t need to inject yourself with anything. That smells like a scam to me.

And note, the diet employed by Evans and Strang worked because the lean tissues of the subjects were feasting on their fat tissue, which supplied 1,500-3,000 calories per day. If you are not very fat, eating a diet like that will cause hunger, complete loss of energy and vitality, and substantial loss of lean tissues ? potentially doing irreparable harm to your metabolism.

?Diets containing 1 Gm. of protein and 0.6 Gm. of carbohydrate per kilogram of ideal weight and no fat, other than that inseparable from the protein ration, afford menus of from 400 to 600 calories on which these patients lose weight rapidly.


The patients are not hungry. They report an increased feeling of well being and resistance to fatigue. Headaches, minor disorders and frequently dysmenorrhea are relieved early in the period of dieting.


The satisfactory clinical results are obtained because only the inactive excess fatty tissue is being removed. The vital tissues are not wasted as in starvation, as shown by careful studies of oxygen, nitrogen and creatinine metabolism.