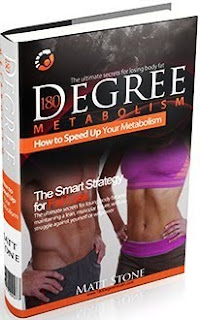 Well, it’s officially done, and was no small feat.  146 pages of good lovin’ – the new 180 Degree Metabolism: The Smart Strategy for Fat Loss.  Why “strategy?”  Well, cuz you don’t rush into the “fat loss phase.”  You get “primed” first.

But ultimately I do believe that raising the body temperature first (restoring leptin sensitivity) will be the key.  It will be what triggers the body to “allow” fat to be released without the typical famine response seen in every weight loss ward in which overweight and obesity has been studied.

Personally, I’m down 7.5 pounds on the year so far, all of it fat – and not only is my body not revolting to the weight loss, I actually seem to be picking up steam.  Hunger is absent, and no signs of the metabolism slowing down have reared their head whatsoever.  Energy up.  Libido’s good.  Mood stability is excellent (well, there were a few milk duds the other night and the next day was a little odd, but…).

Anyway, to make reading this beastly book irresistible, I have no choice but to cruelly present to you the 180DM QUIZ that concludes the book, but withhold the answers, which are locked away inside the book (the answers are pretty obvious though, and I’m sure there will be some “guesses” in the comments section).

By the way… CLICK HERE to go to the shopping cart where 180DM can be purchased.  If you have already purchased the orginal version, or the 180 Collection, check your e-mail for the url to the new book.  If you have purchased it either way in the past, and DIDN’T receive an e-mail, please let me know at sacredself@gmail.com

1) Vanessa has been dieting for 27 years and weighs 330 pounds. She should now try to:

a) Do Weight Watchers (again)
b) Try Atkins (again), but try harder
c) Order food from Nutrisystem because Dan Marino said so
d) Extend her middle finger to all of the above

2) Lindsay has been going back and forth between low-fat vegetarian blogs and low-carb Paleo blogs, and has become very confused about what she should eat for health. It seems both sides have very intriguing and well-supported claims. She should:

a) Take the best of both sides and eat lots of animals and plants
b) Never visit either site ever again, smashing her computer with a hammer if need be
c) Stop reading diet books (other than ones written by the almighty Matt Stone)
d) All of the above

3) Antoine’s mom has diabetes. His dad died of a heart attack at age 57. He REALLY wants to be healthy, and has read that consuming too much fructose can lead to health problems that he knows he is hereditarily disposed to get later in life, but he didn’t sleep well last night, has a headache, and can’t stop thinking about ice cream this morning. Antoine should:

a) Go on a 5-mile run
b) Follow Dr. Mercola’s advice and tap on his forehead until the craving passes
c) Eat the F%#@ out of some ice cream, eat balanced, nourishing meals throughout the rest of the day, and go to bed earlier
d) Eat only eggs for a week to bring his insulin levels down

a) Panic and run to the pharmacy to have an old thyroid medication bottle refilled
b) Start taking Hydroxycut or other ‘thermogenic? weight loss supplement
c) Do the Master Cleanse (the lemonade diet thing)
d) Eat as much nutritious food as she can, get as much sleep as possible including naps, and quit going to the gym until her temperature has risen

5) The best indicator of how much food you need to eat in a day is best determined:

a) By your hunger levels
b) By your body temperature
c) By how you feel ? your energy levels and such
d) All of the above

6) The Atkins diet, if you use all organic foods, is a guaranteed way to lose weight with no risk of slowing down your metabolism.

7) The hormones leptin and adiponectin are just scientific mumbo jumbo. People are fat because they are lazy, have ‘thrifty genes,? and have no self-control.

9) Matt Stone, the author of this book feels a little bromance towards Jon Gabriel and totally has a crush on Diana Schwarzbein, which is why he quotes and references their work so heavily.

10) After reading 180 Degree Metabolism, only an imbecile would eat a highly restricted diet, battle cravings, and try to consciously manipulate the calories in/calories out equation.

A certified personal trainer that advocates a low-calorie, low-fat, high-protein diet with no saturated fat and no dietary cholesterol and recommends that you wear a pedometer to keep track of your physical activity for purposes of estimating daily calorie burn is walking towards a pack of hungry lions. You should:

a) Warn him about the lions
b) Join him in trying to outrun the lions for a good cardio workout
c) Tell him to come over and give you some more advice on how to cut calories from your diet so that you can ?lose weight and feel great!
d) Excite him by waving his favorite 100-calorie soy-protein snack bar in the air, and then throw it in the general direction of the lions, shutting the door behind him