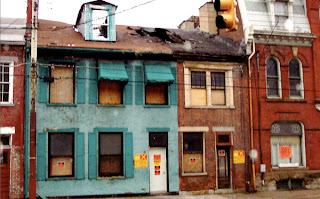 So why exactly have I journeyed up to the dilapidated town in West Virginia known as Wheeling, where tattooed rednecks walk around with no shirt through city streets, where the Klopeks would be scared of their neighbors ? and would have the best kept house in town… 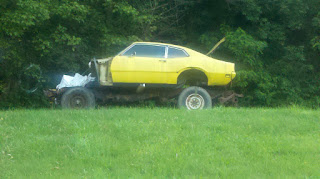 …where cars like the one shot with my phone are parked on lawns, where some of the world’s most unnattractive and physically debilitated Americans can be found ?wheeling? up and down the streets in wheel chairs like a scene out of Wall-E?

Well, because Carey Reams (who?looked a lot like Harry Caray, coincidentally ? maybe I’ll start calling him Harry Carey Reams) spoke to God and God gave him an equation for the numbers you should score on a bunch of pee pee tests, that’s why! Reassuring isn’t it?? Holy Cow!

Today, for the first time, I meet with Challen Waychoff II, practitioner of a very purist form of RBTI ? Reams Biological Theory of Ionization. And trust me, I’ve got more red flags flying than China during a big parade. More red flags flying than even Canadians visiting a foreign country to distinguish themselves from Americans (we really hate it when you do that by the way).

So why in the name of all that’s Holy would I make such a great effort to check this wacky stuff out?

I’m making the effort because Challen has such great mastery over the RBTI that he can look at some pee pee test values from anyone on earth, near or far, recite their medical history more or less, and then proceed to bring their ?numbers? to the ?healing range? within a week. This has been a consistent report from the people I know who have been working with him this year, which includes one of my most trusted informants ? ol? Pippa Galea, who is one of my best personal friends on the planet, and who has been following my writing since before I even began blogging (although,?after seeing Wheeling?I’m thinking of ending the friendship!).

But none of that really impressed me. What really got me was that Challen could reliably tell when a person deviated from the eating regimen he laid out for them, and even tell what they ate to cheat and roughly what time of day they ate it ? even if it was just a miniscule amount of something forbidden on the Reams program (like say, chocolate or canola oil).

I mean think about the power in that? With RBTI you are looking at a slew of tests that can be ascertained with home testing equipment. Using an agricultural tool called a refractometer you get a measurement of overall carbohydrate in your urine. With pH strips you get your saliva and urine pH levels and see what they are in relation to one another. You test other things as well, such as dissolved ‘salts? and albumin.

So Challen, looking at what these numbers are and the relationship to one another, sees sort of a fingerprint that is unique to each individual but at the same time shows a host of general and, depending on level of mastery and understanding of this cultish RBTI, specific information.


?Yes, I had two chocolate chip cookies that night.

Not only that, but using this information he can forecast a lot of what a person is going to go through as they undergo the healing process ? also with freakish and difficult-to-believe accuracy.

Anyway, I’m keeping my skepticism flying mightily. As should any readers of the many articles I will soon write on my Wheeling dealings. But, knowing how powerful this knowledge could really be, and that he clearly possesses knowledge in an area of using nutrition that I do not, I’m eager to learn as much as I can and hopefully discover something very useful.

I’m attracted to the idea because of the general mantra of Reams, which is ?Why guess when you can know??

To me, gathering real observable data and using nutrition with surgical precision to bring that data into a harmonious balance is the ultimate use of nutrition. It’s basically doing what Western Medicine attempts to do with their endless array of blood and hormone tests, but foolishly and unecessarily using medication in isolation to tweak those ?numbers. With the human body, this doesn’t work very well, and comes with consequences. The RBTI, however, is about bringing several markers of good function into a synergistic alignment, stepping back, and watching how well the body heals itself from illness under those ideal conditions. At least that’s it in theory.

And, if the theory works even slightly like it ideally is supposed to, it would really be amazing. To me, the concept behind taking real numbers and, like I said, tweaking them with ‘surgical precision? using nutrition would be by far the most sophisticated, scientific, and reliable use of nutrition out there. Otherwise people just keep volleying back and forth between diets getting relief in some areas but causing problems in others, only to reshuffle the deck with a totally different diet and get a very different, but still mixed, mediocre hand.

And I think what is one of the potentially coolest things about it all, is that RBTI was designed specifically to achieve the type of healing a person might get from truly eating the perfect food grown in the perfect soil, but doing so using supermarket food. Regular old plain stuff that anyone can access.

And if Reams is right ? that all disease stems from an imbalance or lack of minerals in the body to stimulate proper energy production (not a bad argument as we know how instrumental minerals are for the pH and productivity of soil, the basis of all life, and how this directly translates to the health of the animals that eat food from that soil), then that would certainly provide a better explanation for why refined, mineral-stripped carbohydrates always seem to be there at the onset of modern disease.

Most importantly, it’s going to be spectacularly fun and interesting for yours nerdingly. I’ve never done anything quite like this. It was time for a good shock to the groin, and hopefully Challen is the man to deliver the voltage.